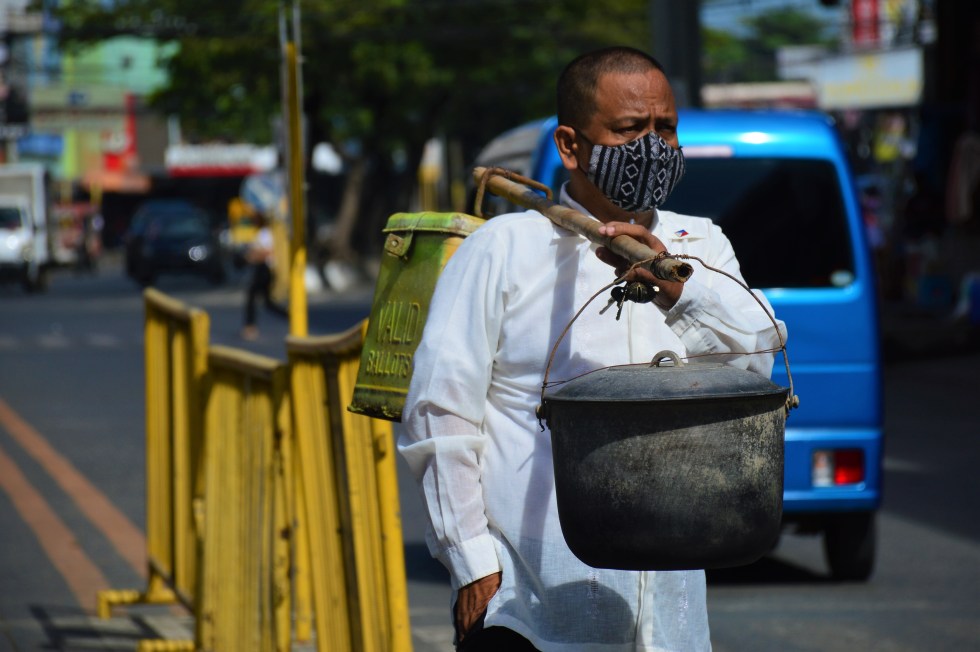 Local multi-talented artist Nicolas ‘Nic’ Aca has appealed to people through his street performance in Cagayan de Oro Saturday, May 7, 2022, not to sell their votes as millions of Filipinos are expected to cast their ballots in time for the national and local elections Monday, May 9. (Jigger Jerusalem/davaotoday.com)

CAGAYAN DE ORO CITY, Philippines — Wearing a long-sleeved white barong tagalog, slacks, and black shoes, Nicolas “Nic” Aca, 53, the multi-talented artist from this city could be mistaken for a politician or a lawyer, if not dressed for an event.

But he was seen in the middle of J.R. Borja Street, a four-lane road beside the Cogon public market, one of the city’s busiest thoroughfares Saturday morning, May 7.

He was carrying on his shoulder a small bamboo pole where a cooking pot is attached on one end and a discarded ballot box on the other.

Despite the heat of the sun and the danger of being hit by oncoming vehicles, Aca has a mission: to tell passersby “boto dili ibaligya” (do not sell your votes).

“This is my way of appealing to the people not to sell their votes,” Aca said after his performance, noting that he knows of many candidates who are highly-qualified and can serve the people better.

But, he lamented, the electorate will not give these “deserving candidates” a chance since they cannot provide for ‘ulan-ulan’ (drizzle), a slang term for money and food items received by voters from the political candidates’ campaign workers on the night before the Election Day.

Aca said that in today’s political landscape, only those who are financially capable to mount a campaign have a high chance of winning. What made it worse, he said, is the culture of “utang na loob” (debt of gratitude) where many Filipinos felt obliged to vote those who gave them cash.

“This has become a cancer and I hope the next generation will not adopt this practice. We must change it,” he said.

Aca is the current resident artist and gallery curator of the Capitol University’s Museum of Three Cultures. He also chairs the City Historical and Cultural Commission. He has been holding his street version of voter’s education for the past five elections since 2004.

In previous elections, Aca would roam the corners of the city’s business district. There were also times he would position himself outside the St. Augustine Metropolitan Cathedral to meet church goers.

“Juan dela Cruz is given P500 to P1,000 by the politician. That is only equivalent to a goto (porridge),” Aca said, adding the amount will not last for a long time.

Aca’s street performance included the cooking pot as props because it symbolizes the ‘goto’ and the used ballot box to remind people of their right to vote, and to vote for who they think are qualified.

“We must not sell our vote because it is sacred and we must choose the right candidates from the barangay officials to the president,” he said.

Vote-buying, he added, is a form of corruption that must be stopped.

“We must not wait for ‘ulan-ulan’ and ‘ayuda’ (government aid). We must do away with them. Most of us can still eat three times a day even with just ‘bulad’ (dried fish) and ‘ginamos’ (fermented fish)”, Sablaon added. (davaotoday.com)