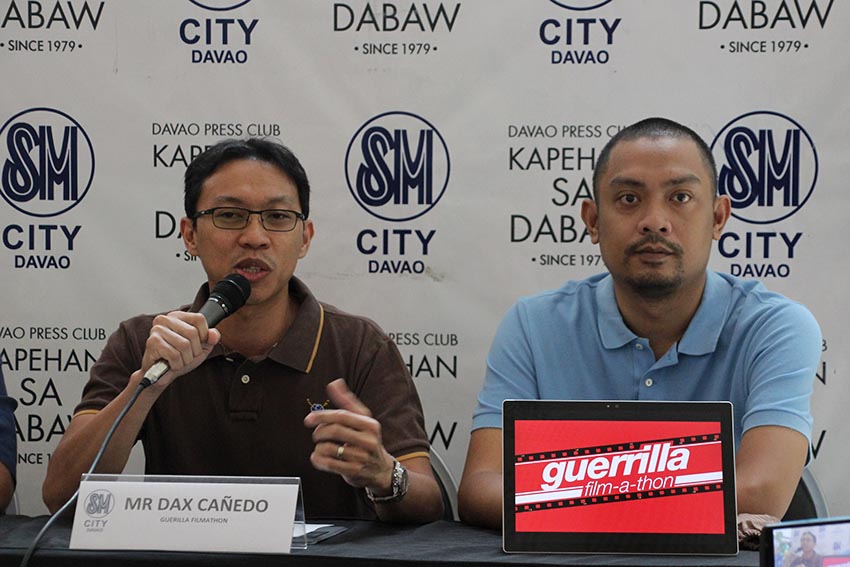 FILM MAKING WITH A TWIST. Filmmaker Dax Castañeda announces on Monday, Feb. 20 the “Guerrilla Filmathon,” a film making competition that will require filmmakers to complete a short film within 24 hours while going through a series of obstacles and challenges. The Guerrilla Filmathon is one of the events of this year’s Araw ng Dabaw celebration. (Paulo C. Rizal/davaotoday.com)

DAVAO CITY, Philippines — A film making competition where participants are tasked to complete a short film in 24 hours with “race-style challenges and obstacles” will be one of the activities for this year’s Araw ng Dabaw celebration, organizers announced in a press briefing here Monday.

“It’s a film making competition, but done in an ‘adventure race’ style. They have to finish their films within 24 hours and at the same time, they will go through obstacles and challenges,” Dax Cañedo, organizer and local filmmaker, said.

“This will be very difficult for the filmmakers, but it will be fun because they will go through different challenges such as rappelling, traditional Filipino games,” Cañedo said.

The competition will begin from March 11 to 12. There will be 10 competing teams and each team will have three members which already include a director and two crew members.

Each team may use any number of cast members, however, organizers emphasized that they could not participate in the challenges. The challenges and their locations will be announced by the organizers to all participating teams a day before the competition.

“We will look at their films, we’ll look at the quality of their works. We’ll see if they’re really capable of shooting a film withing 24 hours because that’s very difficult. If we feel that they’re qualified, then we will select them to be part of the top 10,” Cañedo pointed out.

In order to make the competition even more challenging, Cañedo also said the inclusion of “wild cards,” meaning random items, themes, or even character will be required from the participants to include in their stories.

“For example, we may require a certain type of character, let’s say, a man dressed as a clown. They have to include that in their story. They have to find a creative way of doing that,” Cañedo said.

“This is also to prevent participants from shooting in advance. They should only be shooting their films on the days of the competition, there will be no other time,” Cañedo added.

Interested filmmakers may go to The Guerrilla Filmathon’s facebook page to fill up a form, or email  guerrillafilmathon@outlook.com. (davaotoday.com)