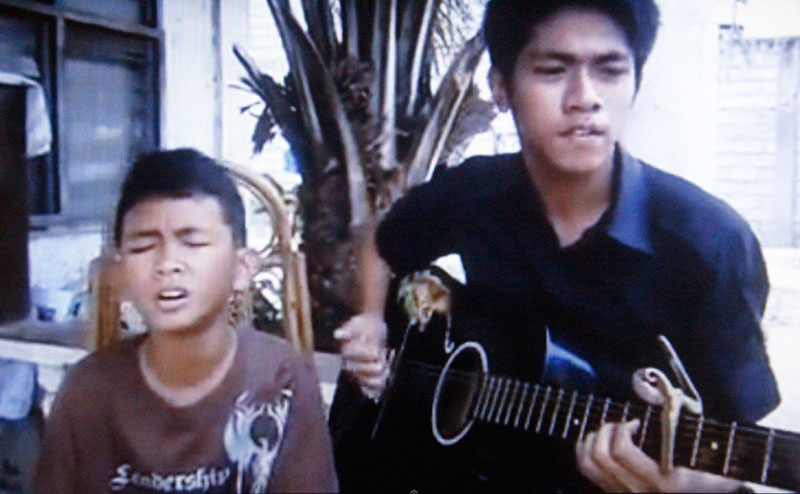 Aldrich Lloyd Talonding (left) and James Walter Bucong do the cover of Dance with my Father. (screen grab from YouTube video)

“We hope that the spotlight on Aldrich be also a way to shed some light on the situation and struggles of the Blaan people.” Kakay Tolentino, Katribu secretary general

DAVAO CITY, Philippines — Another Filipino talent has caught the attention of US talk-show host and comedienne Ellen de Generes, next to Charice Pempengco, Rhap Salazar and Zendee Rose Tenerefe.

The YouTube video of Blaan kid Aldrich Lloyd Talonding, 14 singing a cover song of Luther Van Dross’s Dance with my Father, has gone viral, touching the hearts of many, including De Generes, for his “soulful” rendition.

In this video, Degeneres was apparently impressed with Talonding and publicly invited him to come to her show and sing for her and the audience.

As of Sunday, the video uploaded by Talonding’s older sister last April 21 has gathered almost 1.5 Million hits.  Comments and praises were posted by social media users who can’t resist clicking the ‘Like’ and ‘Share’ buttons.

The indigenous people’s party, Katribu, expressed pride for Talonding’s talent as they are happy for the kid now gaining attention across the globe.

Talonding and Bucong reportedly received calls from the Ellen De Generes show four days after the video was uploaded on YouTube and prior to the international host’s public invitation.  They also received a formal letter of invitation that promised to cover their passports, airfare and meals, among others.

“If given a chance to be heard, indigenous peoples have much to say–and sing,” said Kakay Tolentino, a Dumagat woman who serves as Katribu’s Secretary General.

Tolentino said the recognition of lumads’ talents “is rare” given that they are in the margins and have little access to media.  She added they also suffer from discrimination as they have a culture and way of life distinct from the rest of the Filipinos.

Thus, the news about Talonding is “quite refreshing” as Blaans, according to Tolentino, only make headlines because of rights abuses, their struggle for their ancestral lands, and displacement due to mining and environmental destruction, among others.

In October 18 last year, Blaans Juvy Capion and her two minor kids who were fighting against the large-scale mining operations of Xstrata-Sagittarius Mines Incorporated were massacred by government troops in Fayahlob, Sitio Datal-ayong, Danlag village in Tampakan town, South Cotabato.

Last month, Daguil Capion, Juvy’s husband, announced that he has joined the New People’s Army.  Capion who has led a series of pangayaw (tribal war) against the mining company said his fight is not just to seek justice for his family but to protect the ancestral lands from foreign encroachment and destruction.

Katribu’s Tolentino hoped, though, that not only the talents of the indigenous people will be given due attention.

“We hope that the spotlight on Aldrich be also a way to shed some light on the situation and struggles of the Blaan people,” she said.  (Marilou Aguirre-Tuburan/davaotoday.com)