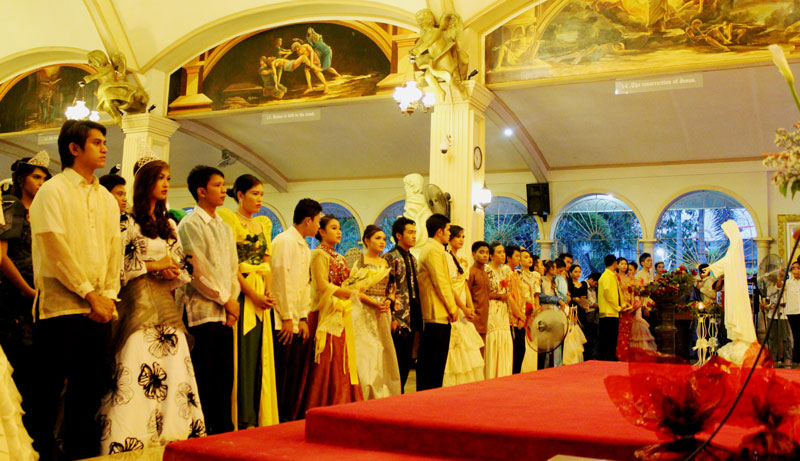 PRAYING FOR BLESSINGS. The 26 Sagalas pray before the Statue of Virgin Mary inside the church of Parish of Christ The Eucharistic King. (contributed photo by Kit Quilla)

Sagalas, according to Msgr. Ullysses Perandos, the Vicar-General of the Diocese of Tagum, should “emanate hope, faith and love with simplicity as these were the three virtues of the blessed Virgin.”

TAGUM CITY, Davao del Norte, Philippines — A Santa Cruzan where 26 sagalas clad in grandiose and detailed colorful costumes parading with their escorts through this city’s major streets, was the highlight, albeit concluding, cultural event of the fifth Flores de Tagumeño on Saturday.

Sagalas, according to Msgr. Ullysses Perandos, the Vicar-General of the Diocese of Tagum, should “emanate hope, faith and love with simplicity as these were the three virtues of the blessed Virgin.”

They were chosen by their own Gagmayng Kristohanong Katilingban (GKKs or Basic Ecclesial Communities) to commemorate the finding of Jesus Christ’s cross by Reyna Elena (St. Helene), the mother of Emperor Constantine.

Dressed in tailored-fit fancy and theatrical costumes, sagalas were to put emphasis on their portrayal of characters who symbolized queens of the past based on the religious texts.  Their costumes were made by fashion designers from both Tagum and Davao cities.

Anthony Pondo,18, expressed his excitement as this was his first time to join the event.  Representing the GKK- San Isidro Labrador, he was an escort of Reyna Judith.

Portraying as Reina Sheba, Cathline Bibero, 18, said it was her third time to join the Santa Cruzan. 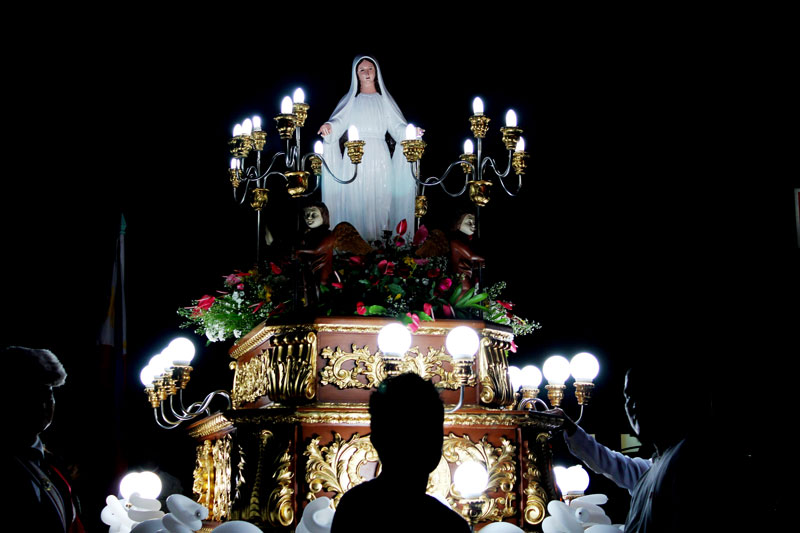 MOTHER OF THE CRUCIFIED CHRIST. The Statue of the Virgin Mary is being prepared by parish staff in time for the annual Santa Cruzan. (Contributed photo by Kit Quilla)

Pharmacist and photo-hobbyist Kits Quilla, who was also a former sagala, said Santa Cruzan participants were given rigid orientation through Basic Catechetical Formation administered by the Parish Catechists. Sagalas were given a lecture on the basic Marian dogma of the Church and all 26 virtues of the Virgin Mary were explained to instill the sacred values, she added.

Quilla also observed that this year’s Flores de Tagumeño, a religious month-long annual fiesta, was “grander and more organized unlike in year 2012.”

Flores, a Spanish word for flowers, was appended to various titles to connote the May Flower Festival honoring the Virgin Mary.  This tradition from Roman Catholic roots was replicated in various dioceses and archdioceses in the country.  Some of the titles were Flores de Mayo (Flowers of May) and Flores de Maria (Flowers of Mary), among others. 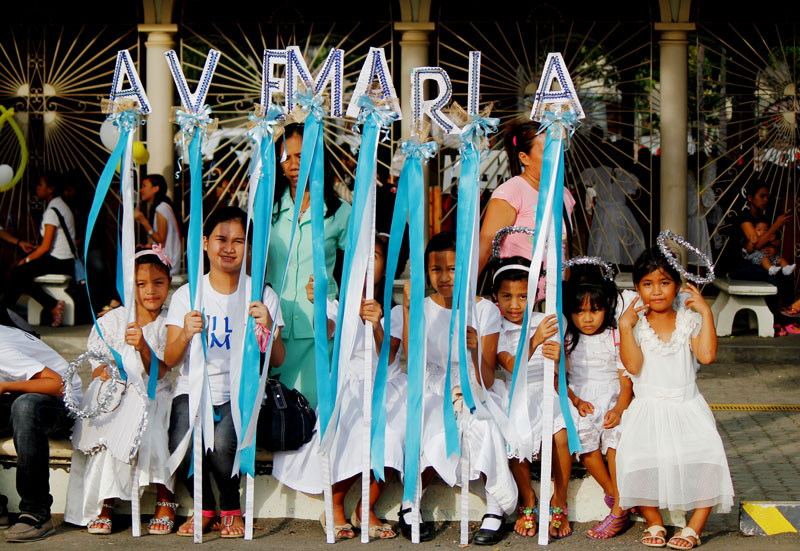 This year, the Flores de Mayo was participated by 32 GKKs from the Parish of Christ the Eucharistic King and the Quasi Parish of Apokon.

“This tradition must be revived and be handed down to the younger generations in the spirit of living up and strengthening our faith as we honor the immaculate and unconditional love of Mary being the Mother of the Crucified Christ,” Msgr. Perandos said.

Earlier, on May 24, 2013, a children’s choir competition dubbed as Harana Para Kay Birhen Maria was held at the Christ the King Cathedral to bring songs and hymns of praise for Virgin Mary.  It was participated by five entries coming from various GKKs.  (Mart D. Sambalud/davaotoday.com)