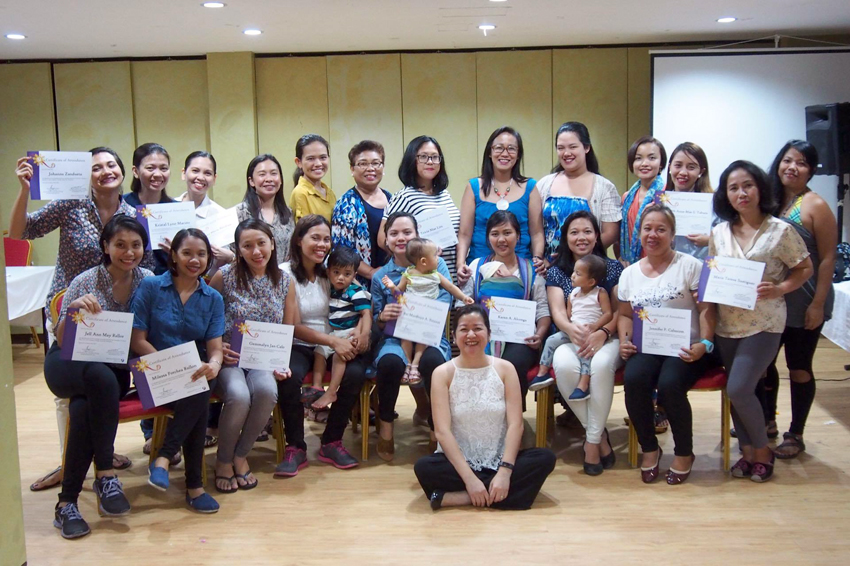 BREASTFEEDING ADVOCACY. Mothers from different areas in Davao region join the Breastfeeding Peer Counselors Training organized by the Breastfeeding Pinays from May 20 to May 21, 2017 at the Bahay ni Tuding, San Pedro Street in Davao City. Joining them in a posterity photo are (standing row from L-R) Lactation massage expert Rechilda Talle (6th), Velvet Escario Roxas, program director and founding administrator of BFP (8th), Noelle Polack, BFP administrator and organizer of the Davao-leg training (10th) and seated on the floor is Atty. Abie Co Floreza, president of the BFP. (Photo by Breastfeeding Pinays)

Mejia said that she believes in the power of breastfeeding and that it is the best to take care of children. She came from Mati but she traveled all the way to Davao City to attend a training that promotes breastfeeding as her advocacy.

“This advocacy is very effective and I can totally relate to it. I really learn from the counselors. I hope to help others as well,” Mejia said.

Mejia was among the participants during the first Breastfeeding Peer Counselors Training organized by the Breastfeeding Pinays held last May 20 to May 21 at the Bahay ni Tuding in San Pedro Street here.

Noelle Angelica Polack, one of the administrators of Breastfeeding Pinays and a HypnoBirthing practitioner said the purpose of the training is to give mothers a starter so that they will be able to support other mothers on breastfeeding.

Polack said their objective is to increase breastfeeding rates in the country and “breastfeeding ensures that the babies are alive and well.”

“There’s a gap. In hospitals, they are trying to encourage mothers to breastfeed but mothers don’t really receive a lot of practical support especially during first few weeks after birth,” she told Davao Today during the first day of the training on Saturday, May 20.

Polack pointed that this is one of the reasons why there is low breastfeeding rate in the Philippines.

“It’s improving but we can do so much better and this is a developing country and breastfeeding really is the most secure food source for babies,” Polack said.

A recent nationwide survey shows that only 34 percent of Filipino infants younger than six months are exclusively breastfed and an alarming 36 percent were fed in infant formula, according to a World Health Organization report that assessed breastfeeding in the country.

With this, Polack urged that there is a need to empower mothers that they themselves help to fill-in the gaps from lack of information support and emotional support.

“This is one way of teaching mothers how to provide compassionate care because sometimes, we have all the information but if we are not able to connect on a personal level with the moms, somehow it may not be effective,” Polack said.

“Realistically speaking, we can’t expect that from the medical facility. Since the doctors are busy, the nurses are busy, you’re not the only patient, who’s going to sit with the mom and understand what she’s going through?” she said.

Polack said one of their frustrations falls on the violation of the “Milk Code”.

Polack said that in many cases, they still see babies without medical indications, not given to their mothers until several hours later and that sometimes giving formula to babies without the consent of the parents which are violations of the code.

“It’s frustrating. You’re expecting that the mom and the baby will be protected but somehow they are being put in the situation wherein it makes it more difficult for them to succeed. We hope to reach a good collaboration with health care providers and mother support groups to meet the needs of the babies especially the new born,” Polack said.

According to WHO, “the Philippines was among the first countries to pass national legislation on the International Code of Marketing of Breast-milk Substitutes.”

Former President Corazon Aquino signed into law Executive Order 51, referred to as the Milk Code in 1986.
Breastfeeding Pinays expressed hope that the training will equip the 20 participants to be able to take the challenge, pursue and lead the mothers of Davao for themselves and for the city.

“Davao is growing so health care and care for families should also follow the same pace. You have a higher population so you have higher number of babies. We hope that the movement will start here in Davao so that all families coming to Davao will enjoy the same benefits and health,” she said. (davaotoday.com)