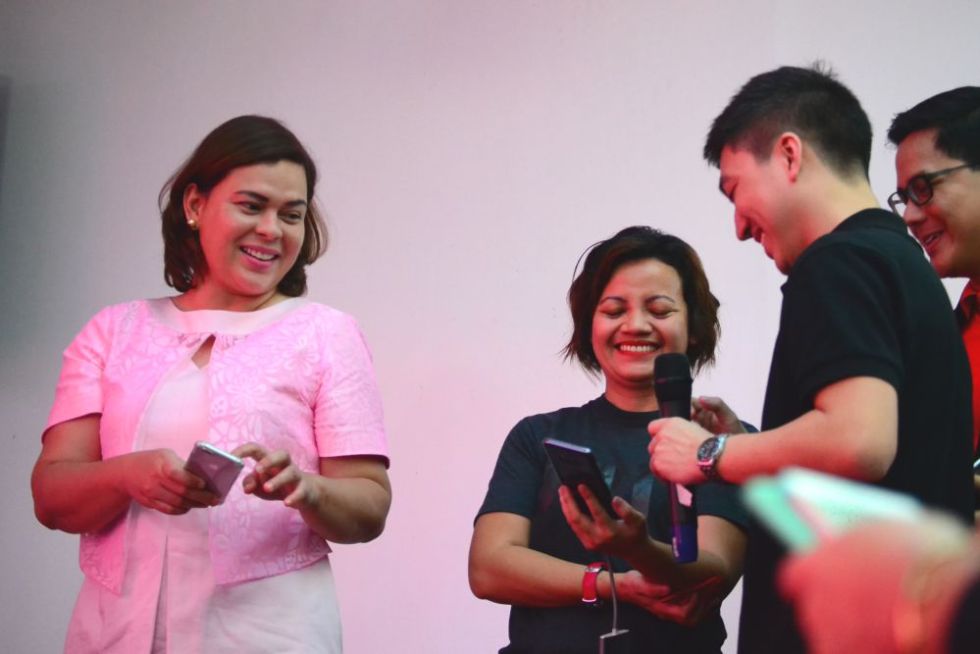 Members of the Avis Philippines, the developer of the Davao’s homegrown new taxi hailing application show City Mayor Sara Duterte-Carpio the procedures on how to use the application during its launching at the Davao City Hall on Tuesday, December 19, 2017.(Robby Joy D. Salveron/ davaotoday.com)

DAVAO CITY, Philippines – The worry among Dabawenyos and tourists over booking or finding a taxi ride home or travel to places away from downtown will soon be over with Davao City’s newly-launched taxi hailing application, ‘HirNa’ which will be fully operational early next year.

In collaboration with app developer Avis Philippines, and network partner Globe Telecom, the initiative of local taxi operators here dubbed as “Hirna” was introduced on Tuesday, December 19 during the media launch held at the Davao City Hall.

In his speech, lawyer Rogelio Largo, president of the Metro Davao Taxi Association, said the application is a response to the challenge posed by City Mayor Sara Duterte-Carpio during her State of the City Address urging them to come up with its own application and upgrade its services.

“We have better drivers and better units but even with that we should admit that there are still a lot of things to be desired and the good mayor was very right in posing the challenge to the taxi sector of Davao,” Largo said.

The app will not only provide commuters a more comfortable method of booking and safer travel but as well as avoid risk of overcharging, refusal to convey passengers and others, Largo added.

“This we can tell you, through this app we’ll try to improve driver behaviour, discipline, and improve the services or taxi units through its feedback mechanism and will be avoiding irregular activities of drivers,” he said.

Francisco Mauricio, president of AVIS Philippines enumerated the following benefits of the application and its edge on the other existing hailing applications:

For lawyer Martin Delgra, chairman of the Land Transportation Franchising and Regulatory Board (LTFRB), the new mobile app “raised the bar” of taxi services in the city.

After the public launching early in 2018, Hirna team eyes to expand its operation nationwide.

Largo said about 1,500 drivers have already signified their interest to register while around 4,5000 taxi drivers are targeted to join next year.