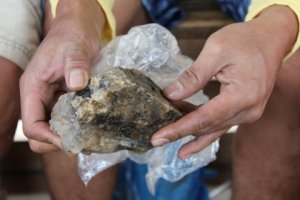 PRECIOUS ROCK. Rocks that contain gold ores such as this are abundant in the mountains of Davao region. (davaotoday.com photo by Medel V. Hernani)

With the number of mining firms under exploration concessions, gold, nickel and copper in the rocky mountains of Davao region continue to be up for grabs.  But government earnings from the excise taxes paid by mining firms are small.

As Mindanao businessmen were quick to criticize the move saying this would hurt business, and Presidential spokesperson issuing a statement to allay these fears, just what is at stake for mining in the Davao region?

With the number of mining firms under exploration concessions, gold, nickel and copper in the mountains of Davao region continue to be up for grabs.  But government earnings from the excise taxes paid by mining firms are small.

Apex Mining, one of only two mining firms in full operation in the region, contributed to government coffers only PHP 18.7 million (USD 0.44 million), in the first half of last year.  The other firm, Holcim cement, was taxed even lesser, at PHP 1.2 million (USD 0.028 million) covering the same period.

Apex Mining has been mining the mountains of Maco town, Compostela Valley since the 1970s.  It first ventured in copper mining but shifted to gold in the mid to late ‘70s when the prices of copper were decreasing while gold prices were soaring.  In 2008, it was registered with the Board of Investments as a new producer of gold, silver bullion and copper concentrates with gold, silver, zinc and lead values on a non-pioneer status.  All of its production is smelted in Switzerland.

Meanwhile, Holcim started in a tiny village of Holderbank, Canton Aargau in Switzerland in 1912.  From the name Holderbank Financiere Glaris Limited, it changed its name to Holcim in 2001.  It operates in more than 70 countries in the world supplying cement, crushed stone, sand and gravel, ready-mix concrete and asphalt.  Its entry in the region more than a decade ago forced the closure of Hi Cement Corporation, Union Cement Corporation and Bacnotan Cement Corporation.

In Davao region, Holcim operates in Ilang village, this city and in Dawan, Davao Oriental.  Its plant is capable of producing more than 1,500,000 bags of cement annually.  Its quarry in Bunawan village is currently producing limestone and it has ship loading facility in its own wharf at Ilang village.

In the research presented by Maita Gomez of Bantay Kita during an International conference on mining held last month, the average share of mining industry to Davao region’s gross domestic regional product from 2001 to 2009 is only 3.97 percent while its average share to the country’s Gross Domestic Product is only 0.91 percent.

Based on the documents furnished by Mines and Geosciences Bureau to davaotoday.com, companies have been granted exploration permit (EP) and Mineral Production Sharing Agreement (MPSA).