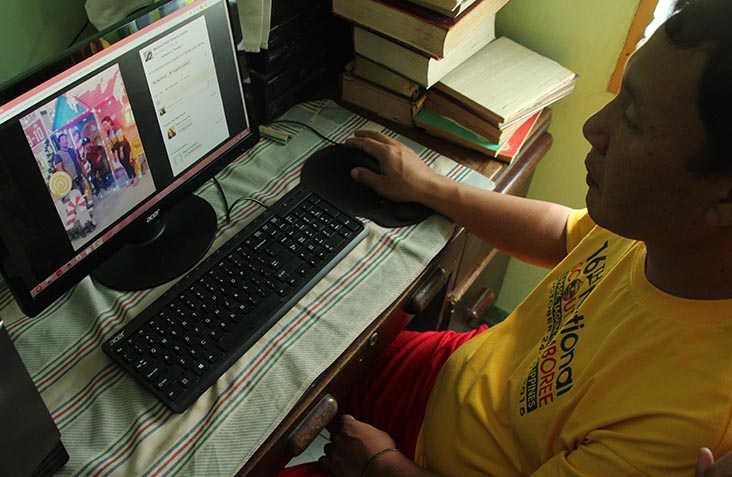 A DIFFERENT CHRISTMAS. Dennis Larida looks at the last complete family photo that he has on Facebook on Saturday, Dec. 24. This will be the first time that he will not be celebrating Christmas eve with his son and his wife, Melanie who both died in the Roxas night market bombing in Davao City on September 2, 2016. (Paulo C. Rizal/davaotoday.com)

DAVAO CITY, Philippines — Christmas eve would have been another busy day for Melanie Larida as she would have doubled her time preparing for Noche Buena and for the 71st birthday of her father-in-law.

Melanie and her 12-year old son, Deniel Josh, were among the victims of the bombing in the Roxas night market here last September 2.

“She would now be  asking my siblings about what food to prepare for Daddy’s birthday like she used to. She’s like that as a daughter-in-law,” said her husband, Dennis Larida, 43 in an interview with Davao Today on Saturday morning.

Christmas this year will not be the same for Dennis as his life took a “360 degree turn,” he said.

Past 10 p.m. on September 2, Dennis said they were already in bed in a small hotel in the city when they decided to get up and go to the Roxas night market.

The market located right across the Ateneo de Davao University offers street foods, used clothes and massages. The area is always brimming with people from all across ages as the market offers affordable finds.

The family enjoyed the ukay-ukay (used clothes) and were about to go back to their place when they decided to get a massage.

“I sat right in front of my son while the two of them get a massage, then there was an explosion,” Dennis recalled.

He said only the three of them remain in their seats while he saw others have fallen from the blast which authorities confirmed was from an improvised explosive device.

“There was chaos and I immediately asked my son how he is. He only told me ‘Pa, di ko kaginhawa’  (Pa, I cannot breathe),” he said.

He performed a resuscitation to his son thinking it would help him get air. He heard her wife asking him to get her bag. He would not hear from her again in the next few minutes.

A stranger helped him relocate his family across the street. They rode a police mobile going to the hospital where doctors tried to revive them.

His son, was the first on the list of victims who were brought at the Southern Philippines Medical Center.

Since his wife died, Dennis said he has learned how to clean the house, wash the dishes, put on the curtains, and other chores his wife used to do.

“I am too dependent on her in managing the house. I don’t know where the things are,” he said.

Dennis also learned to go outside and spend more time with his friends and families to help him recover from his grief.

But amidst his loss, Dennis said he didn’t lose hope. He is now more active in church services, going to other places to give testimonies.

“I gave them a message of hope that in spite of what is happening in our lives, we should continue serving God,” he said.

“Let us not allow our suffering and pain hinder us, let us use it as a lesson that we should go on with our lives,” he added.

He also said the public should be “vigilant and do what we can for our communities.”

The blast claimed 15 casualties and injured 69 others. Authorities said they have already identified the primary suspect of the bombing. Police said there are more than 12 individuals who are involved in the incident. Nine suspects have so far been arrested. (davaotoday.com)