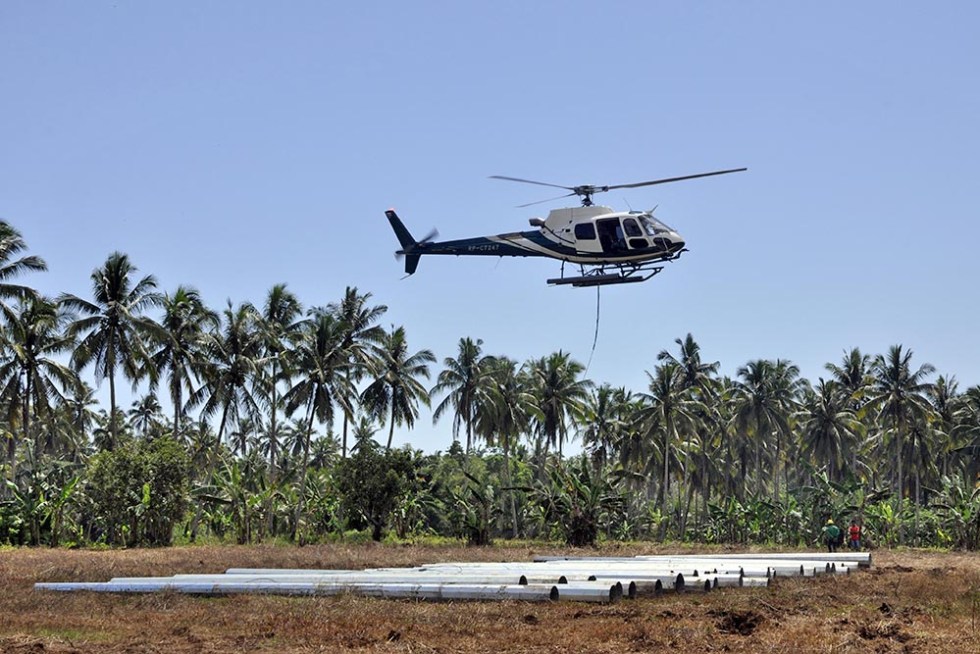 A four-seater helicopter of the National Grid Corporation of the Philippines (NGCP) transports transmission steel poles from its staging area in Barangay La Victoria, Aurora, Zamboanga del Sur to the structure sites in Barangays Usugan and San Jose in the town of Tambulig, Zamboanga del Sur. The transmission company is set to do their rehabilitation works by replacing wooden transmission poles into steel poles that composed of structures number 36 to 57 of the Aurora-Ozamiz 69KV line. (Divina M. Suson/davaotoday.com)

ZAMBOANGA DEL SUR, Philippines – The National Grid Corporation of the Philippines has started ​​yesterday, September 6, its ​repair works on the Aurora-Ozamiz transmission line.

​The NGCP-Mindanao Operations and Maintenance described the work “​sling operations”, or the aerial transport of steel poles from the staging area in Barangay La Victoria, Aurora, Zamboanga del Sur to the structures sites in Usugan, Tambulig, Zamboanga del Sur and San Jose, in the same province.

The structure site is found the existing transmission structures of the NGCP’s Aurora-Ozamiz 69 K​ilo​V​olt​ line which is scheduled to be repaired and rehabilitated in the third week of September. This includes structures number 36 to number 57 located from the town of Usugan to San Jose.

This line serv​es​ consumers ​in ​the towns of Aurora and Calamba, Zamboanga del Norte.

“The purpose here is to facilitate the hauling because the structure area is marsh land and the condition of the terrain is very hard to access. It will take long time to finish the hauling if we will not do aerial transport,” he added.

There are 21 steel posts to be transported in the said area to be replaced to the 21 wooden structures.

NGCP is implementing a program that all wooden poles and light weight towers will be replaced by steel poles and this will be finished by 2020.

Before transporting the poles to the structure sites, it said ​it was not easy to ​locate the staging site​,​ according to Cabanos.

The security situation is also considered in the string operation.

Captain Israel Ranario, the head of the NGCP flight operations, said the security situation in the area is not a problem in this sling operation.

“The sling operation itself is hard but with the help of the ground personnel and linemen our work in the air became easier like the preparation in the ground security, preparation of the steel post and fuel requirements. The weather condition today is also cooperating. The only risk we have is the actual haul,” Ranario said.

For this repair works, the NGCP uses 50 footer-steel poles. (davaotoday.com)