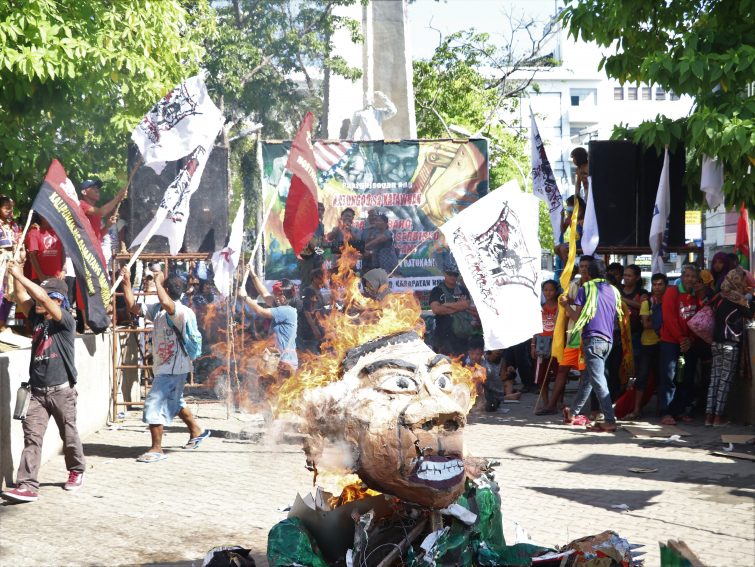 CAGAYAN DE ORO CITY, Philippines – Hundreds of activists took to the streets on Sunday, December 10, to protest the continuing human rights abuses under the Duterte administration in time for the commemoration of the International Human Rights Day.

During the protest action held at Magsaysay Park here, protesters burned an effigy of Duterte and Trump who were depicted as riding a battle tank.

“His bloodshed record is unparalleled. His heartless ‘war against drugs’ had gone extreme, sentencing 13,000 poor and small-time users and innocent lives; leaving the drug lords and big-time drug syndicate – including the Presidential son – to operate freely in broad daylight,” said the human rights group Karapatan in a statement released to the media.

The group said Duterte abandoned many of the promises he made during the election campaign last year including the issue on ending contractual employment (Endo), the cancellation of peace talks, among others.

The protesters have accused the President of pushing for the entry of big mining company, coal-fired power plants and the expansion of mono-crop plantations, the public utility jeepney (PUJ) modernization, “and all other schemes for the benefit of foreign monopoly capitalists and oligarchs.

They also slammed Duterte for holding an “unparalleled fascist record” when he declared martial law in Mindanao without strong basis, on May 23, when state forces fought the extremists in Marawi that displaced more than half a million residents and killing hundreds.

“Properties of displaced civilians were ransacked and looted… and for the countless forms of human rights violations against the M’ranao people, these all constitute ethnocide against them,” Karapatan said.

In its year-end report, Karapatan noted there were around 43 accounted cases of trumped-up charges that victimized leaders and members of legitimate and legal people’s organizations.

The report also showed 467 victims of threat, harassment and intimidation, while 17 individuals were illegally arrested and detained.

State actors such the PNP and AFP, including paramilitary groups, the group said, have “endlessly harassed rural communities and persecuted community people – impeding resistance – to pave way for the entry of foreign and big businesses” which, in effect, drove away more than a thousand lumad (native) inhabitants from all over Bukidnon, Misamis Oriental, and Agusan del Sur from their homes.

“Progressive individuals and activists from the ranks of legal mass organizations operating in broad daylight have been subjected to intimidation, arrest of trump-up charges, if not killed. We have been persecuted for our relentless, just fight for land, jobs, and social services,” Karapatan said.(davaotoday.com)