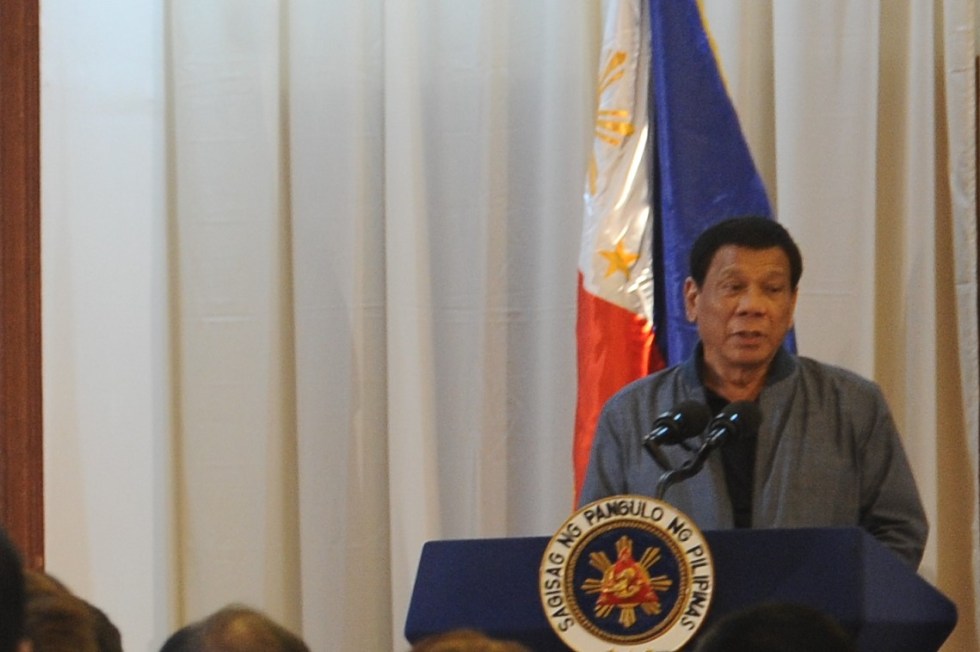 CAGAYAN DE ORO CITY, Philippines – The Duterte administration is keen on pushing the development of Mindanao through the building of at least three major infrastructures that will have an impact on the island’s economy.

Speaking before delegates of the 26th Mindanao Business Conference (MBC), President Rodrigo Duterte announced that key projects such as the Mindanao Railway system, the Panguil Bay Bridge and the expansion of the Laguindingan Airport are in various stages of implementation.

“We have allocated funds to build structures that facilitate the transfer of goods and services as well as enhance mobility and connectivity,” Duterte told MBC participants and public officials during the closing ceremonies of the biggest gathering of investors and business leaders in Mindanao on Saturday, September 9.

He said for so long a time Mindanao has been behind from the rest of the country.

A former mayor of Davao City, Duterte said he has always been a firm believer in its great potential.

“As long as it has the right infrastructure and a sound business environment, Mindanao’s abundant resources and hardworking and dynamic people have the capacity to contribute even more to our country’s growth and development,” he said.

It is for this reason, he said, that the government is aggressively pursuing infrastructure projects in Mindanao under its Build, Build, Build program.

According to the Department of Budget Management (DBM), P643.3 billion was allocated for the infrastructure, from the country’s total budget of P3.767 trillion for 2018.

“The Department of Public Works and Highways (DPWH) receives the second highest share among the agencies, with P643.3 billion,” the DBM on its website said.

It said new roads and highways will be built through an allocation of P19.4 billion, a whopping 185.6 percent increase from the previous budget of P55.4 billion.

“This will allow the transport of more people and goods in all regions of the country. In addition, the DPWH will also construct new bypasses and diversion roads for an amount of P49.3 billion to connect freight centers and alleviate the daily traffic problem,” the DBM added.

To secure Mindanao’s important role as the country’s food basket, Duterte said the government is actively providing assistance in the production of high-value crops, and the development of agricultural products and marketing of its goods, among others.

He said the Color-Coded Agri-Fishery Map is also now available to farmers to help them identify the most suitable crops for their farms.

“This will be continuously improved with new data and tools to provide more information for our farmers and fisherfolk. All you have to do is just look at the map… it’s simply stated as the soil analysis of what should be the appropriate [crops that you’ll plant],” he said.

The President has also made it clear that these goals for Mindanao could not be achieved if there is no peace in the island.

The conflict in Marawi has already displaced hundreds of thousands of residents, killed more than a hundred people, and caused the destruction of millions of pesos worth of properties.

“However, our efforts to promote business, trade and investment in Mindanao will be in vain if we cannot ensure stability and order, as well as secure just and lasting peace in the island,” he said.

That is why, he said, the government is intensifying the fight against illegal drugs, crime and corruption, even as it creates a more enabling and nurturing business environment in Mindanao.

“I assure all investors and businesses in Mindanao that the government will do everything to make sure that Marawi City recovers and that it will rise again as a thriving and flourishing city.”

He said the government is now expediting preparatory works for the implementation of the Marawi City Rehabilitation and Reconstruction Plan. (davaotoday.com)