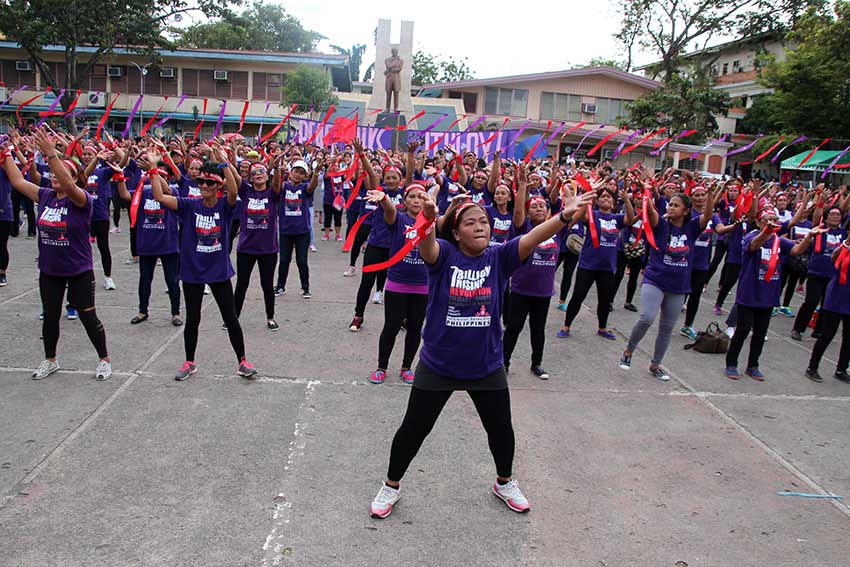 ‘RISING FOR REVOLUTION’. Gabriela Women’s Party estimates at least 1,000 women, advocates, and supporters join the culmination of the One Billion Rising Revolution event in Davao City on Tuesday, Feb. 14. On its fifth year, the OBR in the Philippines is themed as “Rise for Just and Lasting Peace.” (Paulo C. Rizal/davaotoday.com)

DAVAO CITY, Philippines—Women from various sectors gathered in the Rizal Park, this city on Tuesday afternoon for the annual women rights campaign “One Billion Rising” coinciding the observance of Valentine’s Day celebration.

With the theme: “Rising and Struggle for Just and Lasting Peace,” women’s rights advocates danced as a form of protest to end the “social and economic violence against women” and to urge President Rodrigo Duterte to resume the peace talks with the Communists.

An estimate of 1,000 women from different villages and institutions attended the Tuesday’s activity as part of the global One Billion Rising Movement.

Speaking before a crowd of more than a thousand during Tuesday’s OBR program, Councilor Leah Librado-Yap encouraged the public to join the campaign.

“The crusade at the moment will stage a dance mob as the OBR this year launches a strong call for peace,” she said.

“In the midst of a seemingly horrifying all-out war and heavy military operations, like what we hear in Compostela Valley and Davao Oriental provinces, women and their children are the most vulnerable victims,” she said.

She said that people in the affected communities urged the government to stop the military operations and go back in the negotiating table.

“This all-out war is not only a waste of our taxes; this war more than ever, destroys communities and live,” she said.

Librado pointed out that the peace talk must also address the root cause of the armed conflict in the country.

“Let us all hope for a better turn of events and join hundreds of others this afternoon in calling for justice and peace,” she said.

Duterte suspended the peace talks with the communists, saying the talks would remain suspended unless there is a “compelling reason that will benefit the interest of the nation.”

For her part, Gabriela National Chairperson Luzviminda Ilagan who joined the third round of talks in Rome, Italy as a consultant for the government said the “compelling reason” lies in addressing the roots of the armed struggle.

“What is this compelling reason? This [can be found] in our calls as women. An end to violence and poverty. Land [for the landless], job security, and right to self-determination and ancestral domain for the Lumad: these are our calls,” Ilagan said.

Gabriela Southern Mindanao Chairperson Jean Lindo expressed alarm over the military’s all-out war against the communist rebels, saying that civilians would suffer the most in such circumstances.

“Lumad communities in our region suffer from the military’s all out war. We women activists and other human rights defenders are targets of vilification, threat, harassment, and trumped-up charges. Some have fallen victims of extrajudicial killings,” she said.  (davaotoday.com)