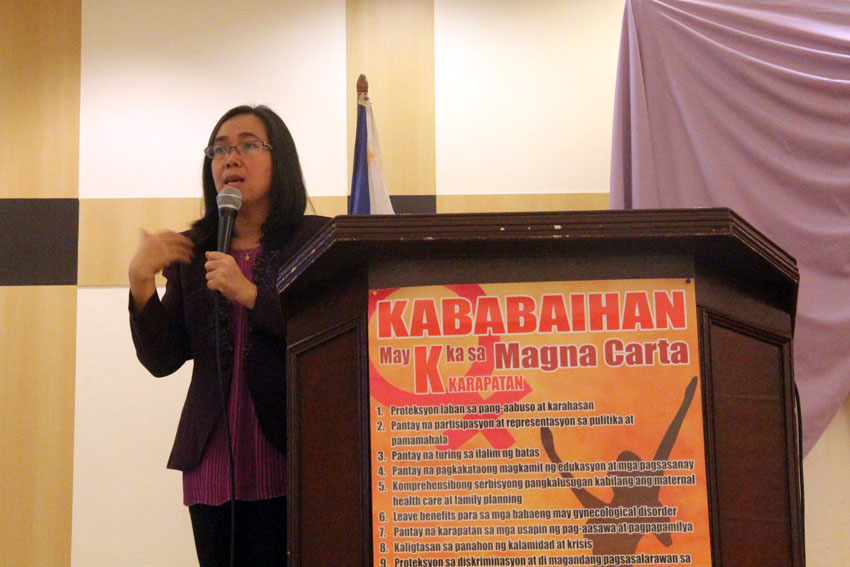 Integrated Gender and Development Division officer in charge Lorna Mandin discusses the challenges and gains on the gender and development advocacy of the IGDD during the 18th Women Summit held in Davao City on Friday, March 3, 2017. (Zea Io Ming C. Capistrano/davaotoday.com)

DAVAO CITY, Philippines – Despite the decade existence of Women Development Code in the city, women’s rights advocates said it is still not enough to empower and liberate women.

Having the existence of the welfare code, according to Lorna Mandin, action officer of the Integrated Gender Development Division of City Mayor’s Office, is just “one aspect in the liberation of women.”

Mandin said culture is also one of the aspects  that should be looked into in relation to the liberation of women.

“If you will say there are laws and programs but the patriarchal culture is still there, like look at women as objects of pleasure, for commodity to sell products, will the women be liberated by that?” Mandin asked.

“So, even though we have good policy, but the culture is still there that does not treat women well, our advocacy will continue,” Mandin added.

The IGDD is a monitoring and coordinating body under the City Mayor’s Office whose role is only to forward concerns to other departments such as the social welfare, city health, among others.

It also holds various forums and educational discussions to the urban poor communities in the city to educate women on their rights.

Enacted on Sept. 17, 1997, the Women Development Code said it “upholds the rights of women and the belief in their worth and dignity as human beings.”

“Women shall be recognized as full and equal partners of men in development and nation building and men shall share equal with all forms of productive and reproductive activities,” the code said in its declaration of policies and principles.

“We can say that even though there are laws in the local, national, and even international, discrimination towards women is still there,” Mary Ann Sapar, spokesperson of Gabriela-SMR said.

“On the economic aspect, majority of women, four out of 10, are contractual workers. Most women are unemployed,” Sapar said.

Sapar added that more than half of overseas Filipino workers are women and labor migration continues because of the “lack of job availability in the country.”

In line with the 107th commemoration of the International Women’s Day, the IGDD will be holding series of activities on women empowerment.

“We will be holding consultation on the problems and issues about women. And there we will find resolutions, programs, and challenges,” Mandin said.

“When we say women empowerment, we give regular sessions and seminars to our women,” Mandin said.

“So they can tell that they have rights and privileges so this start lobbying at the barangay level.”

Among the services provided by the IGDD a re-interventions, education, and orientation on women’s basic rights, targeting women in different urban and rural communities in the city which is mostly could not afford to join seminars in the city.

“Mostly in the barangay, we hold gender orientation to women. Even women member of the communities are not familiar of their rights,” Mandin said.

“They even consider physical abuse as part of married life,” Mandin added.

Gabriela, on the other hand, said that the level of educated women in their rights were mostly found in institutions but in the community level.

“If you will go to the community and ask them about women development code and how to use it to defend their right, not all knew about it,” Sapar said.

“That is why, the challenge to educate women from the ranks of urban poor remains,” Sapar added.

The IGDD, according to Mandin, is now focusing to Lumad women, who were much more detached to the series of education happening in the city.

“We have focused our attention to Lumad women, for they are far, they have to chance to be educated,” Mandin said.

Target places of IGDD’s intervention to rural areas in the city were at the hinterlands of Paquibato and Marilog districts where Lumad are residing.

“Even though IGDD is just a small office, we can reach these barangays,” Mandin said. “And they’re [Lumad women] very appreciative of this.”

Sapar lauded this move of the IGDD saying, that far flung areas where poorest of poor are found were not aware of the law.

“They [IGDD] did the right thing, to reach out,” Sapar said.

As part of its mandate upon its creation, the IGDD held the annual women summit where different women personalities from the local and national offices gathered to hear issues and problems of the women sector in the city.

A resolution which came up during the pre-summit activities is the strict implementation of GAD or the Gender and Development desk or office, which is stated in the Women Development Code that institutions, academe, government offices are required to have.

The Women Summit washeld at the University of Southeastern Philippines.