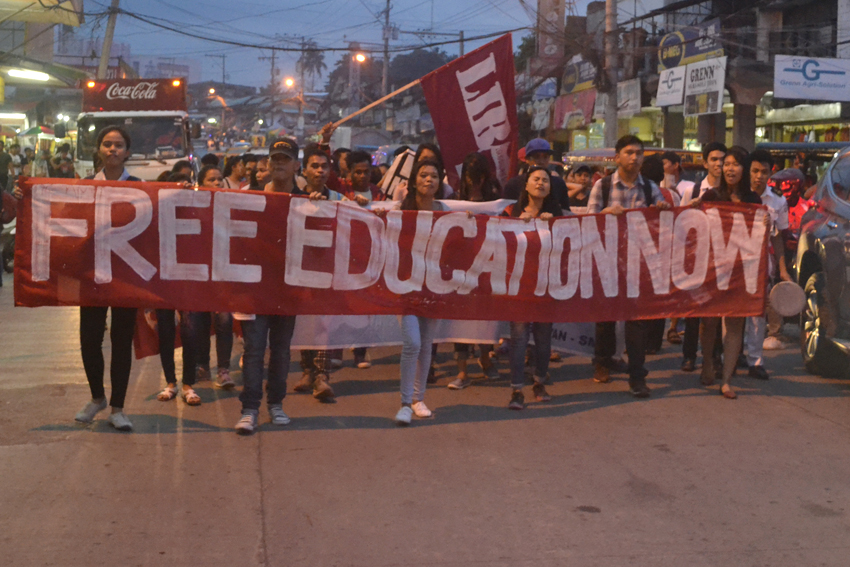 In this photo taken on July 21, 2017, youth groups in the region marched along Magallanes street, two days before the second State of the Nation Address of President Rodrigo Duterte, calling for free education and the stop of attacks against Lumad schools. (Mara S. Genotiva/davaotoday.com)

DAVAO CITY, Philippines – Youth groups are set to march to register their demand for free education this Friday, August 4, a day before the deadline of the signing of the proposed Universal Access to Quality Tertiary Education Act.

Youth group Kabataan Partylist on Thursday denounced the move of the economic managers of the Duterte administration, including Budget Secretary Benjamin Diokno for pushing for the veto of the proposed act.

The proposed measure is supposed to give free education to state colleges and universities starting the second semester of the academic year 2017-2018.

“In the growing instability of the regime and the rotten order, the ruling class is desperate to retain the colonial and commercialized system of education, despite the people’s clamor to make it free and accessible,” Kabataan Party-list Rep. Sarah Elago said in a statement on Thursday.

President Rodrigo Duterte admitted the proposed law is already in Malacañang for his signature and approval.

“It’s on my table. I will decide before the deadline,” Duterte told reporters in an interview on Wednesday during the anniversary of the Bureau of Internal Revenue.

The youth group has vented its ire on Duterte’s economic managers, including Diokno, who are reportedly convincing the President to veto the measure.

Diokno was quoted saying the government cannot afford to provide free tuition for students in state colleges and universities as it will cost around P100 billion annually.

The budget secretary added the measure will only benefit students from upper and middle-class families since only a small portion of the poor are enrolled in SUCs.

“Diokno’s statement merely revealed the twisted state of neoliberal education in the country today – it’s designed for individual development, only to serve the pockets of a few, as well as the market’s needs for cheap and docile labor,” Elago explained.

Kabataan Partylist also urged the Filipino youth and students to march and heighten the fight for a free, nationalist, scientific, and mass-oriented education.

“The US-Duterte regime insists on being ‘business as usual’ on the continued profiteering in education that has been going on for decades. It remains in the hands of the youth and students to assert what is rightfully theirs in the fight for free education,” the group said.

Meanwhile, the group Foundation for Economic Freedom (FEF) also issued a statement supporting the recommendation of Duterte’s economic managers to veto the bill.

“FEF supports a Presidential veto because we believe the proposed Act will cause a substantial amount of taxpayers’ money to be spent on measures that are unlikely to result in the achievement of intended objectives,” the group said on Thursday.
It added that the government can ill afford to waste scarce public resources on the proposed measures, expressing doubt on its effectiveness.

FEF emphasized that the proposed law is arguably anti-poor and inconsistent with the pro-poor orientation of the President’s development agenda. (davaotoday.com)