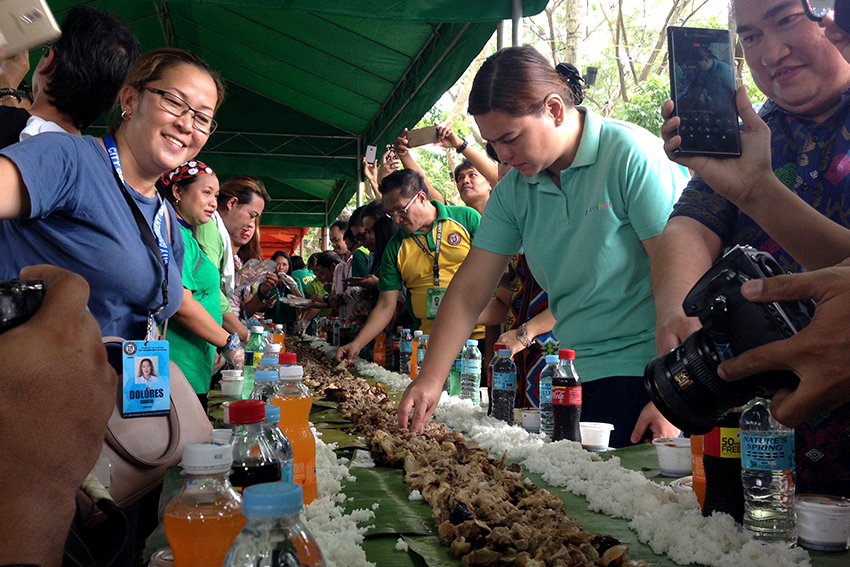 BOODLE FIGHT. Davao City Mayor Sara Duterte-Carpio joins other city officials and employees from the City Environment and Natural Resources Office (CENRO) in a thanksgiving boodle fight at the People’s Park on Wednesday, February 28. The boodle fight was initiated by the City Mayor’s Office to recognize the CENRO employees in their contribution to the success of the recently-concluded Davao Region Athletic Association (DAVRAA) meet 2018. (Robby Joy D. Salveron/davaotoday.com)

This, to give recognition to about 1,200 CENRO employees including the officials, street sweepers, garbage collectors and gardeners who contributed to the success of the recently-concluded Davao Region Athletic Association (DAVRAA) meet 2018, where at least 7,000 delegates from different divisions in the region gathered in the city.

“Thank you very much for your help and your support. If it weren’t for your efforts our activities here in Davao city would not be successful,” Duterte said in vernacular.

“Our activities would not be successful and our visitors and constituents would not be happy here in Davao City if t weren’t for your hard work,” she added.

The event was the first of the series of thanksgiving events aimed to express the city’s gratitude to hardworking men and women of various government agencies that play a big role for the city especially during the conduct of big events. These include traffic enforcers, security personnel from Davao City Police Office and Task Force Davao, and employees of Public Safety and Security Command Center (PSSCC) and 911.

The Mayor also said that aside from the thanksgiving, the event also serves as a venue to remind the employees that another heavy work lies ahead in the month of March in time of the celebration of the Araw ng Dabaw and the hosting of the Iron Man triathlon.

The boodle fight was sponsored by the Pilipinong May Puso Foundation headed by Wen Velasco who was also present during the event. (davaotoday.com)