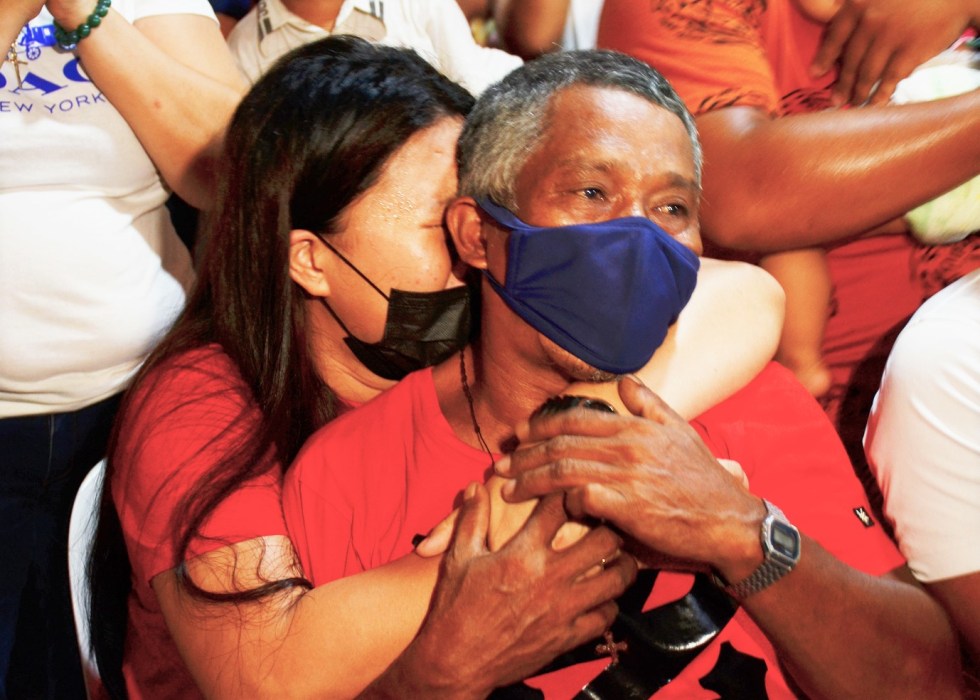 ANTICIPATION. Cagayan de Oro boxer Carlo Paalam’s sister Michelyn Mae hugs his father Pio Reo as they watch the boxer’s final match at the Tokyo Olympics on live television in Barangay Kauswagan, this city, Saturday afternoon. Paalam lost to Great Britain’s Galal Yafai, which means the kid who used to scavenge for a living will be bringing home a silver medal. (Jigger Jerusalem/davaotoday.com)

CAGAYAN DE ORO CITY – After fighting all the way to the Tokyo Olympics finals, local boxer Carlo Paalam will go home with a silver medal after losing to Great Britain’s Galal Yafai at the Kokugikan Arena Saturday afternoon, August 7.

The 23-year-old Paalam’s defeat stopped his bid for a gold medal in the flyweight division, but to his family and loved ones, the boxer who used to scavenge for garbage for a living will always be a winner.

“It doesn’t matter that he ended up with a silver medal. For us, my son will always be a gold medalist. My son, you are the gold in our lives,” Paalam’s father Pio Reo said in vernacular, minutes after the boxer’s fight ended.

The elder Paalam said they were not disappointed with the fight’s outcome since they saw how the boxer gave his best in the ring.

Paalam’s mother’s Jocelyn said she did not watch his final bout at the Olympic, but was thankful that he won the silver medal.

“Even in his young age, he made it this far. Our son has a very bright future in boxing,” she said.

The boxer’s sister Michelyn Mae, said it did not matter what medal Paalam has won.

“What’s important is he was doing okay. He did not sustain any injuries. It was a miracle he was able to make it after days of fighting. What we prayed for was his safety and well-being. The medal is just secondary,” she said.

She added: “We are so proud of him. The whole country is proud of him. He fought opponents with titles and yet he was able to prevail. He is a great fighter. Even if it was his first time in the Olympics, he already won silver. That’s more that we can ask for.”

Aside from the prestige, Michelyn Mae said Paalam’s win would also mean that he would also be able to help him financially as the boxer is still supporting his parents and siblings.

“His promise to us was, ‘I will buy you food and your other needs with whatever winnings I have,’” she added.

Paalam’s girlfriend Stephanie Sepulveda said she was hurt at first of his loss, but assured herself that whatever is the result of the fight, she will always support the boxer.

“Even though he did not win that gold, still, I am grateful to God. A silver is still a big achievement,” she said.