A different kind of graduation 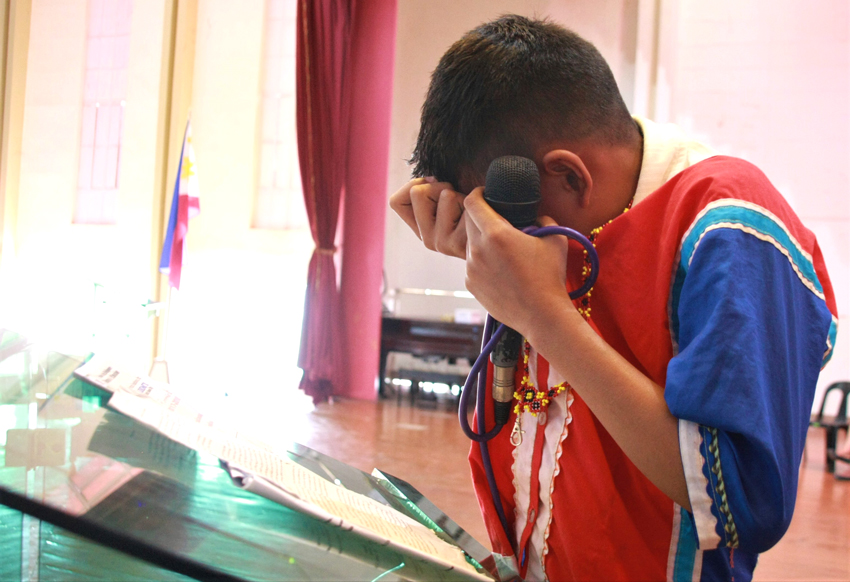 LUMAD STUDENT CRIES. Manobo Jan-jan cries while delivering his valedictory speech as he remembers the hardships they have to endure to graduate, despite their being displaced due to the alleged militarization of their communities. (Kath M. Cortez/davaotoday.com)

DAVAO CITY, Philippines — It was a joyous moment for Lumad schoolchildren — no strangers to fear and terror — who marched like ordinary carefree graduates, upbeat and oozing with pride.

Memories of gunfire and armed men in uniform scouring their community and schools were relegated to the background as 72 graduates of the Mindanao Interfaith Services Foundation Incorporated (MISFI) Academy stationed at the Haran evacuation center here received awards and recognition at the auditorium of the University of Immaculate Concepcion (UIC) Bangkerohan campus.

Ten of them graduated in elementary education while seven completed kindergarten school. The children belonged to the Manobo tribe in Kapalong and Talaingod towns in Davao del Norte. They escaped from their tumultuous communities four years ago and sought refuge at the Protestant compound.

“Ako po ay isang batang nangarap makapag-aral upang magkaroon ng kaalaman at naniniwalang ang edukasyon ay siyang sandata sa kahirapan at pakikipamuhay (I am a child who dreamt of studying to acquire knowledge because I believe that education is a means to fight poverty and to help us live with others harmoniously),” he began his speech in near tears.

(Learning and knowledge, which we could use in our daily lives, are important to us lumads. However, due to unforeseen circumstances, we had no choice but to evacuate. Maybe because we Lumad have a different perspective in life that is why we are being accused and tagged as rebels. They even closed our schools and we forcibly evacuated to protect our life and security. We moved to the city as evacuees but our condition has worsened. Our parents could not work because they are just farmers and are not educated.)

When he recalled how hard it was to study inside the evacuation center, Jan-jan burst into tears.

(But instead of losing hope, we persevered. We strived hard to study even if we didn’t have a classroom, and no decent table, and chairs. Even when we only had a piece of paper, we were contented and happily shared what we have with each other. We endured the heavy rains even if the water leaked from the roof and made the floor we sat on muddy. But this did not prevent us from continuing to study. We had courage and perseverance because of the people who cared and wholeheartedly helped us. They are the people who gave us notebooks, ballpens, and our other needs.)

The Lumad graduates at the Haran evacuation center were among the hundreds of Lumad schoolchildren who have continued their schooling in makeshift classrooms. 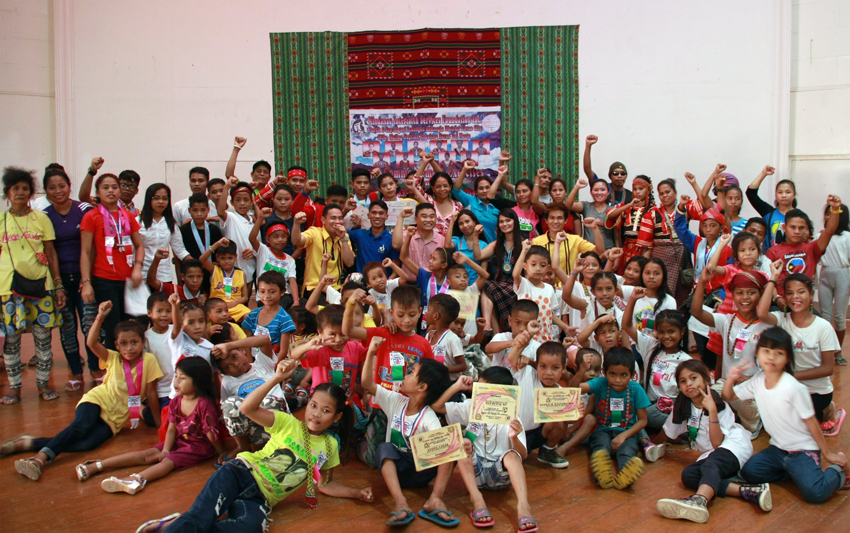 Volunteer teachers and students along with their parents pose for a photo opportunity after the graduation ceremony. (Kath M. Cortez/davaotoday.com)

Child’s rights advocates said that even if there is a Department of Education campaign to respect schools as peace zones, there are over 200 lumad schools in Mindanao suffering from continuing military attacks.

Many Lumad children have reportedly experienced harassment at the hands of Philippine soldiers and its paramilitary recruits.

One these cases was the killing of 19-year-old Lumad named Obello Bay-o who was a Grade 6 student of Salugpongan Ta Tanu Igkanogon Community Learning Center (STTICLC), a tribal school in Talaingod.

Bay-ao was shot dead by militiamen while on his way home from the farm.

Lumad schools under STTICLC and Misfi Academy are facing threats of possible closure due to DepEd’s inaction to their application for permits to operate and for recognition.

Their application has been pending in Regions 10, 11, 12 DepEd offices.

Despite the hardships, Jan-jan told everyone about his dreams–about the dream of every lumad child inside the evacuation center. Even in their young minds, they want to help and educate the Manobo tribe to defend their ancestral lands against the threat of plunder and attacks on their rights.

(I want to be a professional teacher someday for me to be able to share my learnings with my tribe. My classmates want to be doctors, nurses, engineers, accountants or be in other professions. Today we will face a new challenge: to be able to study in high school. I believe that nothing is impossible for children with dreams and perseverance.We will achieve our aspirations because you, my fellow Lumad, are our inspiration. We will strive hard to achieve success and someday we will return to our community; to our ancestral land.)

Concluding his speech, Jan-jan said he was thankful for his volunteer teachers who devoted their time and effort at the evacuation center.

He said that despite the difficulties, his teachers never gave up. (davaotoday.com)