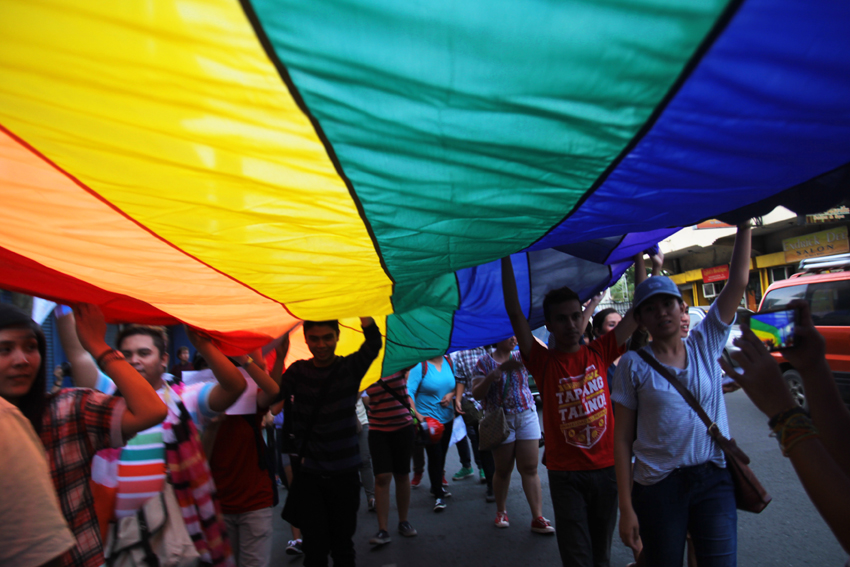 Members of the LGBT community carry a giant rainbow flag as they march against discrimination during the first Pride March in Davao City on Wednesday, June 1. (Ace R. Morandante/davaotoday.com file photo)

School publication Atenews reported that various organizations of the LGBT community and LGBT rights advocates will participate in the event dubbed #AdDUPrideWeek on September 26-30.

To kick-off the event, a talk show dubbed as #LunarAsks will be hosted by Lunar Fayloga on Monday, September 26. Select members from University of the Philippines’ LGBT group, UP Babaylan, are expected to join the event to discuss and talk about the pressing issues faced by the LGBT community.

“We are also encouraged to raise awareness and join the Pride March on Wednesday. Following the march, performances from different groups will also be showcased,” Atenews wrote on its Facebook page.

The Pride Week will culminate with a film-viewing activity featuring movies about the LGBT community’s struggle against discrimination.

To promote gender sensitivity, the Ateneo de Davao University has designated all single comfort rooms in the campus as an “all-gender” rooms.

In a memorandum, Ateneo de Davao University President Fr. Joel Tabora, S.J. pointed out the dialogue was meant to “increase understanding and respect for the human needs and sensitivities of all.”

“The dialogue, I pray, shall foster greater insight into and understanding of the LGBT community and the needs of others who interact with it, even as I already initiate certain changes in the management of our physical plant. All single CRs in the Jacinto Campus will now be designated as ‘all gender,’” read a dispositive portion of the memo.

“This is not only because Davao City has special legislation proscribing discrimination against the LGBT community, but moreso because ADDU is itself positively committed to cultural sensitivity, intercultural dialogue and cultural transformation in favor of a society that is more accepting of diversity, including gender diversity, based on a fundamental recognition of the dignity of all,” the Jesuit priest added.(davaotoday.com)