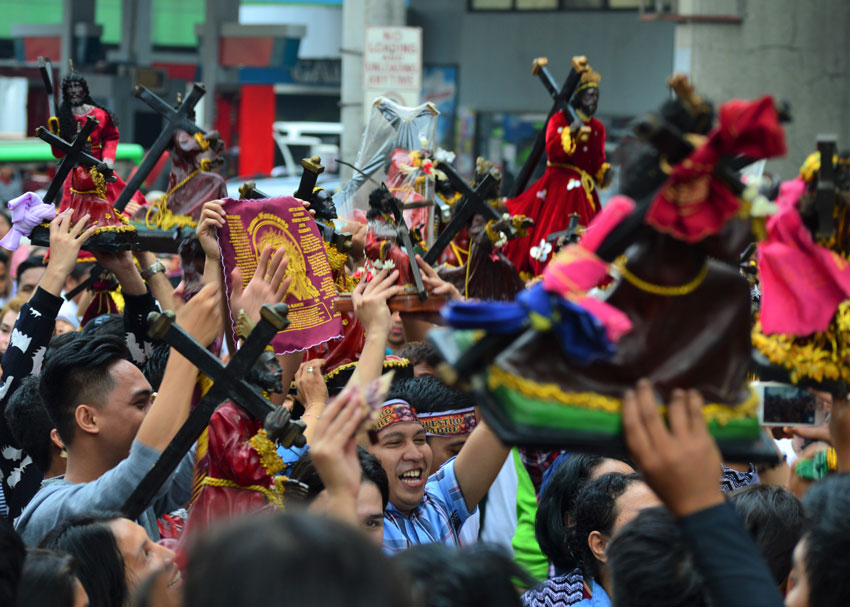 CAGAYAN DE ORO CITY, Philippines — A strong spiritual belief is better than relying on the physical representations of one’s faith, a devotee who credits his health recovery to the Black Nazarene reminded his fellow faithful as they celebrate the religious figure’s feast day Thursday (Jan. 9).

“Your faith is very important. No matter how much you wipe your handkerchief (on the Nazarene), if you lack faith, nothing will happen. Your faith is what will heal you,” said Eduardo Hapson, 62, resident of Barangay San Vicente, Sumilao town in Bukidnon.

Following his stroke in October of 2014, Haspon said he was given 12 days to live and was brought to four different hospitals.

“In those 12 days, I was in a coma for nine days. My chance for survival was very slim,” he said.

On the 10th day, Hapson said, he woke up at four in the morning to a bright light that illuminated his room.

“I saw an old man lying in a bed next to mine. He had dark skin and long hair,” he said.

Hapson also recalled that there were two women who kept watch over the old man and even asked them to gave the other patient fruits.

This was also the day that he was brought to the third hospital in Davao City where he was expected to be operated on.

“I only stayed in Davao for two days. (T)he doctors did not perform an operation on my head because they did not see any sign of aneurysm,” he added.

Upon arriving home, Hapson asked his wife who was the fellow patient he shared a room with, but he was told he was alone.

“It was then I realized that it was a vision and that the Black Nazarene that appeared to me. Since that day, I promised to serve him more as I owed my second chance at life to him,” he added.

Every year, Hapson borrows the Black Nazarene statue and brings it to San Vicente where holy masses, vigil, and “traslacion” were also held.

He said more and more people have become devotees of the Black Nazarene not just in San Vicente but in neighboring villages in Sumilao.

Hapson said he will never get tired of serving the Black Nazarene for as long he lives.

“He extended my life. In return I must serve him and share my faith with others,” he added.

Meanwhile, the Cagayan de Oro City Police Office (Cocpo) reported that the conduct of the vigil at the St. Augustine Metropolitan Cathedral on the eve of the Black Nazarene’s feast day and of the “traslacion” was generally peaceful.

Maj. Evan Viñas, Cocpo spokesperson, said there were no reports of petty crimes, although two persons collapsed during the procession from the cathedral to the Nazareno Church.

“They have medical condition, that’s why they fainted,” he said.

Viñas said more than a thousand police officers, including soldiers, were deployed to secure the route of the traslacion.

The National Telecommunications Commission also implemented a signal jam of all cellphone networks from 4 a.m. to 9 a.m. Thursday.

Both Viñas and Wenceslao Salcedo, a member of the Hijos del Nazareno, estimated the crowd who joined the vigil and traslacion at 250,000. (davaotoday.com)