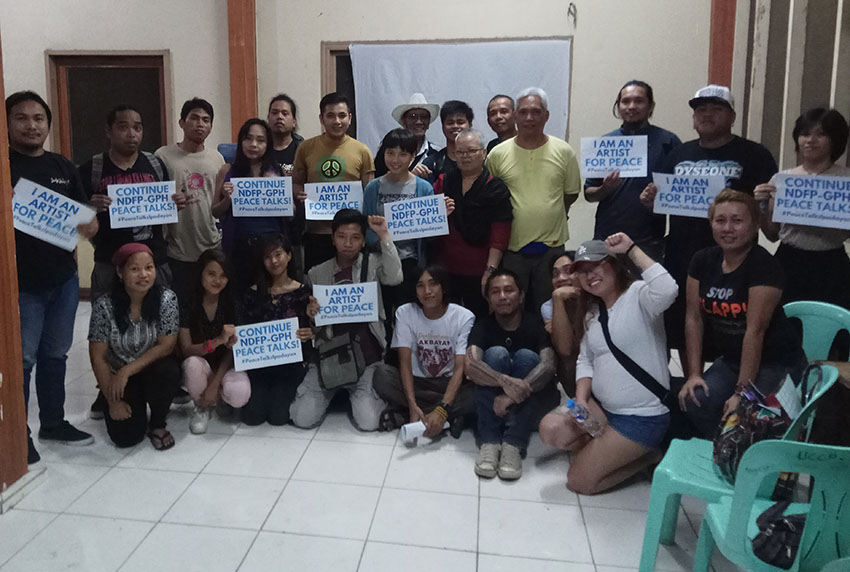 DAVAO ARTISTS FOR PEACE. Local artists gather on Friday, March 3, 2017 at the United Church of Christ in the Philippines Haran compound in Davao City to discuss their plans on how to support the calls for the resumption of peace talks between the government and the National Democratic Front of the Philippines. Leading the initiative is the Artists for Peace-Davao of which they plan to hold concerts and series of mobile art productions around the city. (Earl O. Condeza/davaotoday.com)

“Artists have big role in this [call],” Malou Tiangco, one of the convener of Artists for Peace – Davao said during their gathering held here Friday at the United Church of Christ in the Philippines Haran compound.

The A4P – Davao aims to unify artists in the city and eventually across Mindanao to relay their message to President Rodrigo Duterte.

“Because we believe that the contents in the talk is about our people, our vision is first and foremost to have a free society,” Tiangco said.

Tiangco, a freelance theater artist, has been performing for social causes since Martial Law.

“The fact that I’ve been in the cultural work since the 70s, the advocacies, the issues we carry up to now,” Tiangco said. “It is just the forms we are using, it expanded, more creative.”

She said the role of art should be anchored and related to the call of the times.

“So, it should not be detached or alienated to what is happening and what will happen,” she said adding that artists’ role should vigilant, sensitive, and sensible to the society.

For young artist, Gian Canda, a percussionist of Kaliwanagan Band, artists are part of the citizenry, and should take part on the issues of the society.

“The people have role in the peace talks, and artists are part of it. Of course as a citizen, for it is needed to discuss more on arts and culture,” Canda said.

The artists are planning to stage a concert but they have yet to finalize the venue and other details of the event.

“It will be a small, press conference, introduction for the Davao Artists to be known,” Tiangco said.

“And we hope that we could create productions and discussion on peace to make people understand the issue,” Tiangco added.

Apart from the slated concert, the gathering of artists will also be an opportunity to hold a series of mobile productions which include visual art exhibits, dance performances, music festival and theatre arts which would be brought to communities, schools, and other barangays in the city.

Julius Bangot, one of the conveners and a member of Black Tribe collective, said that they are also conducting gigs to also call for the resume peace talks.

Bangot hopes that more artists will take part of the movement.

“There are a lot of artists in Davao. We are hoping we all will unite and form a community,” he said.

According to him, his participation do not only show his being an artist but also as citizen of the country.

“We need to bring out our humanity, to be part of the change,” he said.

Canda said that film showings will also be part of their plans and actions as to how they will promote their advocacy.

“It is like hopping in schools, where different artists will be part of it, and showcase their artworks,” Canda said. He said they are looking forward for a big “Peace Concert” in the city.

At present, there are 12 recognized groups who are part of the Artist for Peace -Davao which include the independent and freelancer artists.

The alliance is composed of musicians, theatre artists, singers, visual artists who are mostly freelancers, writers, composers, and poets.
​​
Tiangco said after the first gathering, they will be reaching out to different artists in the city and to those neighboring regions in Mindanao.

“This is not exclusive, this is an all-inclusive call to all artists in Davao and even eventually in Mindanao,” she said.

It can be recalled that the peace talks between the GRP and NDFP has been terminated last January by President Rodrigo Duterte following the encounter of state security forces and communist rebels. (davaotoday.com)