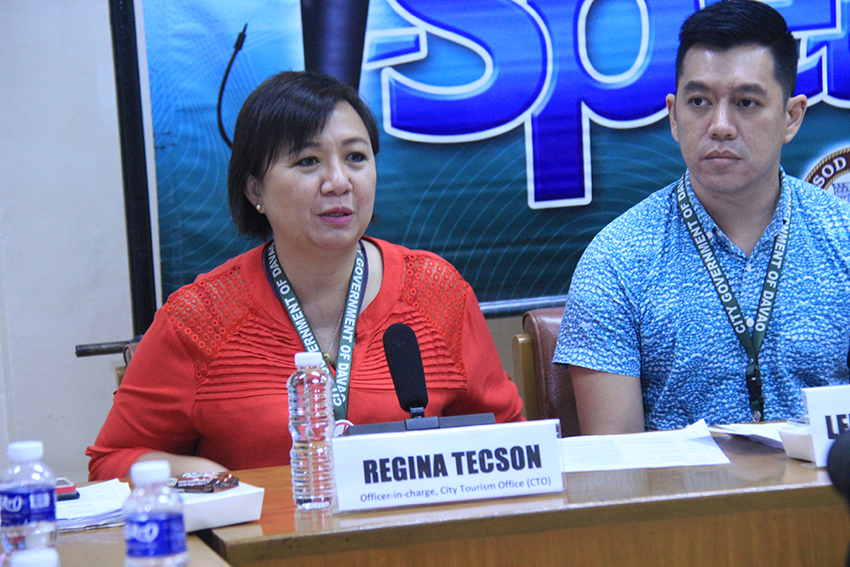 Regina Tecson, officer-in-charge of the City Tourism Office says the city is targeting to reach 1.8 million tourists this year. (Photo by Jason Amisola)

DAVAO CITY, Philippines—The City Tourism Office said Thursday that an estimate of 200,000 visitors will be joining the 80th Araw ng Dabaw celebration in March this year.

Regina Tecson, head of the City Tourism Office, said the celebration will have a variety of activities for the month-long celebration.

She added that the Araw ng Dabaw celebration will officially open on March 1 with a thanksgiving mass at San Pedro Cathedral.

For this year’s celebration, CTO added “Dabawenyo Ako,” an activity that would feature Davao’s history, landmarks, programs, among others.

Tecson said the activity aims also to promote both the sense of pride and values through storytelling, presentations and games.

Apart from these dance competition, Mutya ng Dabaw, Parada Dabawenyo and Duyog Dabaw featuring local artist such as Joey Ayala will also be held as part of the festivities.

“As much as possible we want to instill the Dabawenyo pride to our school kids, we will impart to the students so that the students, themselves will proudly say that they are proud to be a Dabawenyo,” she said.

She expressed confidence that the city could accommodate all the tourists coming from other country’s.  “We still have problems in terms of the influx of our guests and I’m sure we can accommodate them.”

A budget of P10 million has been allocated for the city’s Araw ng Dabaw celebration, according to Tecson.  She said that they are also inviting those companies who are in the private sectors to join the celebration.

“Mayor Sara Duterte-Carpio wanted private sectors to have active participation on the event,” she said.  “We are still trying to fix the budget of the government and if its insufficient, it will be raised by our private partners.”  (davaotoday.com)