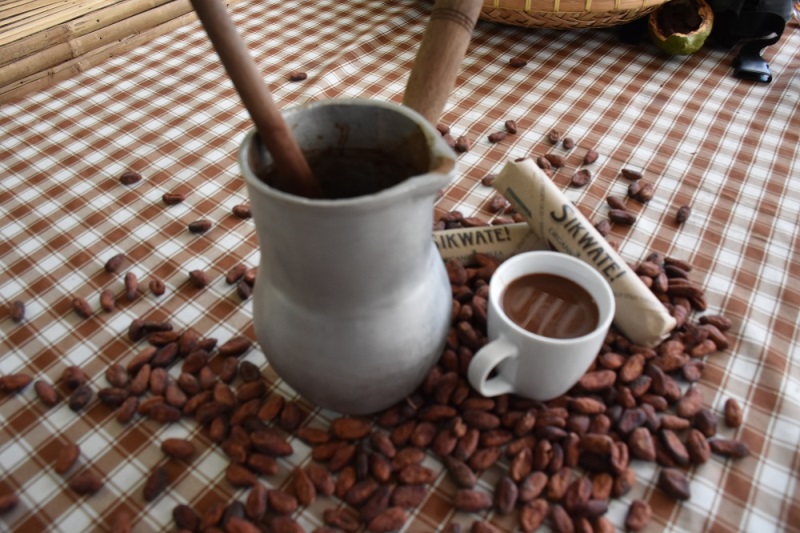 DAVAO DEL NORTE, Philippines – The inviting sweet aroma of ‘sikwate’ or chocolate drink looks deliciously irresistible as it is slowly poured through a ‘batirol’ (a traditional wooden tool to make a chocolate drink), still steaming hot and mouth-watering greeted the visiting PEF team to the cacao processing and development center of Chocolate de San Isidro (CSI). Without doubt, Sikwate speaks for itself, even if one has little background how this local product has been touted to have built the town of San Isidro.

Some members of the visiting team yielded gamely to the invitation to try the ‘batirol’ with their hands before consuming the Sikwate in just a few minutes, to the delight of the team’s host, CSI manager Carlos Barsicula who enthusiastically started talking about the highs and lows of this cooperative.

Derived from a Visayan dialect which means chocolate drink, the SIKWATE comes from tablea, the “home-style pure dark chocolate tablets processed from 100% premium bans, roasted to perfection and packed in traditionally crafted banana paper to preserve its freshness”, CSI promotion reads. The tag “darker is better” promotes the use of chocolate at its purest state.

According to Barsicula, CSI has been making tablea or chocolate tablets since it started in 2009, when they were only able to produce a few kilos of processed cacao tablets with the use of large cooking wares such as those displayed in front of the main CSI building. It was only in 2016 that production of tablea has increased barely a year after the Department of Trade and Industry (DTI) granted CSI the needed equipment that allowed them full mechanization of tablea production. With support from the Peace and Equity Foundation (PEF) in 2017, CSI was able to purchase beans for its tablea and cacao nibs production. CSI is now producing 120 kilos of tablea daily.

Currently, CSI is able to ship 2.5 to 3 tons of tablea monthly to other parts of the country including Manila, Cebu and Davao, Barsicula continued. As one of the biggest producers of cacao beans in Davao Region which is said to be the main player in the country’s cacao production, the municipality of San Isidro is reportedly the biggest contributor with 4,000 hectares of land planted with cacao.

The six (6) member cooperatives of CSI has approximately 600 farmer members who are largely engaged in diversified cacao farming. Thus, during peak season, the shared service facility of CSI could not cater to all their processing needs.

After super typhoon Pablo ravaged vast areas in Region XI and some parts of other Mindanao Regions in 2012, production of cacao slumped after several cacao hills including coconuts and other fruit trees were uprooted by the super storm. “Kalahati ang nasira ng bagyo,” Barsicula summed it up. Small holder farmers have yet to recover from this misfortune despite government intervention and support. 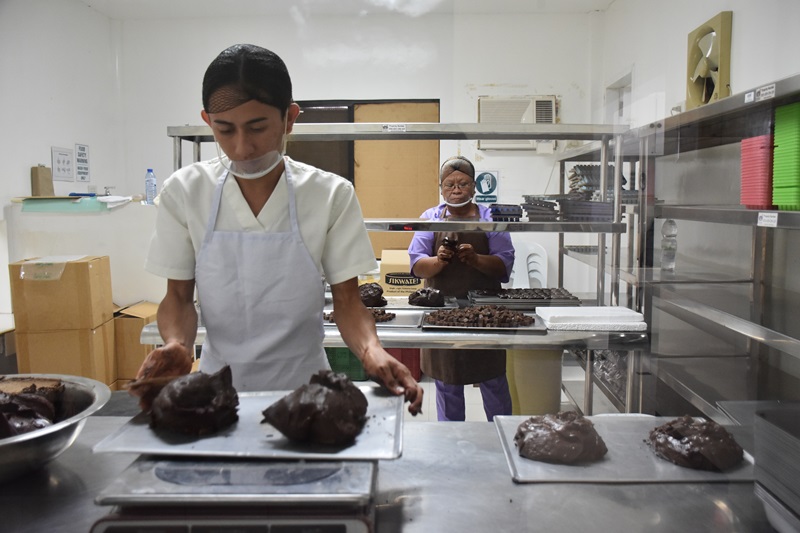 CSI has been giving technical support on farm management, but some farmers still find it hard to adopt to technologies they are not accustomed to. He however credited some of the best practices of CSI in planting the right kinds of seedlings, fertilization, pruning and harvesting that has helped other farmers produce quality beans.

Value adding in tablea production has perked up the operations of CSI since 2016, when volume of cacao tablets and nibs increased with the help of mechanized production. During off seasons, CSI buys beans so there is no lull in production and they can produce every month, from April up to September.

CSI hopes to open a Chocolate House in the future that would teach visitors how “Sikwate” is made in a fun and educational way.

“The tour will illustrate the steps in manufacturing, from growing and harvesting cacao beans, to producing table and cacao nibs. We can also include a café and a gift shop. This will not only help our farmer members, but also position San Isidro as the “Chocolate Hub” of Davao del Norte”. (davaotoday.com)