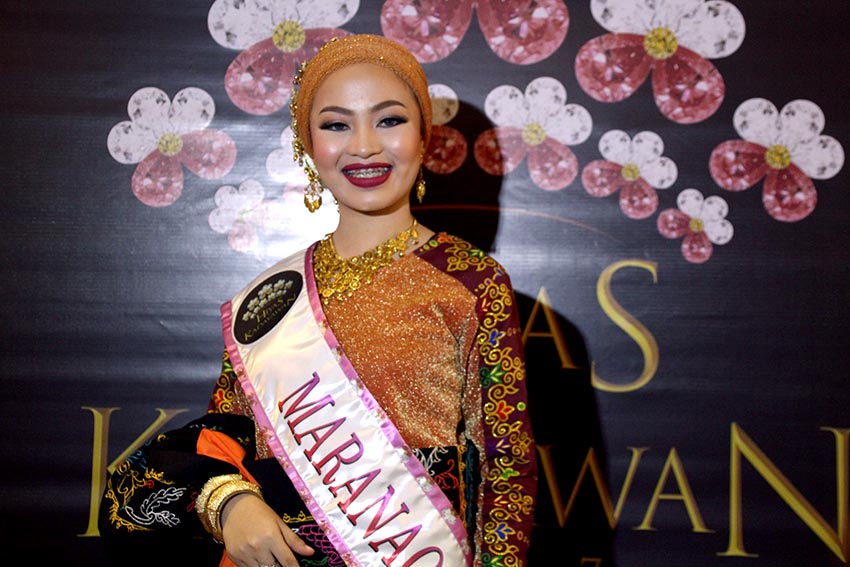 REPRESENTING THE MARANAOS. Sittie Haya Lanto Cairoden, who represents the Maranaos in this year’s Hiyas ng Kadayawan, says she hopes to project a positive image of her people affected by the ongoing crisis in Marawi City. Cairoden will compete with 10 other Hiyas candidates on August 18, 6pm at the University of Southeastern Philippines gymnasium in Obrero, Davao City campus. (Paulo C. Rizal/davaotoday.com)

DAVAO CITY, Philippines – Moro candidates of the upcoming Hiyas sa Kadayawan 2017 expressed their sentiments on different issues, from the war against terrorism and discrimination against them.

In a media presentation on Thursday, Aug. 10 held at the STAR Hotel here, some Moro delegates took stand on discrimination and violent extremism.

Hiyas candidate from Maranao tribe, Sittie Haya Lanto Cairoden, 18, believes joining Hiyas sa Kadayawan is her opportunity to tell the public that Muslims, especially, Maranaos, are not like the extremists.

Cairoden said Maranaos are being “bullied and looked down” by others.

Like Cairoden, Kagan tribe representative, Jerlyn Maminto Mancia, 19, stressed that the Moro people are commonly judged and linked as terrorists.

“The Moro tribe, the Moro people are not terrorists,” Mancia added.

Mancia said the youth tend to be vulnerable when it comes to being influenced by different ideologies presented to them, that is why the family and the community’s role as influencers of the youth is really important.

Cairoden said the key to attain peace is to “respect each other’s culture.”

Cairoden said her advocacy is centered on “multi-cultural understanding with equal respect to various tribes of Davao City.”

“My advocacy is to promote the maintenance of cultural diversity to policies which people of various ethnic and religious groups are addressed by authority as defined by the group to which they belong,” she added.

The Hiyas ng Kadayawan will be held on August 18 at the University of Southeastern Philippines gymnasium in Obrero.(davaotoday.com)