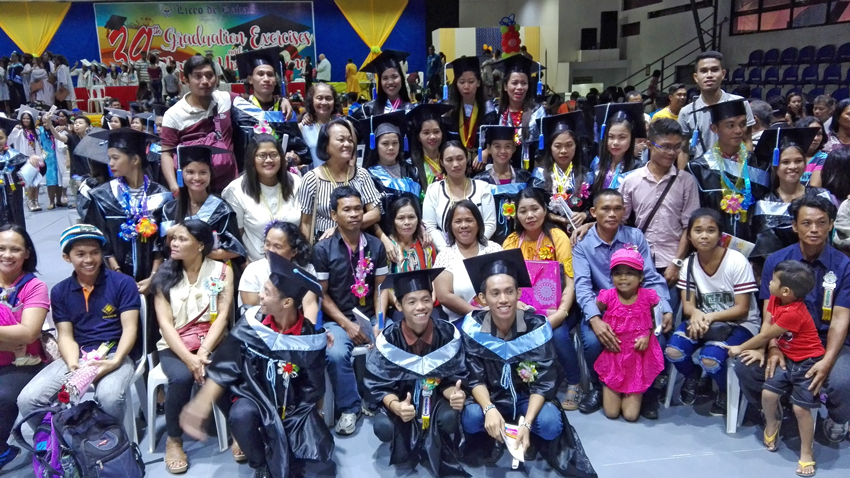 SCHOLARS. The 23 Lumad scholars of the Mindanao Interfaith Services Foundation Incorporated (MISFI) pose with their teachers and parents during the 29th commencement ceremony of the Liceo de Davao College in Tagum City on March 26, 2018. (Kath M. Cortez/davaotoday.com)

“I am so thankful that I finished college. I am so grateful for all those who supported our education,” said Carlos Trangia, Jr., who dedicated his diploma to his father, environmental activist Barug Katungod spokesperson Carlos Trangia, Sr.

The Trangias were victims of Super Typhoon Pablo (international codename Bopha) in December 2012 which ravaged their farms and other areas in Compostela Valley and Davao Oriental. They along with 5,000 others later trooped to the streets and barricaded the Montevista national highway to condemn the slow-paced distribution of relief packs and government assistance in the Bopha-affected areas in Davao region.

The struggle taught him to pursue college studies and to become a teacher for Lumad communities.

He later applied in 2014 for a scholarship at MISFI, which sponsored free tuition and boarding for Lumad children interested in taking up a course for a bachelors degree in teacher education.

Rennel Maglasang, the batch’s Leadership Excellence awardee, said he is committed to serve the community after graduation.

Having finished Bachelor in Secondary Education, Major in Mathematics, Maglasang said giving back service to the community is a must for someone like him who was given the chance to study for free.

He grew up in Mabini town, Compostela Valley, where his family experienced harassment from the military. They were forced to leave their home after they were falsely charged as supporters of the New Peoples Army.

Maglasang said the dislocation affected his family greatly, especially since this gave his father a hard time in looking for a job to support them.

“After I finish college, it is time to serve the people. I want to impart my knowledge as a teacher to many indigenous children who are dreaming big and yet, who do only have limited chances. Many of these children are eager to learn,” Maglasang said.

To become a teacher for Lumad children was also what Jason Alberta is planning after graduation.

Alberta told Davao Today, “Aside from my family, I have a bigger obligation to my community. It is very obvious that there are many Lumad children who can’t go to school, that’s why I am willing to help.”

Alberta, who grew up in a far-flung community in Saranggani Province and a son of a farmer, dreamt of helping children in any way possible.

He said the MISFI scholarship program gave an opportunity for him to widen his perspective to take the alternative career path of giving education to those in need, like the Lumad.

The MISFI scholars interviewed by Davao Today said they will follow a career path less taken up by their classmates and counterparts, who mostly would aspire for a slot in the highly-paying public schools.

For these scholars, giving back to the community is something that is more important. 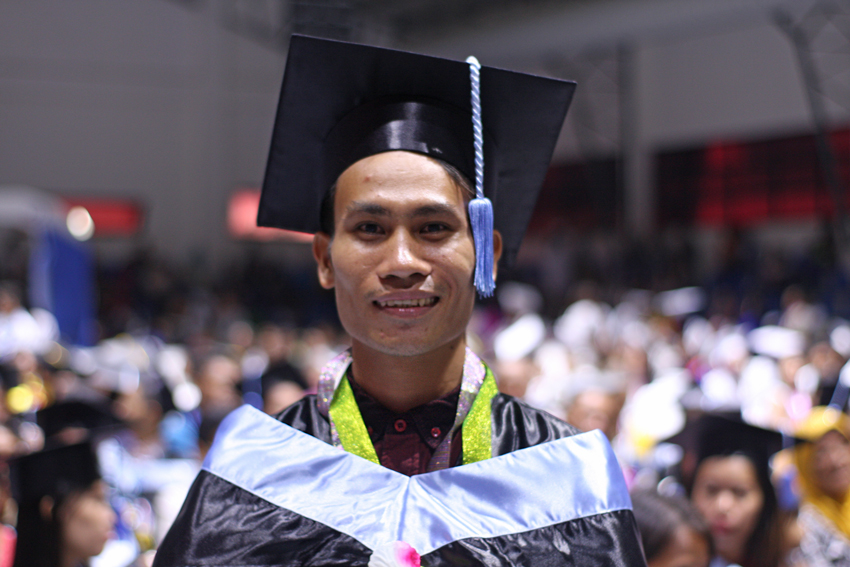 “Alternative learning has always been under attack. It is always labeled as a breeding ground of revolutionary forces, but what’s being revolutionized is the capacity of the Lumad people to read, write and count. If this is the way we help them, then we will do it,” said Alberta.

In an interview, MISFI Executive Director Percenita Sanchez said that the education program of the institution has simple criteria for those who want to pursue a college degree.

Sanchez said that as long as they are Lumad or they come from a Lumad community, and that they are endorsed by the people’s organization, then they can avail of the scholarship program.

“The vision of this program is to send the Lumad children to school and eventually help us in giving education to the indigenous communities in Mindanao,” said Sanchez.

MISFI’s education outfit, the MISFI Academy operates 32 formal schools with alternative curriculum all over Mindanao, offering pre-school, elementary and junior high school education. They currently have more than 1,400 students, mostly Lumad and Moro schoolchildren and youth. They have 87 community educators, mostly professional graduates and some with licenses.

MISFI designed the college education scholarship program to produce its own community educators amid the growing needs of their schools and the clamor to put up additional schools in more communities in the island. (davaotoday.com)