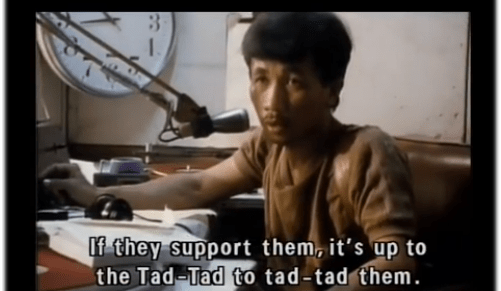 DAVAO CITY, Philippines – He was the voice that evoked fear from the people of Davao City in the 1980s, a voice heard over the radio, calling out “Redemp-terrorist” priests, union activists, and others as communists.

The voice belonged to the late Jun Pala, the infamous radio broadcaster who shot to fame for his daily “Anti-Communist Crusade” program that ran around the clock on the defunct DXOW along V. Mapa Street.

Pala and the Alsa Masa days of Davao City may be forgotten in this generation, but he will appear in this award-winning documentary “Rustling of Leaves: Inside the Philippine Revolution” that will premiere 32 years from its release in the Daang Dokyu online screening in its Martial Law Never Again section commemorating the history of Marcos and Post-EDSA.

The counterpoint comes from Davao City’s Alsa Masa, where paramilitary or vigilantes fueled by Pala’s words would attack activists. Colonel Franco Calida also figures in the film as they patrol Agdao district, which was called “Nicaragdao” where Alsa Masa and NPA sparrow units clashed as villagers are divided between the two groups.

The film also has a chilling account of a labor leader in Mandug hacked to death by the Tadtad (chop-chop) paramilitary as his family and comrades recalled witnessing the horror.

Pala gets to be interviewed by Wild inside his radio booth, where he evoked Goebbels and “God-fearing ideology” to justify his advocacy.

Also making an appearance in the film is a young Senator Ronald ‘Bato’ dela Rosa as a military officer patrolling Santa Cruz, Davao del Sur, where the Tadtad group struck fear among villagers. The said group was captured in a photo carrying a head of an activist.

Later in the film, Dante’s senatorial campaign brings him to Davao City, braving the place that has been called Alsa Masa territory.

The documentary won the People’s Choice Award at the 1989 Berlin International Film Festival, the Prix du Public award on the 50th anniversary of the National Film Board of Canada, the Grand Prize at the Houston Film Festival, and Best Cinematography at the Society of Canadian Cinematographers. The Hollywood Reporter writes that the film “sparkles with deadpan with and shrewd observations”.

Screening a 32-year old documentary is still relevant, says Jewel Maranan, festival director of Daang Dokyu. “It remains very relevant today. It is an important film for people seeking to understand the roots of conflicts in the country and for those concerned about the peace process,” Maranan said.

Pala ran for mayor in 1988 banking on his Alsa Masa machinery but lost. His popularity waned in the 90s, but he won a seat as a city councilor later on. He was assassinated in 2003.

The series will run from September 19 to 21 and will have a repeat from October 9 to 15. (davaotoday.com)