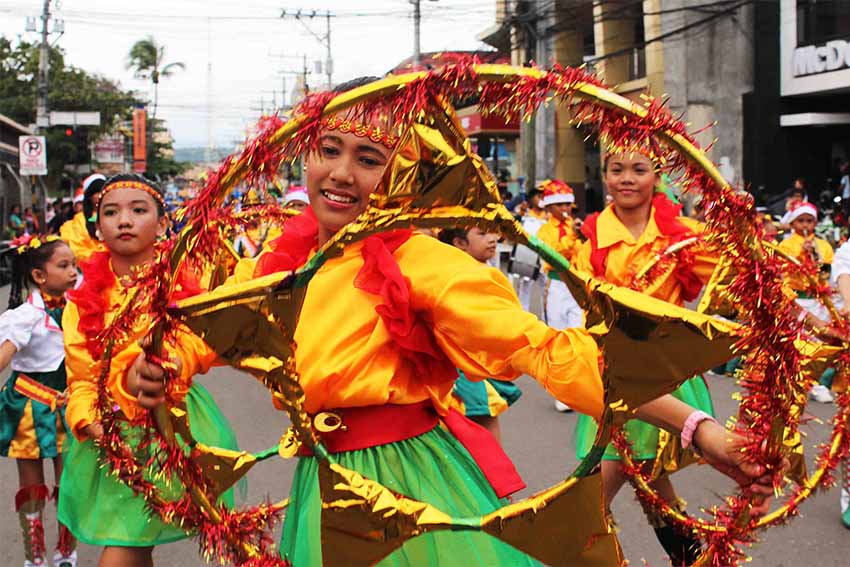 Public school students in colorful costumes are among the participants during the Pasko Fiesta 2015 parade held at the Rizal Park. (Medel V. Hernani/davaotoday.com file photo)pasko

DAVAO CITY, Philippines — The City Tourism Office has announced the line up of activities for this year’s “Pasko Fiesta” celebration which will be launched on Dec. 2 at Rizal Park, this city.

In Thursday’s I-speak  Forum at the  city hall conference room, City Administrator Zuleika Lopez  said this year’s “Pasko Fiesta” will be inclusive to all sectors as per instruction of the city mayor.

“As much as possible the instruction of the Mayor on the upcoming Pasko Fiesta is there should be no sector that will be left behind, so we are trying to involve the children, senior citizen, Lumad and the Lesbian, Gay, Bisexual, and Transgender (LGBT) sector,” she said.

CTO said they are expecting an increase of tourists in the city all throughout the duration of yuletide holidays.

Meanwhile, Regina Rosa Tecson, head of City Tourism Office, has assured the public and the tourists of a joyous Pasko Fiesta celebration.

She added that the mechanics and final schedule of the events will be presented next week. Business establishments were likewise encouraged to put Christmas decorations outside of their respective establishments.

“We will give also prices for those establishments who will join the light up competition,” she said with P150,000 price at stake.

“Big establishments like malls and hotels are not included since every Christmas they put up decorations so we are encouraging the small hotels and other establishment which maybe new players here to light up their establishments,” she noted.  (davaotoday.com)