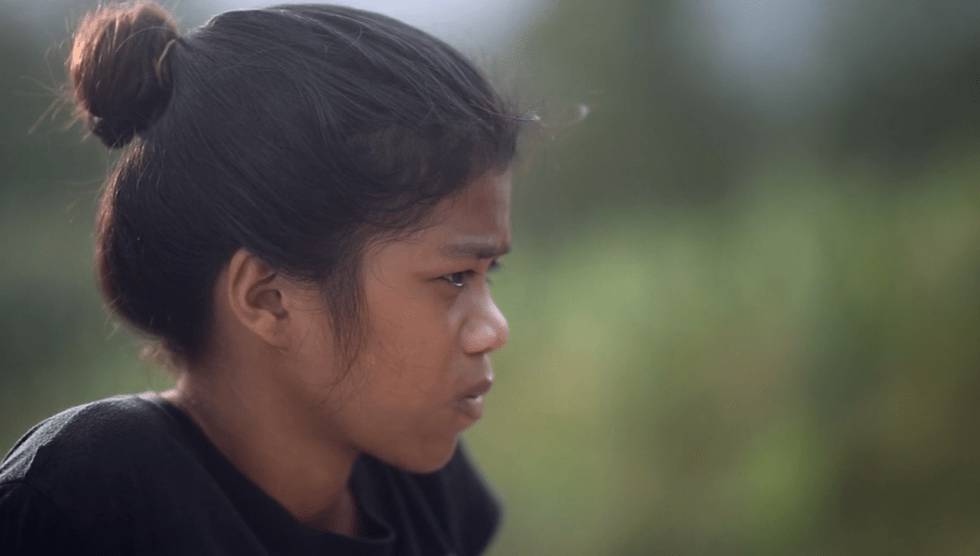 14-year-old Manobo Chricelyn Empong had to flee from her community to escape the intensifying armed conflict in the hinterland and to fight for the right to education of Lumad children in Mindanao like her. (Screenshot from Bullet-Laced Dreams documentary)

DAVAO CITY, Philippines – The struggle of the Lumad children to continue their education amid the tension of militarization and closure of their schools is featured in a documentary premiered in the Daang Dokyu Festival.

Cha Escala and Kristoffer Brugada’s documentary “Bullet-Laced Dreams” follows the story of 14-year-old Chricelyn Empong, a Manobo student who was forced to separate from her family as she and other Lumad children fled their community that was under siege by the paramilitary.

At present, Chricelyn and other schoolmates are kilometers away from their remote villages, seeking sanctuary in Manila where they pursue their studies in a “bakwit” school with the support of Lumad advocates.

“Bullet-Laced Dreams” is in the lineup of films for Daan Dokyu’s “ECOLOGY: Ang Lahat ng Bagay ay Magkaugnay” series that is streamed online in their website from October 2-8.

The 29-minute documentary sheds light on the closure of Lumad schools in Mindanao and the violence against the Lumad communities who are defending their right to education and ancestral lands, which was made more intense during Martial Law in Mindanao.

“Bullet-Laced Dreams” has won the Best Pitch Award at the Colors of Asia Tokyo Docs International Pitching Forum and the If/Then Southeast Asia Prize sponsored by the Tribeca Film Institute and In-Docs in the Docs by the Sea International Documentary Pitching Forum Bali, Indonesia.

In a post-screening interview, the directors said they thought of making the documentary to be part of their advocacy, as they felt the need to tell stories from Mindanao, that for them are not given the right attention, including by the mainstream media.

“I’m saddened with the situation of the Lumad and those who are helping them being tagged as communist rebels that must be killed or their IP schools closed. That’s why it’s important for the Filipinos to watch this and know the real story óf these children, because they were only caught in between the conflict of the military and rebels in their areas,” Escala said.