The curfew was brought back on October 15 to lessen after-work non-essential activities which City Mayor Sara Duterte-Carpio claimed to have contributed to the rise of transmissions, but seemed to have little effect as cases continue to rise.

This was observed by Jon Joaquin, former editor in chief of Mindanao Daily Mirror, who posted a graph in his social media account shows an upward trend of COVID-19 cases. 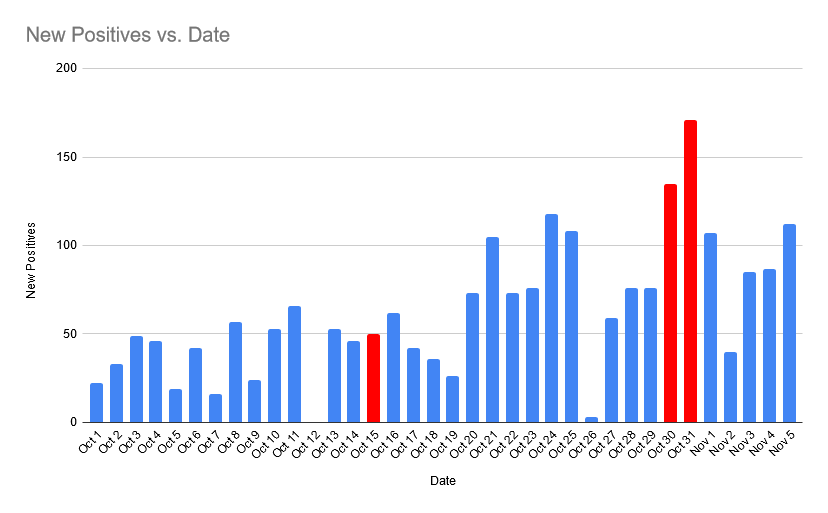 The graph showed that cases were fluctuating after the imposition of the curfew, but new cases surged five days after the curfew as reported by the Department of Health Region 11.

“While the figures fluctuated, the trajectory was undoubtedly upward, culminating in 135 new cases on October 30 — exactly two weeks after the start of the curfew — and 171 on October 31,” Joaquin noted.

The former editor said that the only “changes in collective behavior” in this period was the curfew.

Joaquin said blaming Davaoeños does not give a complete picture.

“I think for the most part the people did their best to obey the executive order. The increase in cases was not because we were “pasaway,” he said.

“Was the 7 p.m. to 5 a.m. curfew even effective? Two weeks after it was re-imposed, we did not see the hoped-for reduction. Cases even surged,” Estuart said in his Facebook post.

The surge in cases has made the city topped the most cases of transmission in the past week.

Estuart suggest the local task force must do more contact tracing to determine where the transmissions occur.

“So, where and when do the local transmissions happen? Who transmits the virus? Homes? Work place? Office hours? Indoor restaurant dining? Gyms? Commute? Parties?” he asked.

The surge has worried Estuart that hospitals and isolation centers are “overwhelmed”. Davao City has now recorded more than 1,200 active cases.

“The Covid facilities in (Southern Philippine Medical Center) are overwhelmed and patients have spilled over to the private hospitals. With the present level of economic activities, we are realizing the uncontrolled surge,” he said.

Estuart is concerned that there might be a possibility that more cases will come in the next few weeks “if no drastic health and socio-economic intervention will be implemented.”

In an interview, Estuart said the city might consider options such as a “time-out” or another lockdown, but he acknowledges this decisions are tough.

“It seems the local government is dichotomizing between opening the economy and saving lives, which shouldn’t be the case,” he said.

He also sees a “risk communication problem” on the part of the city government, as he observes policies, updates and explanations are limited into executive orders, which may be “vague” and generalized.

Estuart suggested the local task force on COVID-19 can open up to different sectors, including the medical community, to come up with more ideas to contain the transmission.

The city government has also re-imposed a liquor ban. A QR code system for contact tracing was supposed to take effect this week but was re-scheduled due to technical difficulties. Davaoeños continue to wait for answers and sound policies to help their plight. (davaotoday.com)