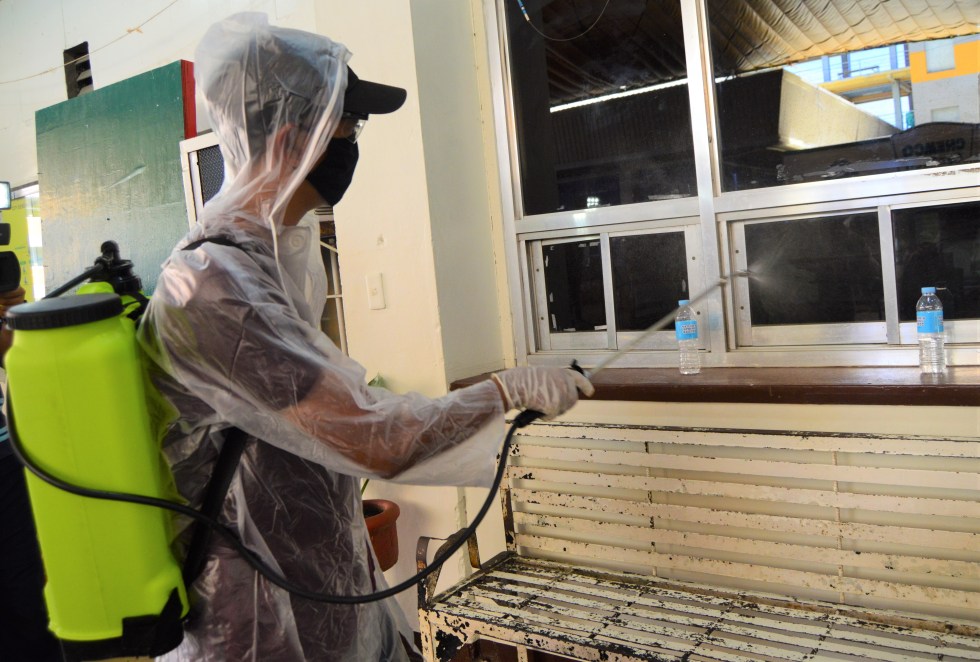 A City Health Office worker conducts sanitation in one of the offices of Cagayan de Oro City Hall Saturday (March 4). This is part of the city’s measures to address the threat of COVID-19. About 50 teams are dispatched by Mayor Oscar Moreno to conduct the sanitation in public markets, bus stations, seaport, airport, schools, and churches in the city. (Jigger J. Jerusalem/davaotoday.com)

DAVAO CITY – Even with the downward trend of COVID-19 cases in Davao City, the Davao City government is anticipating a potential ‘mega surge’ in the city.

New COVID-19 cases in the city has declined in the past weeks with 335 active cases. With 23 new recoveries reported, the total recoveries pushed to 12,733, while three new fatalities raised the death toll to 670.

But as of March 31, the country logged 10,016 cases, the highest nationwide single-daily tally since the start of the pandemic. This has forced the government’s Inter-Agency Task Force to place Metro Manila and nearby provinces back to Enhanced Community Quarantine until April 4.

Dr. Ashley Lopez, head of Davao City Health Office and focal person on COVID-19, said that with the record-high COVID-19 cases in the National Capital Region (NCR) due to the new variants, the surge may come to metropolitan areas just as what happened before.

“With this kind of trend,…because it seems like nisugod sa Manila, nikatag sa NCR, sa mga probinsya tapos karon ni naog na sa Cebu so dili dugay, munaog na gyud na og Mindanao (it started in Manila and spread to NCR, to provinces, and now has spread to Cebu, and no sooner it may come to Mindanao) and as you know, as a metropolitan city in Mindanao we have opened our commercial opportunities and activities,” he said.

“It is possible it may penetrate here particularly the new variant that is the main contributor of the surge in Manila,” he added.

To brace for the mega surge, Lopez said the city government has already made a ‘contingency plan’ which includes preparing for additional isolation and quarantine facilities, staffing, and even encouraging private hospitals to allocate additional COVID-19 beds.

The city has also expanded mandatory testing of contacts up to the second and third level, as well as intensive active case finding and surveillance for influenza-like illnesses such as fever, cough, and colds.

The second batch of COVID-19 vaccines from Sinovac are expected to arrive this month, which will be prioritized for health frontliners. The city has vaccinated around 12,200 health workers on the first batch of the vaccine rollout in March.