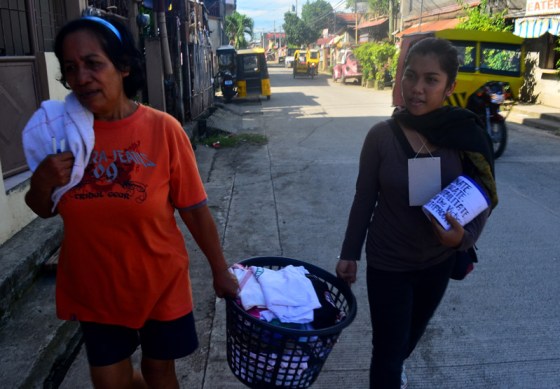 BASKETFULL
A resident of SIR gets a helping hand from AnakBayan leader Mariel Moralde in carrying a basketfull of used clothes she is donating for Yolanda survivors in Leyte and Samar. Youth activists went around communities Wednesday during the International Day of Solidarity for Yolanda Victims. (davaotoday.com photo by Earl O. Condeza)

DAVAO CITY – Young volunteers soliciting donations for typhoon victims found a dismaying trend: The well-heeled and office uniformed residents were difficult to persuade to partake of what they can give than the poor, who showed no qualms at giving at the first instance of soliciting.

The poor though, could only share coins and even used clothings, but the magnanimity and sincerity was overwhelming, volunteers of Tulong Kabataan said.

Tulong Kabataan is a relief network of different youth groups nationwide, and its chapter here conducted house-to-house solicitations in the Slum Improvement Resettlement (SIR) of New Matina, part of the biggest barangay in the city just across downtown at the other side of Bankerohan River.

Aynaderka Sison, spokesperson of Tulong Kabataan in southern Mindanao, said they went around houses and along its streets, approaching everybody, from drivers of pedicabs, owners of sari-sari stores and venders of street foods, to well-off homeowners and office workers.

Loida Colina, who peddles barbeque, or grilled chicken and pork, said her family could just donate small amount of money saying that only last Sunday, her family gave money during a mass in San Pedro Church for the benefit of typhoon victims.

Rosita Carballo, of SIR Phase 1, who was born in Ormoc City in typhoon-devastated Leyte, expressed grief about what happened to her hometown and how she could not donate even a coin.

Her husband died long ago and her family survives only on his husband’s monthly pension of P1,000. She said that “prayers are all I have for them that I could offer”

At the day’s end, they collected 10 sacks of clothes and cash donations of P4,500.

Sison said there were individuals who “did not even bother” about their cause.

Another group of volunteers from  Anakbayan doing solicitation in Matina Aplaya, said it was “heartwarming experience” to see people giving what they have “considering that that the area was also flooded a year ago”, said its spokesperson, Penelope Palma Gil, said.

A volunteer from UP Mindanao, Kurshid Kalabud, shared Sison’s sentiment as he  posted in on his Facebook account.

The Tulong Kabataan affiliate groups participated in a so-called International Day of Solidarity for the Victims of Typhoon Yolanda, declared by the Makabayan coalition of political progressive groups.

Sison said that “this is just a starting participation of the youth, repacking will follow afterwards wherein they will be needing more volunteers”.

A volunteer from University of Mindanao (UM), Hasmine Bantugan said that “even though the sun was scorching, they [people] are ready to help those who are affected by typhoon Pablo”.

“Ang kahago,nawala kay nag kapitbisig ta. Nalipay ko kahit kato lang ang matabang nako (The weariness fade away because we joined hands. I am glad even though it is the only contribution I have),” she said

“Absent ko, even though naa klase karon, first day pa jud (I skipped [my class], even if there is class, it’s our first day). Students, like me, could still cope up our missed classes, unlike the people in leyte, they need more help,” said by another volunteer, Cherry Rose Llana.

Llana, a second-year International Studies student of Mindanao Kokusai Daigaku (MKD) also said that “there is a need to be involved in helping the victims, not just be aware of the situation”.

Solicitations were also conducted in Buhangin, Agdao, and Bankerohan and then converged later at the Freedom Park to centralize all donations. (Earl O. Condeza, davaotoday.com)