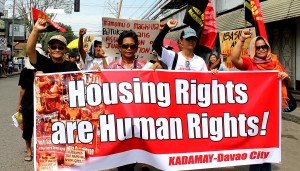 But Davao’s homelessness far from being knocked out.

The year 2011 was not only marked with evictions of urban poor shanties, it also made Davao City Mayor Sara Duterte both scorned and hailed for punching a sheriff. And as the year went to a close, she was awarded as a “defender of the poor,” a misnomer, says an urban poor group.

DAVAO CITY, Philippines — In mid-November 2011, a parade was held for Manny Pacquaio for his third victorious fight over Mexican Juan Manuel Marquez.  The fight secured for the eight-division champ a few more millions of dollars for his bank account but boxing experts and expert wannabes chided the Saranggani congressman for not being able to deliver a decisive knockout win.

Three months earlier, a similar controversial one-sided ‘boxing’ event hogged the headlines, this time between Davao City Mayor Sara Duterte and Abe Andres, a sheriff at the Davao Regional Trial Court.  Last July 1, the first-termer earned the title ‘Father’s daughter’ when she punched Andres four times in the face and back for not having complied with her request to delay for two hours the demolition of an urban poor community in Barangay Soliman in Davao’s Agdao district.  The title stemmed from the fact that immediate past mayor and present vice mayor Rodrigo Duterte, Sara’s father, is well-known for having a quick, violent temper and is widely perceived to be behind the city’s infamous ‘Davao Death Squad’ or DDS.  He flashed a dirty finger at his daughter’s detractors when interviewed about the incident.

And as the year 2011 drew to a close, Malacañang through The Presidential Commission on the Urban Poor awarded Sara Duterte for being a “defender of the poor,” a move that the militant urban poor alliance Kadamay was quick to criticize as “rubbing salt into the wound,” and baseless considering that homelessness has remained unsolved in the city.

No sanction was given to Sara and, after her commendation; it is clear that no punishment is forthcoming.  And she has won a permanent place in the ballots of many Davaoeños.  It is only the city’s urban poor that has lost.

Rallies were held left and right signifying continued support for Sara.  Pro-Sara billboards also cropped up all over the Davao metropolis.  Meanwhile, the Sheriff’s Confederation of the Philippines Inc. filed a direct assault and grave misconduct complaint before the Office of the Ombudsman, even as the court sheriff apologized to the mayor less than a week after he was made her personal punching bag.  Sara also faces more than one disbarment case.  Plus human rights commissioner Etta Rosales called Sara’s action ‘inhumane’.  Interior and Local Government Secretary Jesus Robredo immediately declared that he would send a team of investigators to Davao to assess what happened, saying in a television interview that Sara could be suspended or dismissed from public service.

It was urban poor group Kadamay that put the chaotic turn of events into perspective.  In a statement on the incident, Kadamay criticised sheriff Andres for being so eager to follow orders that would render thousands of people homeless and without livelihood, especially as the city was then still under a declared state of calamity after many parts were devastated by severe floods.  Kadamay also made it clear that Mayor Sara was in no way a hero for attacking Andres, her action merely delaying the demolition of the community and not permanently suspending it.

The mayor herself said in numerous interviews that it was not her intention to stay the Soliman demolition or even to delay it indefinitely.  She said her only request was to give her time to travel to the demolition site so she could help talk to the residents and keep them calm, saying that she was the only person the people in the community would listen to.

Tense demolition, with residents putting up a fight marked this year’s evictions.  Shanties were violently dismantled such as those that occurred in Sto. Rosario, Sasa; Tancontian, Agdao; Barrio Obrero; and in Tigatto, with evicted residents numbering to 5,000 individuals since President Benigno ‘Noynoy’ Aquino assumed power.

In their 2011 end-of-the-year report, Kadamay made special mention of an 11-hectare community in Bugac, Maa.  The report said the contested property was fenced off by the Villa Abrilles without proper permits and proper documentation proving ownership.  The land is occupied by hundreds of individuals, including families that have been residing in the land since the late 40s.

The families have been subjected to threats and harassment by armed guards of the Villa Abrilles.  “Ang among panaghiusa, kaisog ug militansya ang nagpapriso kanila, (Our united action, bravery and militancy have put them to prison)” said Antonina Bariquit, President of Nagkahiusang Kabus sa Purok 13, Bugac, Maa, after 11 security guards of the Villa-Abrilles were jailed for firing at them last September.

The prominent family, longtime allies of the Duterte, has been accused of land grabbing before.  In 2009, the Supreme Court ruled that a land title being brandished by the Villa Abrilles to claim a hectare of land inside the Juna subdivision in Matina was fake.  While the elder Duterte has been careful in not getting directly involved in the land dispute, repeatedly saying that he is leaving the decision on the matter to the courts, he has also not been doing anything to advance the rights of the longtime residents.  He also reprimanded Councilor Karlo Bello, Chairperson of the Council Committee on Civil, Political and Human Rights, after the latter wrote to the Villa Abrilles to ask them to reconnect the water in the community.  Sara Duterte, for her part, said Kadamay never asked for her assistance regarding the Maa controversy.  “Except for their protest actions and pickets at City Hall, urban poor groups never sought my help in the Villa Abrille case,” she reportedly said.

Kadamay has expressed fears that with Davao’s new ‘branding’ to advance the tourism industry, more informal settlers will face demolition.  “The urban poor are considered eyesores and must transfer somewhere else — this, in fact, is the basic premise why the government is implementing demolitions.  In the face of this discrimination, housing associations and urban poor groups have no option but to assert their rights to abode and against all forms of eviction,” said Kadamay Secretary General Sheena Duazo.

It’s not as if the city has no plans or programs to address the urban poor.  City housing and homesite division chief Roy Ryan Rigor reportedly said that the National Housing Authority will construct 100 houses in the 22-hectare city government-owned relocation site in a far-flung Barangay Los Amigos.  The beneficiaries will have to shell out a PhP 300 monthly amortization.  The city also owns seven relocation sites where 5,200 families are presently living.  Under the Urban Land Reform Program, the city also bought a 99.82-hectare land that is now being enjoyed by 6,679 families.

But jobs are foremost in the minds of the urban poor, the same reason why residents in Soliman Agdao where Sara Duterte punched the sheriff, have held on.  And jobs are hardly available in barren areas far from Davao city’s poblacion.  In an urban poor summit held last July, the Alyansa Kontra Demolisyon bid for a housing program that will eventually see them as legitimate owners saying that “(A)ny relocation program that will separate our homes from our sources of livelihood is bound to fail.” (CJ Kuizon/davaotoday.com)