TRAIN Law is a burden, not a gift – critics 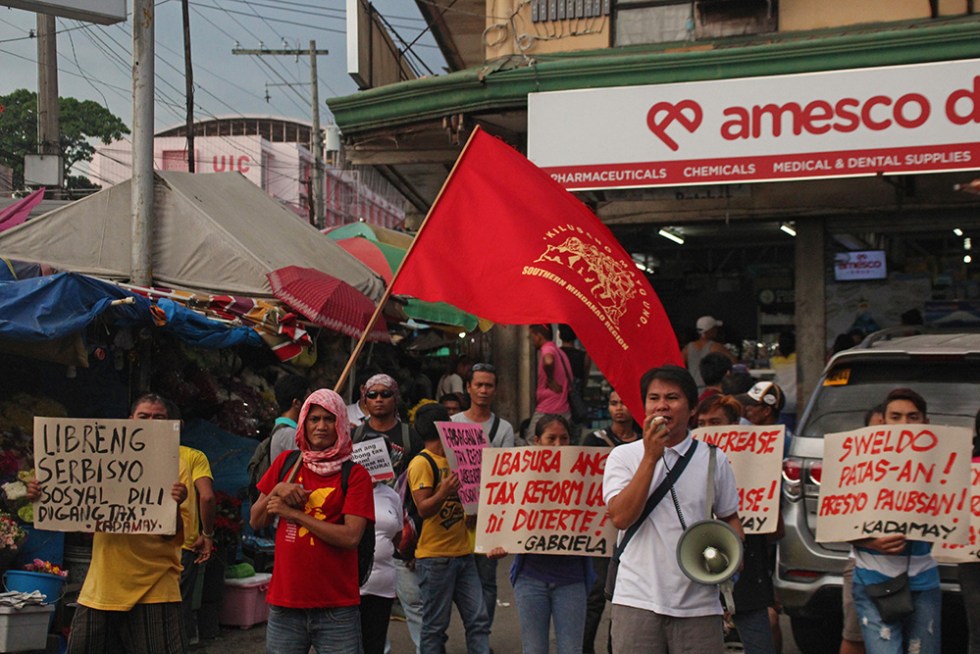 Progressive groups on Wednesday, January 17, protest against the implementation of the Tax Reform for Acceleration and Inclusion (TRAIN) Law in Bankerohan public market in Davao City. The TRAIN Law is expected to reduce the income taxes of employed Filipinos enabling them to receive higher take-home pay. But the law is feared to affect low-income families as increased excise tax on goods pulls up prices of basic commodities. (Kenneth Paul P. Senarillos / davaotoday.com)

DAVAO CITY, Philippines — When President Rodrigo Duterte signed the passage of the Tax Reform for Acceleration and Inclusion (TRAIN) Bill or Republic Act No. 10963 and offered it as a gift to the Filipino people last December​, ​​critics retorted it​ ​was rather an “added burden”.

​Last December 19, ​Duterte claimed that the TRAIN is “the administration’s biggest Christmas gift to the Filipino people,” in his speech at Malacañang Palace where he signed it into law.

Yet, progressive groups here​ ​​criticized the law in their first protest of the year.

“Is this his gift for the Filipinos? These higher prices for daily consumption of food, milk, rice, fish, and oil that greeted us this year?” said May-ann Sapar, ​ secretary general of ​ Gabriela.

Read: Will the TRAIN Law run us over?

The progressive groups​, like Gabriela,​ said it recognized the promise of the law to exempt from the income tax workers earning not more than P250,000 per year, but said higher excise tax “greatly affects the urban poor as felt on a daily basis, and is unfair for the less fortunate”.

“Everybody eats, uses electricity and commutes on a daily basis. The tax reform is not helping but adds burden to the minimum wage workers as prices for these commodities strikes while their salaries stay the same. The poor will become poorer, and more will be,” said Sapar.

“To say that the added tax generated will be for the programs that will benefit the poor is a lie as higher budget allocation is for infrastructures like train railways and coastal roads will only benefit big businesses, foreign investors and only the rich,” said Francis Ruba, ​spokesman of the ​Kadamay​.

​Ruba questioned that if TRAIN is pro-poor, how come the educational system is still “rotting” with thousands of Filipino children not being able to attend to school and “not improving” health care services, which the majority, the masses need the most​”​.

​The progressive groups said discussions on the TRAIN law would be held in the communities and there would be alliances of employees, professionals and small-business owners to be launched.

At present, they ​said they were in the process of gathering and validating their data on the effects of the TRAIN law both on the producers and consumers of commodities to be presented in another protest at Agdao Public Market on February 7.

They ​said they will not stop until the TRAIN law is scrapped.

Meanwhile, the Davao Light and Power Company (DLPC), announced in ​a statement said consumers in its franchise area would expect an increase of three centavos price for every kilowatt-hour (kWh) for the first year of the law’s implementation.

Arturo Milan, the Aboitiz Equity Ventures Advis​e​r for Mindanao said in ​a press conference on Wednesday that the impact is “very negligible” with about​ P60 increase ​in the monthly billing of an average household.

Milan assured consumers not to be alarmed ​saying the DLPC “is more worried over the Philippines being branded as one of the countries with expensive electricity, and will continue to increase as a result of the excise tax”. (davaotoday.com)