21 tons of chicken meat from Luzon held in Misamis Oriental 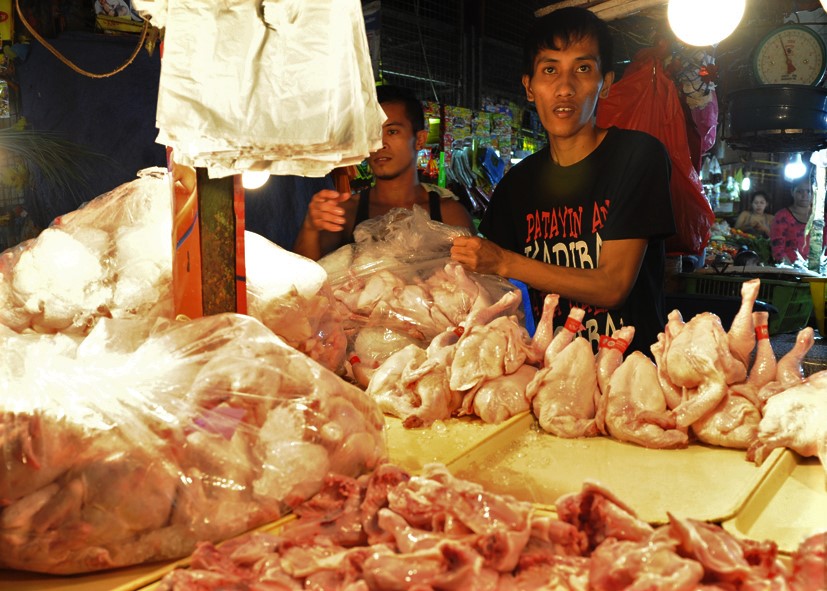 Consumption of chicken meat in Cagayan de Oro City has not been affected by the avian flu scare in Luzon as a vendor continues to sell dressed chicken at the Carmen public market in Barangay Carmen Tuesday, Aug. 15. The agriculture department’s regional office has assured that Northern Mindanao has enough supply of chicken for the local market. (Jigger J. Jerusalem/davaotoday.com)

CAGAYAN DE ORO CITY, Philippines – More than 21 tons of frozen dressed chicken that arrived from Luzon on Tuesday ​are ​​put on hold at the Tagoloan port in Misamis Oriental while the shipment load is being further verified over concern on the contamination of the poultry products in Pampanga.

​The National Meat Inspection Service in Quezon City has affixed its certification on the shipment as safe for human consumption​ before it was loaded for shipment to Misamis Oriental​. ​B​ut ​the region​al office here ​​said it ​is put​ting it​ on hold until further verification.

Aside from keeping the product at a cold storage facility in Barangay Mohon, Tagoloan, Misamis Oriental, the agency i​s ​​​also verifying the authenticity of the documents presented to them, said Dr. Angelita Barcelona, NMIS-10 regional director.

Barcelona added they will conduct further examination by checking the physical condition of the meat.

She said the NMIS-10 is not taking any chances and will reexamine the frozen broiler chicken before they are released to the local market.

The frozen chicken will remain safe for consumption for at least two years if kept in a cold storage, she said.

So far, the tons of dressed chicken were the first to be shipped to Mindanao at the height of the avian flu scare.

“That’s why we will not clear it right away. If the owner will request for meat inspection certification, we will re-inspect it,” Barcelona added.

As of this writing, NMIS-10 has yet to divulge the identity of the product’s owner.

According to Barcelona, the frozen chicken was declared bird flu-free by the NMIS office in Quezon City, clearing it for transport to Mindanao. It was transported on August 8.

The Department of Agriculture’s Bureau of Animal Industry (BAI), in its August 11 memorandum, disallows movement of live domestic and wild birds including poultry meat, day-old chicks, eggs and semen, and even manure, from Luzon to Visayas and Mindanao, and from Pampanga to other parts of Luzon.

“This temporary ban will take effect until such time that no new cases are reported 21 days after the depopulation of the affected areas,” the memorandum said.

The shipment of the frozen chicken, the NMIS-10 regional director said, was in essence exempted from the ban as the clearance to transport it from Bulacan to Tagoloan was dated three days before the DA memorandum was issued.

Barcelona said they have yet to hear of reports of incidence of avian flu in the region but the NMIS-10 has remained on alert for possible cases of the illness that has already killed thousands of birds in poultry farms in some areas in Pampanga.

She said a meat inspector is assigned in all NMIS-accredited poultry processing facilities in Northern Mindanao to check if the chicken heads that are ready for slaughter are safe for human consumption and not afflicted with any disease.

Meanwhile, the DA-10 has assured local consumers in Northern Mindanao that the poultry products sold in the market here are safe and that measures are being taken to ensure that the avian flu virus outbreak in Pampanga will not reach the island.

The agency has also announced that the region has sufficient stock of chicken meat sold in public markets and groceries.

“We have enough supply, so our prices [of chicken meat] remain low,” DA-10 regional director Carlene Collado said in a press conference on Tuesday afternoon.

According to the data provided by DA-10, Northern Mindanao ranked third among the chicken growers in the country, producing a total of 11 percent of 19,596,441 heads contribution to the national inventory annually.

Region 10 is also the eighth top grower of ducks with a total of four percent or 444,064 heads produced annually.(davaotoday.com)