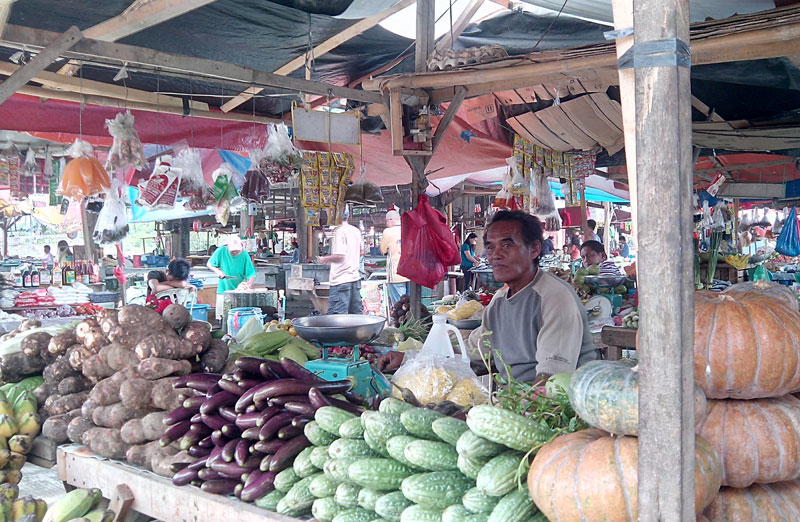 In Compostela town, for example, food produce had been very minimal after the farms were damaged by the typhoon.  Market vendors had to buy their goods in Tagum City, part of the adjacent province which is a two-hour travel by land.

With the additional transportation costs, goods were expectedly sold at much higher prices to the Comvaleños.

“Tag 80 pesos per kilo ang talong sa Tagum, bale 10 pesos matag gramo ang baligya namo [We bought eggplants in Tagum City at PHP 80 per kilo, then we sold it at PHP 10 per gram (or PHP 100 per kilo) in Compostela],” said Abing Bacalso, 65.

Because the locals were still reeling from the typhoon, vendors can’t expect that all, if not most, of their goods will be sold.

“We have no other source of income.  There are those who lend you money but with a very high interest rate.  That would bury us in debt,” Bacalso, who’s sending three children to school, lamented.

Things went a bit better after, he said, after the Department of Agriculture (DA) distributed seeds to farmers.  Many have planted vegetables for their personal consumption.  They then sell their surplus produce at the local market for additional income.

Thus, the local market has been flooded with vegetables.  But for small-scale vendors like Bacalso, this is also a downside.

The economy of the province, before typhoon Pablo, mainly depended on the banana plantations.  However, because of the impact of the natural calamity, many farmworkers were left with little or no job at all.

While at this, he appealed to the local government to repair their town’s wet and dry market because it suffered heavy damage because of Pablo. 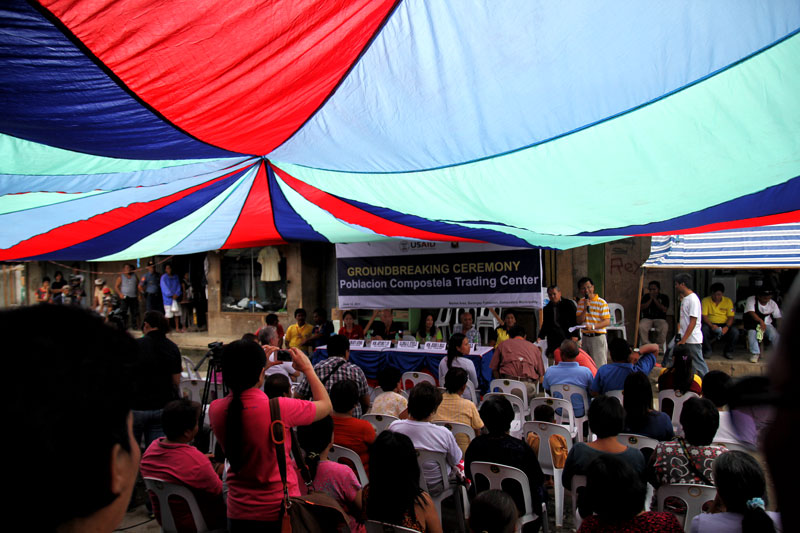 The foreign agency has poured PHP 2.5 Million (USD59,500) “to help restore safe and efficient commerce” in this town.  The structure was designed to withstand extreme weather conditions and is said to benefit 23,000 residents in the said village alone.

While vendors were happy with the project, the fact remains that locals and the entire province need more help.

Many farmers, he said, are eager to plant trees and crops but they ran out of seedlings.

But for Karlos Trangia, peasant-leader of the movement of Pablo victims Barug Katawhan, the farmers “need their own land to till,” first and foremost.

Domie Ginampas, 46, a recipient of the corn seeds and farm inputs of USAID, for example, said that he prepared a quarter of a hectare for a demo farm which he ploughed through an old-fashioned yet dependable way, that is, with a Carabao.

“But I am not the owner of this land.  I am just a tenant,” he lamented.

Trangia also said farmers lack the financial capital to cultivate their lands and to grow the seedlings into crops or trees.

“Farmers have no source for daily sustenance much more for expenses for growing seedlings.  Dili lang man na human og tanom, pasagdan na (You just don’t plant the seeds and then leave them afterwards),” he pointed out.

In March, the province proposed a PHP16 Billion rehabilitation plan, according to a news report.  However, the said amount was trimmed down.

“Kasi napakalaki ng nasubmit natin.  Siyempre, sa tingin naman ng Presidente (Noynoy Aquino), napakalaki ng amount.  Baka hindi mabigyan lahat, so i-validate ilang beses (Because the amount of our proposal was very big.  The government thought it had to go through a series of validation process),” Uy said, adding that the province already came up with a budget “that is realistic.”

However, he failed to give the exact amount, saying he doesn’t have the exact figures, yet.  He said though Malacañang promised to give the budget for the shelter program and other infrastructure projects within the next three months. (John Rizle L. Saligumba/davaotoday.com)