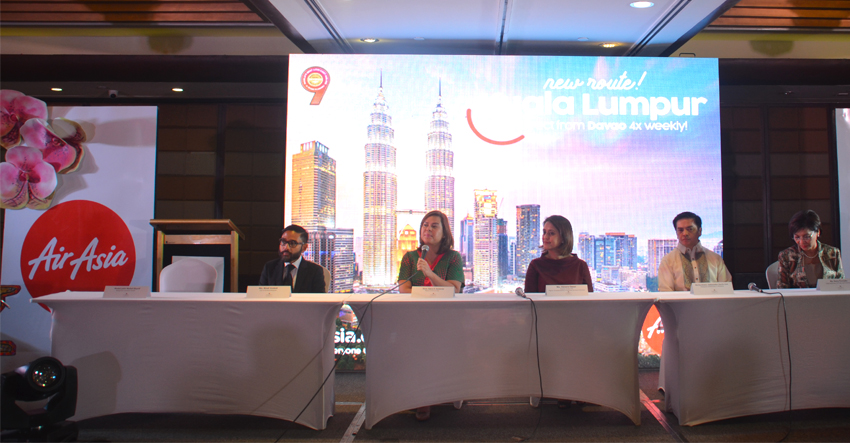 Aireen Omar, the AirAsia Deputy CEO for Digital, Transformation and Corporate Services expressed excitement over the airlines’ first international route to the city.

“We are not only bringing Davao to Kuala Lumpur but to the rest of Airasia extensive networks in Northeast Asia, South Asia, Australasia, Middle East and the US. There are other gems that are yet to be discovered in this region and Davao is one of them. We are optimistic that Davao will do very well as a destination,” said Omar.

Omar also hopes that as they establish international flights to Mindanao, it would bring economic contribution in terms of tourism visits, creation of jobs and opportunities for small and medium-size enterprises (SMEs) and marginalized communities.

The launching was graced by the city mayor Sara Duterte, local tourism and business representatives together with AirAsia officials.

In response, the Mayor Sara Duterter thanked AirAsia in bridging the city tourism efforts to expand its promotion of the Minadanaoan culture and its industries to Malaysia and other neighboring Asian countries through its direct flights and vice versa as they choose the city as the newest point of destination out of Kuala Lumpur.

“Rest assured that we at the city government are doing everything that we can in making the Davao city experience as enjoyable as possible by covering all fronts such as tourism, accommodation, dining options, peace and order situation, traffic and transformation and all aspects fundamental to a pleasant travelling experience,” said the mayor.

Both the city council and AirAsia here committed to work hand-in-hand in the environmental protection, sustainable tourism practices and most importantly, to increase awareness and implementation of Jalal product services.

AirAsia invites Dabawenyos aboard to let them be part of your travel gateway to Malaysia which flies four times weekly and form part in the making of putting Davao on the map in line with the most famous tourism hotspots in the globe.

The said flights have commenced since December last year and have marked as the fourth direct route from Malaysia to the Philippines after Manila, Clark and Kalibo. (davaotoday.com)