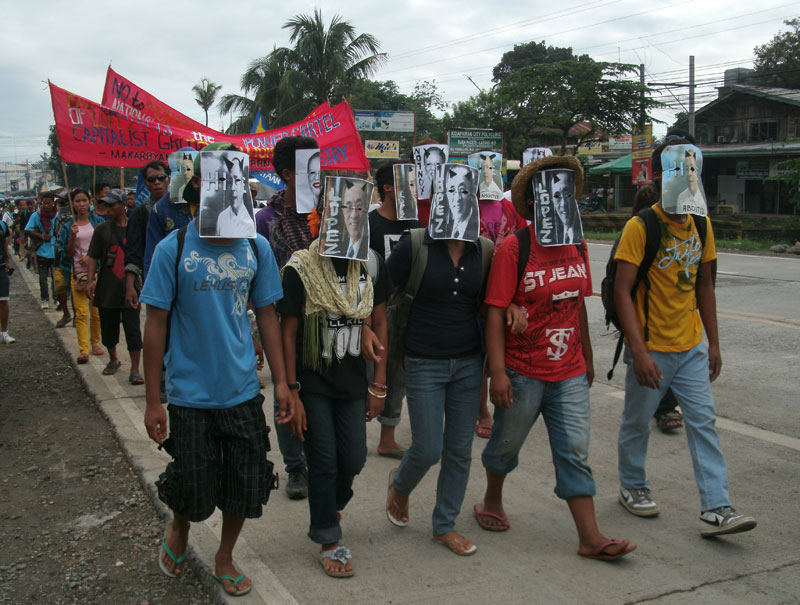 In May last year, power consumers in Cotabato province hold a big protest as they slammed the daily rotational brownouts despite the existence and operations of the Mt. Apo geothermal plants. (davaotoday.com file photo by Alex D. Lopez)

“This is a manifestation of the peoples’ anger over the recurring six to eight hours daily rotational brown-outs,” Ruby Padilla-Sison, secretary general for Makabayan-North Cotabato

Led by the militant Koalisyong Makabayan, the barricaders who came from the towns of Magpet, Arakan Valley, Makilala, Tulunan, Kabacan and Pres. Roxas, stationed along the intersection of national highway-Sudapin road as early as 4 AM and protested until noon today.

“This is a manifestation of the peoples’ anger over the recurring six to eight hours daily rotational brown-outs,” Ruby Padilla-Sison, secretary general for Makabayan-North Cotabato, told davaotoday.com.

Kidapawenos, she noted, “are not morons to be fooled by promises of abundant and cheap power supply from their very own Mt. Apo.”

Makabayan pressed for the immediate release of the 25 percent load dispatch from the Mt. Apo Geothermal Plants which has an installed capacity of 104 Mega-watts.

Under the Department of Energy (DOE) Act of 1992, the local government unit (LGU) that hosts a power-generating facility has a preferential right of at least 25-percent emergency load dispatch.  A Memorandum of Agreement entered into by the host-LGU with the then Philippine National Oil Company (PNOC) in the early ‘90s, also provided a similar condition.
“If it’s true that we are in crisis, why then is the EDC depriving us of such right?  Is this the prize of privatization, allowing EDC to withhold our claim and rechannel our demands to the defunct PNOC?,” Sison said.

Bai Norma Capuyan, third nominee of the Katribu Partylist, echoed Sison’s statement, even recalling that they were those protested the desecration of Apo Sandawa in the ‘90s.

“They (government) used to tell us that the Mt. Apo geothermal project was of national interest, that it would benefit us.  But now the government wants us to suffer the brunt of their inefficiency in managing the power industry,” she told davaotoday.com.

The daily rotational brownout started early this year after the National Power Corporation (NPC)/Power Sector Assets and Liabilities Management (Psalm) arbitrarily cut the power supply of the Cotabato Electric Cooperative (Cotelco) by 30 percent.  In March, the situation worsened as the 13 MW supply from NPC/Psalm was augmented with only 5 MW from the Therma Marine, Inc (TMI).  Cotelco needs 28 MW of power supply to answer the province’s peak demand.

Cotelco Manager Godofredo Homez projected that from this month to June “the situation will worsen,” as the expected allocation from the NPC/Psalm is only of 8 MW while that of the TMI contract is only 5 MW.  For months now, Cotelco is augmenting its power supply by “remarketing” the grid.

Earlier, sectoral groups like the Kidapawan City-Local Council of Women and non-government Philippine Rural Reconstruction Movement petitioned the DOE for the immediate release of the city’s preferential 25 percent emergency load dispatch.  Recently, Kidapawan-Power, a broad alliance of power consumers from the business sector, professionals, youth, civil society groups, religious sectors and cause-oriented organizations convened and expressed their plans to stage a series of protest actions after the May 13 elections.  (Danilda L. Fusilero/davaotoday.com)