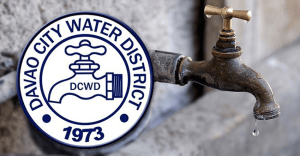 DAVAO CITY, Philippines – The Davao City Water District (DCWD) is studying the possibility of increasing water rate by next year to cope with Tax Reform for Acceleration and Inclusion (TRAIN) law.

“We are in the process of studying it right now and we are doing the preliminaries now. Likely we will be introducing the increase of tariff by next year,” said Bernardo Delima, DCWD spokesperson told reporters.

De Lima assured the public that they are bound with guidelines should the rate increase will push through next year.

“We want to inform the public that when we raise our rate, it entails two requirements that we need to comply,” Delima said.

According to Delima, they absorb all the effects of TRAIN, the reason why they are considering the water rate increase.

“We produce our own money. Whenever we purchase goods, items, and others from private companies, it is all affected by TRAIN so as of now, we are all absorbing the effects of the TRAIN law,” he said.

There is no probable amount however on how much the increase will be.

“We are now considering increasing our water rate but I cannot divulge the entire figure yet because it will be studied carefully,” Delima said.

According to Delima, nothing is final yet because everything will be based on the approval of Local Water Utilities Administration (LWUA).

“But this is still tentative because we still have to undergo the process of LWUA. We cannot just increase the water rate by tomorrow. LWUA will have to check our financial records to see if there is a necessity to increase the rate,” he said.

Delima said it has been 14 years since they increased the water rate in Davao City.