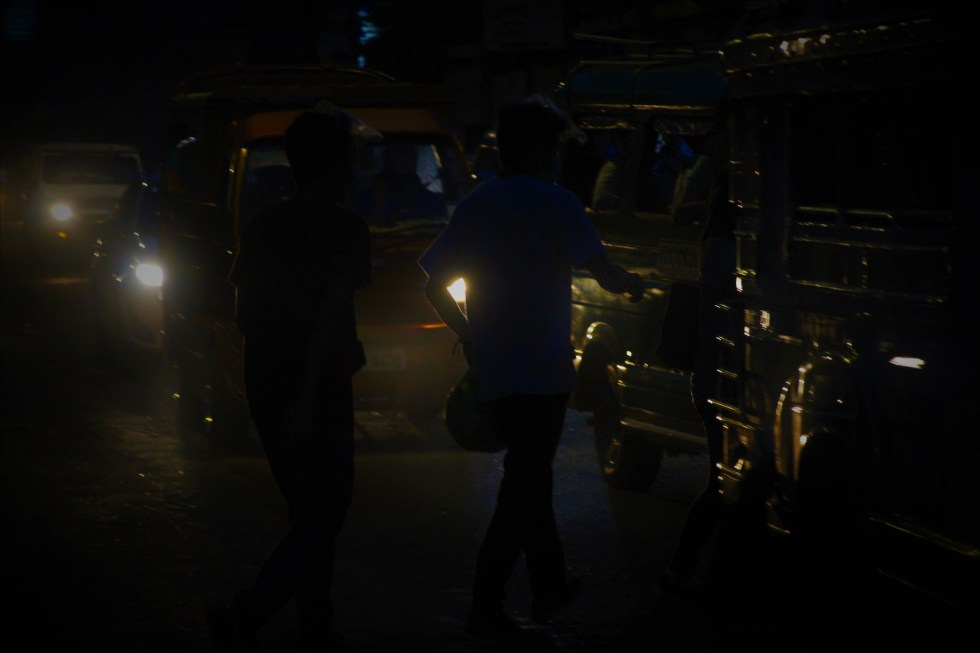 Two commuters are already on the road trying to catch a last ride home before the 7 pm curfew. (Kath M. Cortez.davaotoday.com)

DAVAO CITY, Philippines – Since the re-imposition of curfew hours in Davao City to limit public activities at night due to COVID-19, the commuting public has found this a difficult matter to adjust to.

From 5 pm to 7 pm, downtown Davao sees a daily picture of frantic public commuters enduring a long wait for a ride home after work or doing grocery, or they had to endure walking home.

Felix, a 24-year-old staff of a printing shop in CM Recto, says it now takes more than an hour for him to find a ride to take him home in Panacan after his shop closes at 6pm, an hour before the curfew.

“What is more difficult this time is that there are a lot of passengers who don’t want to violate the curfew, so everyone is in a hurry. But the problem is, jeepneys are also limited because even the drivers are in a hurry to go home. Then there’s rain,” he said.

Felix said there’s anxiety everywhere, from the fear of catching coronavirus to being apprehended and fined for violating curfew, that sometimes he loses patience rushing home.

“It tests your patience and right now what we do is to endure the situation but I hope they would also consider our situation. Even if I am exempted, the reality does not apply to others,” he added. 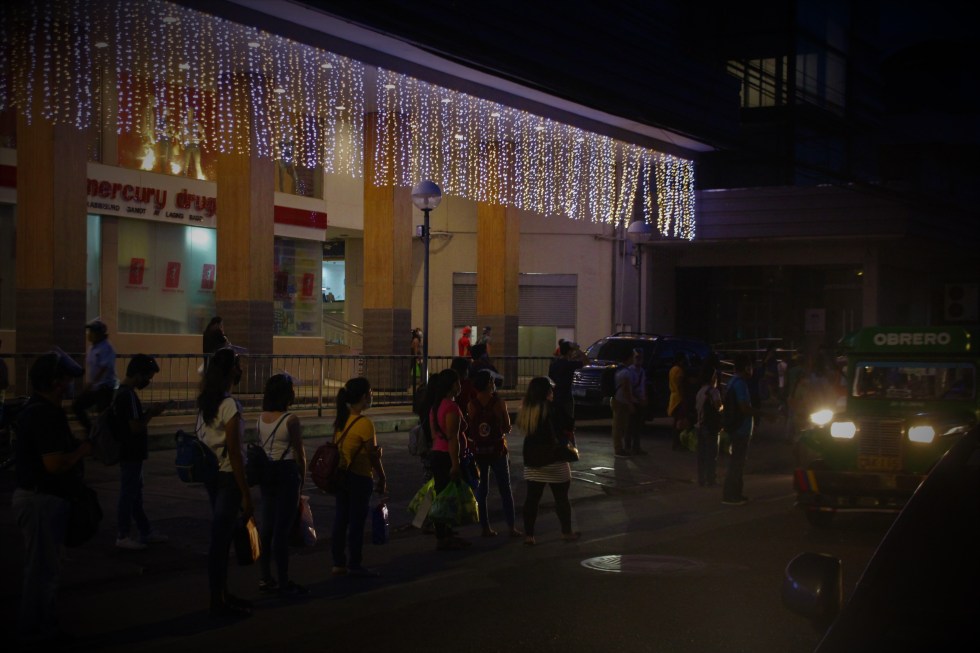 Scores of people wait for an available jeepney ride after doing grocery at a mall. (Kath M. Cortez.davaotoday.com)

Mayor Sara Duterte-Carpio implemented the curfew on October 12, after seeing a spike of COVID-19 cases, which she said is attributed to people engaging in after-work “non-essential” activities.

The mayor has issued exemptions to the curfew, including frontliners, people who work in night shifts.

But that doesn’t solve the problem for Grace, a 23-year old BPO worker, as she finds it more costly now to take a taxi ride from her residence in Catalunan Pequeňo to her work in JP Laurel as jeepneys are no longer plying their routes late at night.

“Compared last time, it is more difficult right now to go to work or even go home. I am a night shift worker and my work starts at 9 pm, most of the time I am forced to ride a taxi because jeepneys at night are limited,” she said.

The Land Transportation Office has exempted jeepney drivers from the curfew, in order to provide transportation to commuters working beyond curfew time. But one jeepney driver, Benicio, said they are discouraged to ply their routes at night because of lack of passengers.

“If I drive at night there are not enough passengers in the street because of the curfew,” said Benicio, a jeepney driver. “So I understand drivers who stop driving at 7 pm to save fuel for the next day. Compared to taxi cabs, our daily income is much lower,” he said.

Netizens have mixed opinions on this curfew, as the nearly 500 comments posted on the City Government of Davao’s Facebook page about the curfew announcement showed.

“The curfew at 7 pm will not slow down the spread of covid19, the opposite will happen as this will build up congestion of warm bodies (workers going home). As we rebuild the economy the premise should be “living with covid19,” said a netizen.

“Ok mana 7pm kng halos tanan pareho sa mga datu naay sakyanan…tapos sa work maka uli dyun2x..kami mga pobre pag out sa work hapit sa palengke ky badget lagi para papanihapon sa pamilya tapos paabot pag jeep na masakyan. (The 7pm curfew is okay if everyone can afford to have their own car so we can drive home right after work. But the poor still have to go out to the market after work with a tight budget and have to endure finding a jeep to take him home),” one netizen pointed out.

The curfew also affected the livelihood of food vendors whose customers are workers or students who come out for a quick snack for riding home. 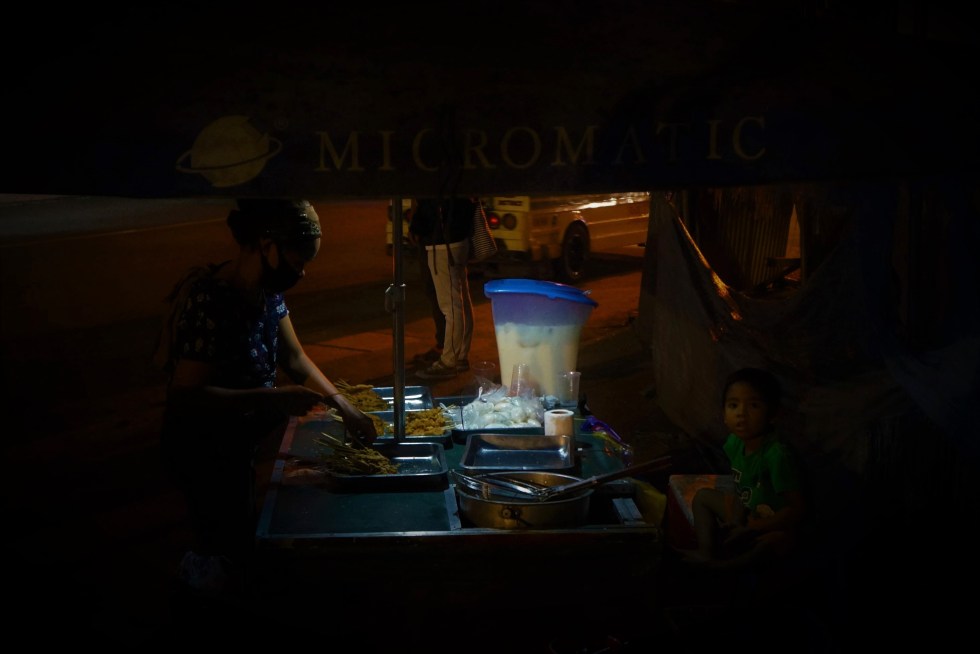 A sidewalk vendor packs away her goods as the curfew drives away her customers. (Kath M. Cortez.davaotoday.com)

Maritess, a mother of two, used to have a stall in Roxas Night Market that was closed at the onset of the pandemic. With the pandemic and curfew, she and her husband adjusted to renting a cart to sell their food in daytime.

Maritess said she was scheduled to have her two-week shift in the Night Market which re-opened last September. But the curfew had limited the store hours, which forced her and other vendors to give up.

“We’ve already paid our rent for the space inside the night market because my husband thought that we can start our business again. We even borrowed extra money in a lending shop for our business, “she lamented. (davaotoday.com)