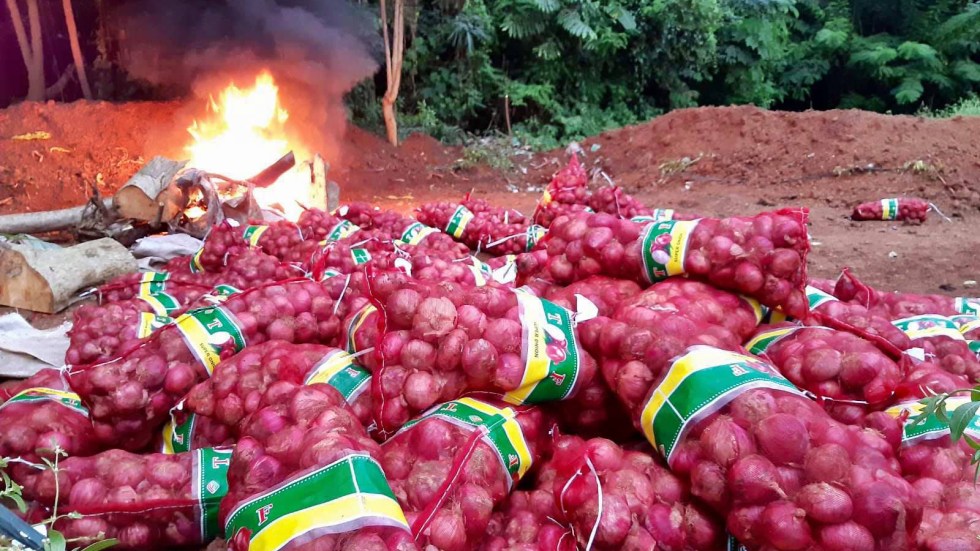 INCINERATED. Bureau of Customs in Northern Mindanao destroys P13.5 million worth of onions from China which the bureau intercepted at a facility in Manolo Fortich town in Bukidnon recently. (Photo courtesy of the Bureau of Customs Region X).

CAGAYAN DE ORO CITY – Imported onions from China wrongfully labeled as food items estimated to be worth P13.5 million were destroyed by the Bureau of Customs-10 (BOC-10) recently, the agency said Tuesday, September 28.

The destruction was conducted inside the facility of Terra Cycliq Corporation in Barangay Mantibugao, Manolo Fortich town, Bukidnon on September 18, BOC-10 said.

According to the Customs in Northern Mindanao in a Facebook post, the onions were burned and buried in a pit inside the destruction facility.

Oliver Valiente, chief of the Customs Intelligence and Investigation Service in the region, said they intercepted the imported agricultural commodity after receiving information regarding the shipment from China which was declared to contain “cream cheese” and “frozen puff pastries.”

Upon issuance of an alert order by lawyer Elvira Cruz, BOC-10 district collector, the shipment was then subjected to a physical examination resulting to the discovery of onions, a violation under Section 1400 of Republic Act 10863 or the Customs Modernization and Tariff Act (CMTA) for misdeclaration.

“Misdeclaration of goods defrauds the government of its rightful revenues,” Cruz said.

A case for violation of the CMTA will be filed against the consignee of the smuggled goods, the collector said.

In a phone interview on September 28, Cris Angelo Andrade, BOC-10 information officer, said the agency decided to destroy the onions as these were no longer viable for disposing through bidding due to the physical condition of the product.

“Many of the onions have started to rot and smell and some have sprouts growing on them. Selling them to the market was no longer an option,” Andrade said, adding that the agricultural produce did not have permits from the Bureau of Plant Industry, Bureau of Quarantine, and the Department of Trade and Industry.

Meanwhile, the BOC-10, through the Bureau’s Action Team Against Smugglers (BATAS) have filed criminal complaints against an importer of cigarettes allegedly smuggled into the country.

The complaint was filed against LMRC 418 Direct Import Export Corporation due to the alleged mis-declaration of two containers of filtered cigarettes and premium filter kings estimated to be worth P78.8 million at the port of Cagayan de Oro on February 2, 2021.

The legal action initiated by the BOC-10 stemmed from the importer’s violation of CMTA in relation to Customs memorandum 20-2006, Tax Reform Acceleration and Inclusion Law, National Tobacco Administration board resolution 079-2005, National Tobacco memorandum circular 3 series of 2004, and the Intellectual Property Code of the Philippines.

“The Bureau of Customs has strengthened its investigation and legal action against unscrupulous importer and customs brokers involved in illegal and irregular activities,” the agency said.