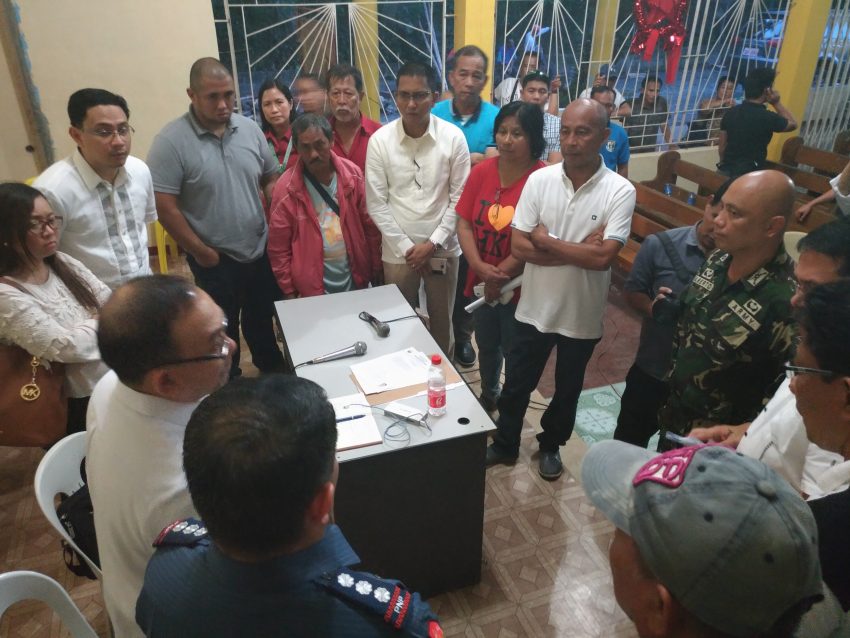 In this file photo last Dec. 19, Department of Agrarian Reform Undersecretary for Legal Affairs Atty. Luis Pangulayan (standing on the left side of the policeman), summarizes the points discussed during the dialogue between the agrarian reform beneficiaries and the Lapanday Foods Corporation. DAR stressed during the dialogue that the cease and desist order issued in favor of the farmers should be respected by all parties. (davaotoday.com file photos)

DAVAO CITY, Philippines—The Department of Agrarian Reform welcomed the resolution by the E​ight D​ivision of the C​ourt of A​ppeals last Jan. 6, denying the Lapanday Food Corporation of its application for a temporary restraining order in the recent conflict with a banana growers  cooperative in Tagum City.

“Measures undertaken to ensure such condition as directed in the Cease and Desist Order should not be interfered until the final adjudication of the merits of the petition,” the resolution reads.

DAR Secretary Rafael Mariano issued a cease and desist order last December  following the tension between Lapanday and the members of the Madaum Agrarian Reform Beneficiaries. The latter had claimed ownership of the 145-hectare piece of land inside the compound of banana firm.

A shooting ensued when farmers attempted to enter the fenced compound in December and security personnel prevented them. Ten farmers were wounded.

In a press statement, DAR said “the resolution issued by the court deemed it appropriate to deny Lapanday’s application for TRO and/or preliminary injunction citing that ‘it may very well give rise to a tug-of-war scenario over the physical possession of the land allocated by the Provincial Agrarian Reform Adjudicator of Davao del Norte to MARBAI members.'”

DAR said the banana firm challenged its CDO through a Petition for Certiorai before the CA, and questioned its jurisdiction to issue such order, as “it is not granted by the Comprehensive Agrarian Reform Program (CARP) or Republic Act No. 6657.”

The farmers, however, successfully  entered the compound but on Dec. 30, security guards of the Lapanday forcibly booted the farmers out who were staying inside the compound.

Pañgulayan said that the anyone who violates the CDO issued by the secretary is guilty of contempt.

“The CDO is based on the quasi-judicial powers of the secretary. Any person who ignores or violates the CDO is guilty of contempt,” he said.

“It is time to summon the contempt powers of the DAR secretary through the proper petition to protect the rights and interest of the Marbai members,” he added.

Last week, in a dialogue with farmers here at the Rizal Park, Sec. Mariano said the Lapanday would face contempt if the Marbai farmers will not be reinstated immediately.

“No one can prevent DAR from installing the farmers to their farms and announced that he will personally lead their installation,” Mariano said. (davaotoday.com)