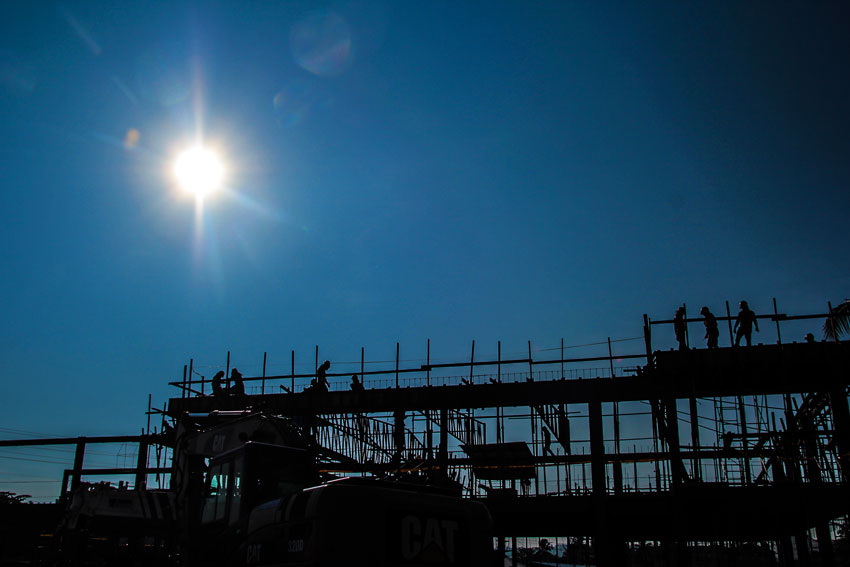 Despite the scorching heat of the sun, these workers of an ongoing building construction along Ponciano Reyes Street continue to work. (Ace R. Morandante/davaotoday.com)

DAVAO CITY, Philippines – City Mayor Sara Duterte-Carpio said the local government has completed a total of 542 new infrastructure projects from the period of July 2016 to June this year.

The finished projects amounted to a total of P666,317,387.18 coming from various sources of funds.

During her first State of the City Address on Tuesday, September 12, the city mayor said from July to December 2016, a total of 325 infra projects were done, while 217 projects were finalized from January to June this year.

In 2016, the city has completed 86 building and other structure projects, 86 drainage projects, 137 road/bridge projects, 14 water system projects, and two electrification projects which amounted to a total of P339,186,417.68.

Meanwhile, from the period of January to June, the city completed 54 building and other structure projects, 45 drainage projects, 104 roads/bridges, 11 water system projects, and three electrification projects with a total of P327,130,969.50.

Apart from the accomplishments, Duterte-Carpio also mentioned the Department of Public Works and Highways’ (DPWH) multi-billion projects in the city, the Bypass Road and coastal road which are set to begin construction this year. It is aimed “to ease traffic congestion in downtown areas of the city.”

The Davao-Samal Bridge, a project between DPWH and Japanese International Cooperation Agency (JICA) is also set to start late this year or early 2018.

“These studies will provide us with the much-needed list of infrastructure projects needed to be funded to benefit the city,” she said. (davaotoday.com)