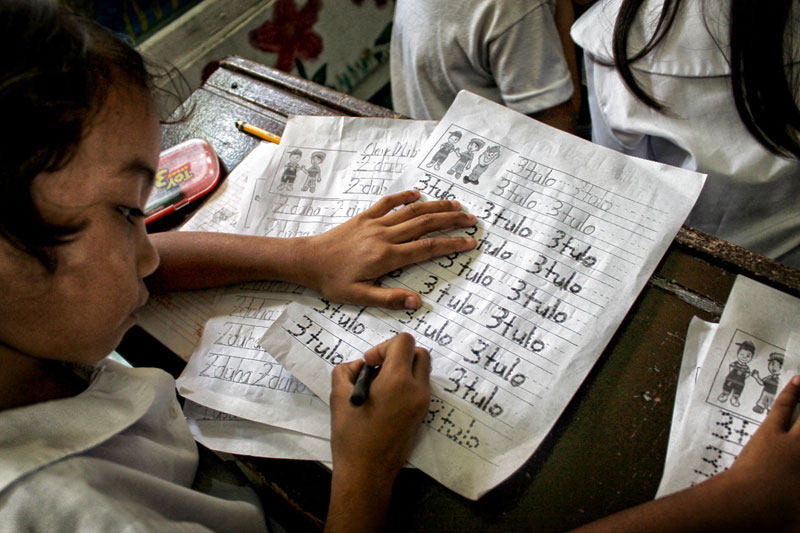 Parents, students and teachers have long been complaining of the yearly shortages in textbooks, classroom and teachers.  The budget on education has also been seen as the major problem as it’s deemed “insufficient.”

DAVAO CITY, Philippines – The signing into law of Republic Act No. 10533 or the Enhanced Basic Education Act of 2013 (K+12 Law) by President Noynoy Aquino came as a surprise, especially to those who have been opposing it.

“We’re in the middle of a fiasco because of the fraudulent elections and yet the Aquino government suddenly signed the K+12 Law,” said Andrew Zarate, spokesperson for Anakbayan in the National Capital Region.

Zarate noted that despite the many criticisms against the program, with the shortages in school facilities and teachers, among others, the government still pushed the law on Wednesday, just two days after the mid-term elections concluded.

The program, according to the Aquino government, “will provide sufficient time for mastery of concepts and skills, develop lifelong learners, and prepare graduates for tertiary education, middle-level skills development, employment and entrepreneurship.”

But since the program’s inception, it has already been widely criticized.

Laywer Leah Librado-Yap, Davao City’s first district councilor, for example, said the program is not apt in a country where economic condition is worst as well as the educational system.

The local lawmaker told davaotoday.com that the law “will be an additional burden to most Filipino families, especially mothers, who could barely send their children to school.”

This as the country’s average daily minimum wage is barely enough to sustain the daily basic needs of a family of six, the average size of a Filipino family.

Even Gabriela Women’s Party Representative Luz Ilagan said that parents need to scrounge for their children’s food and transportation expenses aside from making sure that no fees are collected.

Both parents and students have already been struggling to finish the current cycle of 10 years of education sans Kindergarten.  Thus, additional years of education, as mandated by the K to 12 Law, would mean more drop outs.

GWP cited data that out of the 100 children who enter Grade 1, only 14 children are able to finish Grade 6, an indication that parents would be more unable to accommodate two more years of education under the K+12 Law.

“It’s like prescribing the wrong pill,” Ilagan said on the K+12 Law, as she feared that it would only make the current education situation worse.

Parents, students and teachers have long been complaining of the yearly shortages in textbooks, classroom and teachers.  The budget on education has also been seen as the major problem as it’s deemed “insufficient.”

“Our budget, school infrastructure and manpower also falls terribly short of what the K+12 demands,” Ilagan said noting that during the program’s initial implementation, problems were encountered like teachers who have to work for several more hours than what is required, and that they don’t have proper training, curriculum or orientation.

Vencer Crisostomo, Anakbayan National chairperson, also expressed fear that with the K+12, the government would abandon more the tertiary education with the series of budget cuts for state colleges and universities and opening the latter to privatization.

He also called the program as a means to create “cheaper, more exploitable labor,” saying it will make the more semi-skilled workers enter the labor force as early as 18 years old, which could make unemployment problem worse and result to lower wages.

Meanwhile, Librado-Yap debunked the government’s claim that the K+12 will generate more jobs.  She said that in order to achieve this, “We need to industrialize and country and implement genuine land reform.” (davaotoday.com)