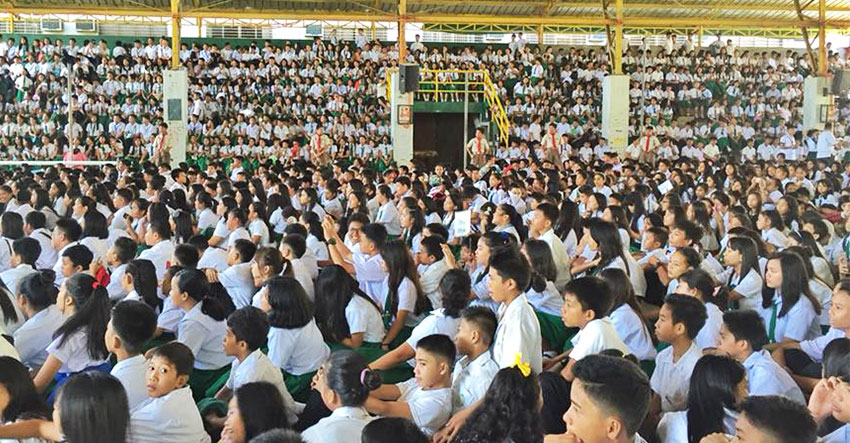 DAVAO CITY, Philippines — A labor official noted that few companies in Davao City offer job for senior high school (SHS) graduates despite the assurance from the Department of Education (DepEd) that the K to 12 Program will equip students with values, knowledge, and skills needed to work in various industries.

DepEd has envisioned a program for Filipino students for them become prepared in entering the higher education and promised that student will be capable in both starting to put up a business or land a job without even obtaining a college degree.

The K to 12 Program has already produced 1.2 million pioneer graduates of senior high school under the new education reform program who completed the Technical Vocational – Livelihood (TVL) track in 2018 and an additional 480,000 SHS graduates this year.

Despite the program, a different scenario actually persists in Davao City in terms of hiring SHS graduates, as it seems they are being left behind in landing decent jobs as most companies prioritize individuals with a diploma, some of these companies are also reported to be “still hesitant to hire someone who does finished college”.

In the study conducted by the Philippine Business for Education (PBED), only 20 percent of the 70 leading companies in the country are interested to hire senior high school students despite their another study that highlights a 93 percent competency rate of senior high graduates to land a job for having a critical thinking and problem-solving skills.

The Public Employment Service Office or PESO in Davao City for instance also admitted that many companies in the city do not really offer employment for senior high school graduates.

PESO OIC Manager Lilibeth D. Pantinople told reporters that there are only minimal companies that are open in giving opportunities for SHS graduates. Many of these companies, she said, are from the service sector like malls and fast foods, labor, and Business Process Outsourcing (BPO).

“I guess they are hesitant to hire senior high graduates because they see them with some lack of necessary skills and training that are the very core qualifications of business establishments nowadays. These qualifications are not provided nor practiced by our senior high schools,” Pantinople said.

Local and national companies also prefer to have an age requirement of at least 18 years old for their employees, which according to PESO, is not complementary to many SHS graduates.

To ensure that the city government can provide livelihood, Pantinople said they provide opportunities to SHS graduates who do not want to pursue their education.

They can now apply through the Special Employment of Students (SPES) program of the city government, Pantinople said, adding that SPES will not just be a summer vacation job but will be all year round.

“For now we have 700 job pledges for both senior high and high school graduates as well as college level students,” she added.

Bryan, a 17-year-old senior high school student of Davao City National High School now worries if he can land a job after the two years extension in high school. He was the fourth among the six siblings in their family.

He will graduate this school year 2018-2019 but not certain if he can proceed to college as his two siblings are now working to earn a living for the family. His older sister now works as a cashier in a local convenience store while his second oldest brother helps their father as a construction worker. The other three younger siblings are studying in a public elementary school.

“They said I can apply for a job after I finished senior high because it is the requirement now. I am certain that as my siblings, college is impossible for us and we need to work to help the family,” Bryan said.

In his age, Bryan has difficulties in reading and has a poor understanding of English communication. His grade is also problematic that he said might affect his future after school and in getting good employment.

Erlinda G. Mamitag, Chief Labor and Employment Officer of Davao City Field Office (DCFO) also told reporters on June 7 during the launching of the Kalayaan Job and Business Fair 2019 that that there are only limited opportunities that await SHS graduates.

The labor official said the national agency is now sorting out ways on how to help the new sector in finding appropriate jobs. They are now in constant talk with employers, inviting them to participate with the agency’s job fair.

When asked if these employers offer jobs that are under the new education program track of the DepEd, Mamitag said the agency has only limited talks with service and BPO companies that are most probably willing to hire.

“Both the DOLE and DepEd are now doing its job to address the mismatching of jobs to ensure these graduates can work” Mamitag said.

She did not finish her senior high school due to a family problem that forced her to stop schooling. When she tried to apply in a fast food chain in the city, the management required her internship for a cookery course.

“I only finished grade 7 and I need to find a job to help my family cope up with daily expenses. Still, I can’t any because they want at least a college level,” she said in an interview.

Sonny Africa, Executive Director of IBON Foundation, an independent non-government organization providing research, information, and education services said there are two things to point out in both the implementation of Kto12 program and the problematic unemployment status in the country.

First, Africa said the government has failed in believing that the primary solution to unemployment in the country is providing an education program based on the employment demand. He pointed out that educational attainment is not the only solution in addressing the country’s problem of jobs creation, as government support on sectors creating a good economy is limited.

“Our government has limited support for our agriculture sector for example and there is no budget to build our own industry. These sectors can provide jobs for Filipinos and can help our country to become sustainable,” he said.

Second, it is obvious that the government is not ready to implement the K to 12 program.

“Our teachers are lack of training and capacity to teach while we also have problems in the shortage of facilities needed for our students. In short its hinog sa pilit,” he added.

Kilusang Mayo UNO- Southern Mindanao called the program an “additional burden” for the majority of poor families living with minimum or less than minimum wage earning.

The group said many parents are dismayed over the implementation of K to 12 especially when it also means another additional year of spending for education with uncertainty if their children can be employed later.

“Instead of giving the people an additional burden, the government should look first if we can enough job to accommodate our people. Even if we have reforms in our education system but when they graduate, there is no job waiting for them then it is still useless,” KMU-SMR Deputy Secretary General Elizer Diayon said.

Through the K to 12 programs, it will only produce “a bunch systematic labor” but it does not pay attention to the quality of education it provides, the group added. (davaotoday.com)