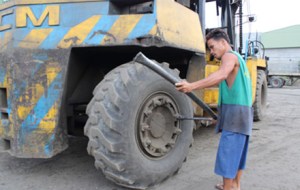 MONKEY WRENCH. A tire half his size is never too huge for Luis Luchavez, no matter how poorly he is paid by the company where he is employed. (davaotoday.com photo by Medel V. Hernani)

Davao workers say they are working harder but paid lesser.

DAVAO CITY, Philippines — The Philippines was recently reported to be the third country in the world that has the lowest salary increases.  And that news is not farfetched when Davao workers say they are working harder but paid lesser.

Luis Luchavez, a tireman for a big shipping company, Sulpicio Lines, sees to it that the tires of a 25-tonner forklift are functional.  “I only get paid according to the number of tires I repaired.  If there are no flat tires, then I am not paid,” he tells Davao Today.  There are times when he repairs in the dead of the night, without ever receiving an overtime pay.

A January 17 report carried by the online news businessworld.com cited a study by India-based recruitment platforms MyHiringClub.com and NriJobPortal.com pointing to the country’s salary increment outlook of 4.21 percent in 2012, next to Bulgaria (4.03 percent) and Vietnam (4.13 percent).  The country’s performance is way, way below the worldwide average of 10.19 percent.

Luchavez is one of the 1.875 million workers in Davao Region.  His income is practically based in the number of repairs he makes.  “If our bill reaches 4,000 pesos (USD 93.74), that’s the time we can get our salary,” he said.  Of the whole amount, 50 percent is shared for the shop owner, 25 percent for Luchavez and the remaining 25 percent for his fellow tireman.

In the Davao Region, the minimum wage is pegged at PHP 286 (USD 6.7), not enough for a family of six who needs at least PHP 720 (USD 16.87) a day according to the National Statistical Coordination Board.

Ramil Sencio, 38, a factory worker for 20 years, receives the basic pay.  Married and with two children, he says, his salary is not enough for their basic needs.  “If I have no work, I ply my motorcycle or do electrical jobs for extra income,” he said.

Like Sencio, Luchavez has to find other ways to feed his family and pay for house rent and his child’s tuition.  If he’s lucky, he can earn about PHP 140 (USD 3.28) as a van stripper for a day.  He also sidelines at a vulcanizing shop.

First-time father McKenney Mapula, 25, a helper-cum-driver in a water refilling station for seven years, says he only receives PHP 211 (USD 4.94) for a day’s work.  PHP 85 (USD 1.99) is deducted from his salary every week for Philhealth and Social Security System contributions, reducing his take-home pay to PHP 195 (USD 4.57) daily.

But for lawyer Bienvenido Cariaga, former chairperson of the Davao City Chamber of Commerce and Industry and now representative of the Regional Tripartite and Wage Production Board (RTWPB) for the employer’s sector, “based on our computations, the current minimum wage is enough.”

RTWPB passed wage board order No. 17 which integrates the PHP 15 (USD 0.35) cost of living allowance (COLA) to the basic pay.  From the previous PHP 271 (USD 6.35) basic pay for the non-agriculture sector, it increased to PHP 286 (USD 6.7) effective January this year.  Another PHP 15 COLA was also given.  The RTWPB, implemented by the government in 1989, is an agency that dictates the wage and COLA per region.

“The RTWPB is an instrument used by the government and capitalists to give workers a pittance,” Romualdo Basilio, chair of the labor group Kilusang Mayo Uno-Southern Mindanao region, said.

He added that, “Most of the resolutions issued by RTWPB were actually COLAs, and not increases in basic pay.”

Workers under KMU have been calling for a PHP 125 (USD 2.93) wage increase across the board or for all workers in the country.  But until now, the Congress has neither approved nor prioritized the bill that seeks to alleviate the condition of Filipino workers.

“I would have resigned a long time ago if there are job opportunities with better pay for someone like me,” Mapula, a high school graduate, hoped.

Meanwhile, Sencio said, “My other co-workers are planning to look for another job because the salary is really not enough to support their families.  But my family will just have to systematize our budget, for now, even if that means we can’t eat decent foods.”

For Luchavez, “If there are better-paying jobs, I will really go for it.  But for now, I have to bear this; otherwise I cannot feed my family.”

As for workers elsewhere in the world, those in Denmark topped the list in the highest salary hikes with 16.49 percent, according to the BusinessWorld online news.  Other countries in the list include Ireland, United Kingdom, Switzerland, Belgium, Germany, Hongkong, Australia and the United States.  (With reports from CJ Kuizon, Marieta Baste-Hernani and Medel V. Hernani/davaotoday.com)