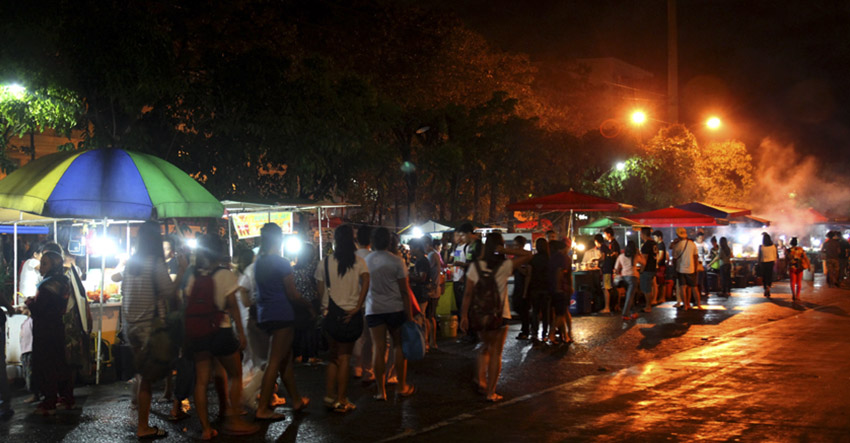 DAVAO CITY – Although already crowded, the night market located along Roxas avenue here is still open to vendors who wish to sell their products.

The head of the Drainage Management and Demolition Unit (DMU) Retired Colonel Yusop Jimlani said there are 63 available slots in the three categories — food, clothing, accessories in the night market.

He said 32 slots are available for the accessories category, eight slots for the food category and 23 slots for those selling clothes.

The City provides the vendors with 1.5 meter by 2 meters.

For those interested, Yusop said that the City Treasurers Office only collects P25 per night where P10 is allotted for the light usage and P15 for the space provided.

Night market expansion Yusop said that they are planning to open night markets also in other areas in the city, including the areas in Toril, Agdao, Sta. Ana and Ilustre extension.

He said they will let vendors occupy the vacant slots in Roxas Ave. first before expanding it in the free space that is located facing the Quimpo Boulevard road.

The night market provides livelihood to an estimate of 690 to 700 vendors, Yusop said.

In the first two months of this year, Yusop said the collection of the DMU already reached P1 million pesos and on the month of March alone they have collected P632,962.26.

Yusop said that he is positive that in this year the collection will double because there are a lot of vendors who are willing to open their business in the night market.

Meanwhile, DMU head also explained that the traffic jam in the Roxas avenue during the start of night market hours is caused by carts used by the vendors since most of them parked it at the other side of the space.

“Night market is composed of several technical working groups, one of these is the City Transport and Traffic Management Office (CTTMO) who regulates the traffic,” Yusop said.

“These stores should remember that the Roxas road is not to be used for their parking space,” Yusop said.(davaotoday.com)