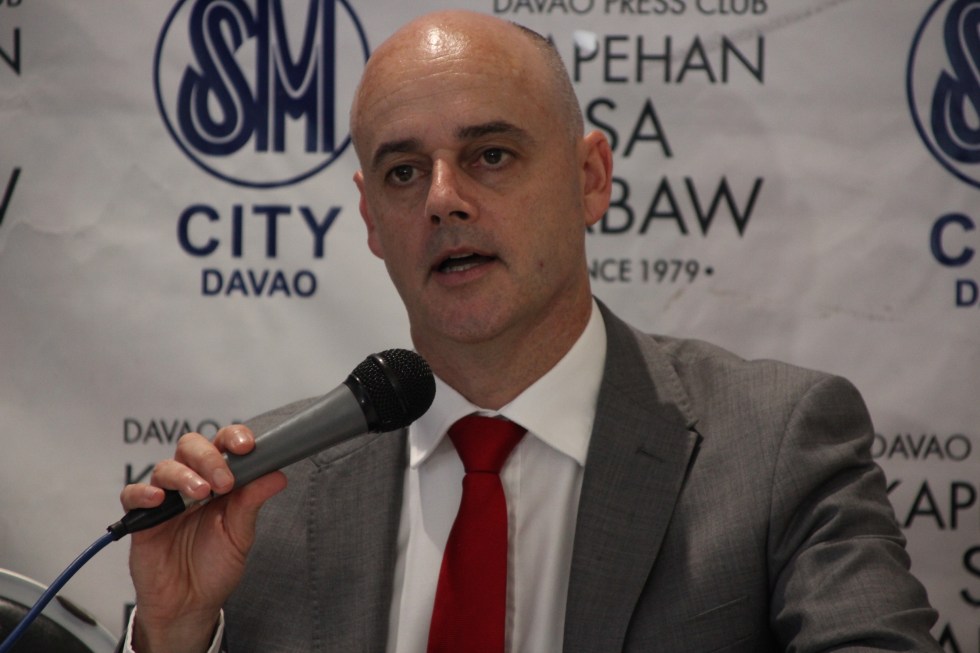 Mat Kimberley, deputy head of Mission of Australia to the Philippines, presents the week-long activities in celebration of the Phil-Australia Friendship Day slated on May 22 during Monday’s (May 21, 2018) Kapehan sa Dabaw at SM Ecoland, Davao City.(Kath M. Cortez/davaotoday.com)

DAVAO CITY, Philippines — In celebrating close ties and friendship between the Philippines and Australia, the Australian Embassy hopes for many more years of good cooperation between the two countries.

Australia and the Philippines mark 72 years of bilateral relations on Tuesday. Formal relations started with the opening of the Australia’s first Consulate General in Manila in May 1946.

Speaking before the Kapehan sa Dabaw, Mat Kimberley, Deputy Head of Mission from Australia to the Philippines described the Duterte government with its strong push for reforms and encouraged the continuation in the effort against corruption.

He added that the depth of the relationship is important despite changes in the government of Australia.

With the two-way trade between the two countries reaching about A$ 4 billion. Contributing to such, according to Kimberley is the common interest in light industry, several Australian companies exporting beef and importing raw materials from the Philippines.

Two-way merchandise trade expanded 66 per cent between 2010 and 2014, to A$2.9 billion. Major Australian exports to the Philippines include metal ores and concentrates, copper ores and concentrates, wheat and beef. Philippine exports to Australia include heating and cooling equipment and parts, mechanical handling equipment, pumps and parts, and electrical machinery.

“The Australian New Zealand Chamber of Commerce is active right across the country and the Philippine Australia Business Council based on Sydney is also active in promoting and helping businesses of both countries despite the differences in systems and approval processes. The business associations in both countries worked very hard to promote each others countries and the opportunities; how to navigate different regulations and how to start things off,” he added.

Furthermore, Kimberley sees the importation in mango as a prospect in trade given that mangoes in Australia grow for only six months in a year.

The Australian Center for International Agricultural Research (ACIAR) along with Philippine Council for Agriculture, Aquatic and Natural Resources Research and Development of the Department of Science and Technology (DOST-PCAARRD) conducted a research in mango production that would result to the Island Garden City of Samal a mango value chain model.

In celebration of the Philippines-Australian Friendship Day, the Australian Embassy and the Australia Global Alumni, together with the Davao City Government will have week-long festival from May 21-27. (davaotoday.com)