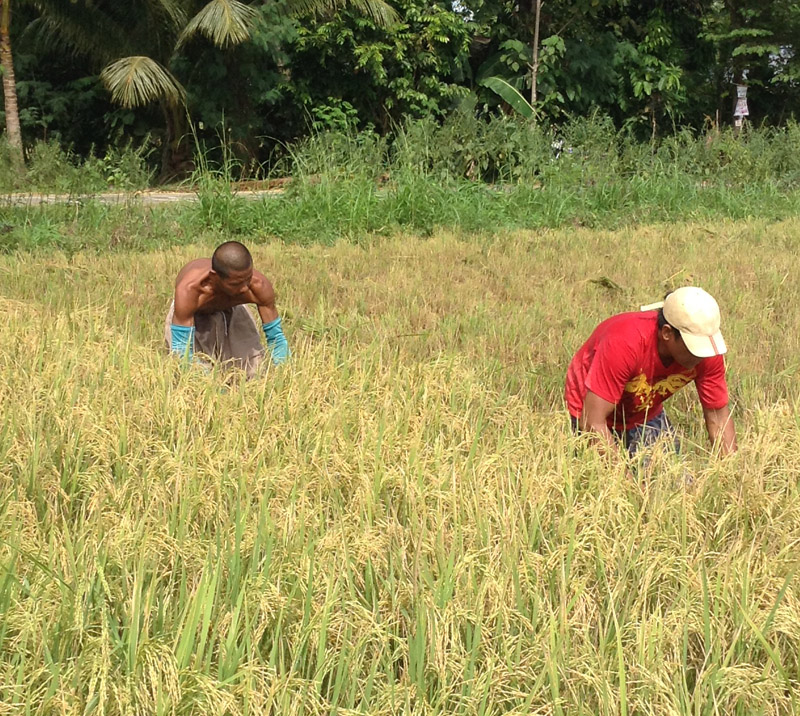 HARVEST OF GOLD. Farmers in Pigcawayan town in the province of North Cotabato enjoy their rice harvest after over three months of drought (davaotoday.com photo by Kenette Jean Millondaga)

DAVAO CITY – Davao City Mayor Rodrigo Duterte who appeared before the Senate Committee on Agriculture and Food hearing Monday said the current state policy on importation of rice does not benefit the Filipino farmers.

The hearing which was also attended by Davidson Bangayan, a rice importer accused of being a big-time rice smuggler using the name David Tan, also tackled “loopholes” of the country’s importation laws.

At the heart of the inquiry over rice smuggling in the country is that smugglers have been exploiting a “grey area” in the law when the  rice quantitative restrictions (QR) set by the World Trade Organization (WTO) expired two years ago.

According to research group Ibon Foundation, the quantitative restriction on rice allows the Philippines to “limit the volume of rice that can be imported by the Philippine government through the National Food Authority (NFA).”

According to Customs Deputy Commissioner Agaton Teodoro Uvero, in news reports said that a total of 50,000 tons of rice per week were smuggled in the country last year.

“The retention of QR on rice is important in protecting local farmers and should be implemented fully despite pressure from other countries,” said Ibon in a statement last June 2012 when the restrictions expired.

Ibon said that “pressure” comes in the form of “imposing concessions in exchange of the rice QR extension.”

According to news reports, in 2005, the Philippines agreed to increase its minimum access volume (MAV) for rice to 350,000 metric tons at reduced tariff rate of 40 percent in exchange for extending the restriction of the QR until 2012.

As a member-country, the Philippines is duty bound to import rice from other WTO member-countries to satisfy its MAV despite pronouncements of the government that it will not anymore import rice by 2014.

To extend the QR on rice for 2012 and beyond, Ibon said that the country has to engage again in bilateral talks with other WTO member-countries.

The government reportedly requested the extension of the lifting of the QR last November 2011 and the WTO temporarily waived it so the country could conduct bilateral talks with other countries to extend it to 2017.

Philippine trade authorities claimed that the restriction stays as no country has so far made objections with regards to such requests in the 9th Ministerial Conference of the WTO in Bali last December.

But for Ibon, the agreement now known as the Bali Package  “will worsen the country’s rising merchandise trade deficit and make it even more difficult to create the domestic conditions for local agriculture and industry to develop.”

“The most important component of the approved Bali package reached is the agreement on Trade Facilitation which simplifies customs and other bureaucratic procedures to make trading easier,” Ibon said.

No benefits under WTO

Ibon claims that the “Philippines’ experience” under the WTO established in 1994 shows that it “has not benefited from the supposedly more liberalized trading environment.”

“The country’s merchandise trade deficit increased from US$7.6 billion in 1993 to US$13.4 billion in 2012. Cumulatively between 1994 and 2012, Philippine exports increased by US$704.1 billion while imports increased US$844.9 billion. The hyped US$1 trillion of benefits, if this even materializes, will accrue mainly to the already developed countries,” Ibon said.

Senators in the previous hearings demanded that the Department of Justice should have a legal opinion on how to go about the seeming “conflict” between the WTO policy and Philippine laws.

However, Justice secretary Leila De Lima said “there is real conflict” with the WTO policy and local laws but her office and the office of the Solicitor General are still studying their legal stand on the matter.

De Lima said they are also mulling on filing administrative cases against the court judges who issued injunctions on the smuggling cases.

Meanwhile, a former partylist representative argues that “crises” such as rice supply insufficiency and increasing rice prices is here to stay as it is already “embedded” in the country’s “semi-feudal system”  and “aggravated” by its submission “to the dictates of the US and other foreign interests” by virtue of its membership to the WTO.

“The only solution would be genuine agrarian reform. Lands must be distributed to farmers and they must be supported by government,” said former Anakpawis representative Joel Maglunsod.

Maglunsod, now Mindanao Spokesperson of Kilusang Mayo Uno (KMU), said that Anakpawis has filed the Genuine Agrarian Reform Bill (GARB) but the “landlords” who “dominate” Congress “have no plans of approving the bill as it will go against their interests.”

For IBON executive director Sonny Africa, the government “should acknowledge the decline in agriculture due to its decades-long engagement in free trade and rethink its policies.”

“For agriculture to become the base of economic development, the state’s economic program including its foreign trade policy should include protecting and supporting small farmers to develop local agricultural production, increase rural employment, and achieve food self-sufficiency,” said Africa. (John Rizle L. Saligumba/davaotoday.com)