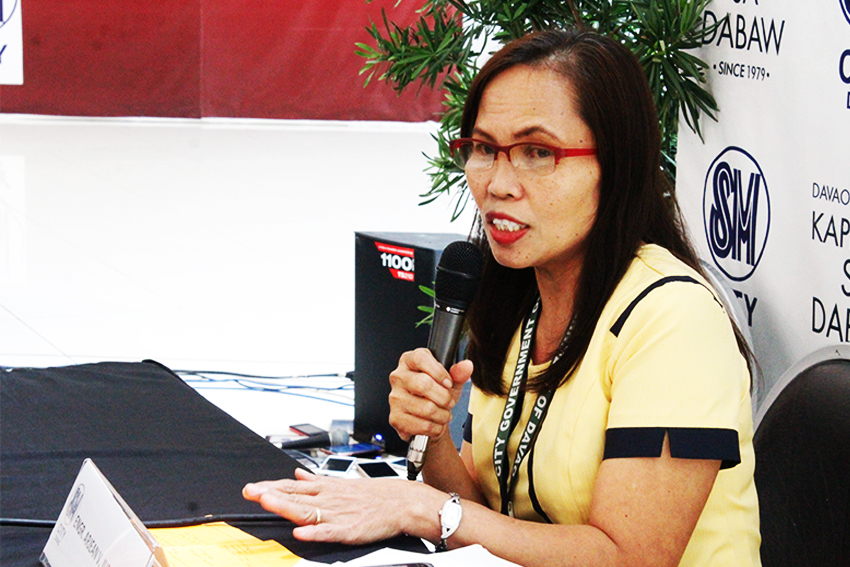 Engineer Arjean Jumamoy of the City Engineers Office says in a press conference on Monday that the Rainwater Collection Ordinance certification is required before the issuance of a building permit. (Photo by Marlo Joshua Brua, Intern)

DAVAO CITY, Philippines — The City Engineer’s Office said Monday that a rainwater collection system is mandatory before they will issue the certificate of occupancy.

Engr. Arjean V. Jumamoy, a representative from the City Engineer’s Office told Kapehan sa Dabaw, that the order was based on City Ordinance No. 0298-09 series of 2009 which was implemented last month.

The ordinance contains provisions on the proper harvesting, storage and utilization of rainwater in Davao City.

“This ordinance is a requirement only to those new applicants for new building permit for residential, commercial and institutional,” Jumamoy said.

Jumamoy noted that the purpose of rainwater collection is to mainly conserve water and to utilize rainwater for non-potable purposes such as flushing the toilet and for general cleaning purposes.

“Actually, we won’t only conserve water but also the energy because if we have rainwater, there will be a lesser energy used in pumping for our municipal water,” she stated.

She added that “we are just too confident that we are have constant rain here in the city but the people don’t know that our water resource is actually deflating.”

Those who are applying for new building permit will pay a corresponding fee of P12 per two cubic meters for any residential water storage while P480 for three to ten cubic meters for commercial buildings.

“Upon claiming the permit, they should indicate in their plan what is their RCS. After the construction of the building, they need to have a certificate of occupancy. In the implementation, we will not approve the certificate of occupancy if there are no actual installment of RCS that is connected from their gutter going to the tank,” Jumamoy pointed out.

According to City Engineer’s Office, Davao City government earned an income of P380,542.80 in the issuance of residential-commercial building permits for 2015 and P591,159.60 for 2016 collection based on the rainwater collection system.

“So far, when we started the implementation last 2015 for the requirement of the RSC for new building permit, there was a resistance from the applicants but we did not let that affect us since it is already a mandatory requirement,” Jumamoy stated.

Jumamoy also said that there were no tallied violators sanctioned since the ordinance was implemented.

For 2016 alone, there were 3,879 permits issued with a requirement to have a Rainwater Collection System, much higher when compared to 2015 where there are only 2,497 permits issued. (davaotoday.com)