DAVAO CITY, Philippines — Some of the taxi units here are now charging with the new fare rate as the Land Transportation Franchising and Regulatory Board (LTFRB) region 11 started the recalibration process early this year, which earns the ire of most commuters on social media.

In an interview with Davao Today on Thursday, January 25, lawyer Teresita Dela Peña-Yñiguez, director of LTFRB-11 said the agency started to recalibrate taxi units since January 8.

Yñiguez said the decision to raise the fare was made in October last year but the implementation was delayed because they were “waiting for the central office to issue the guidelines”.

The new fare will be P13.50 per kilometer from the P3.50 for every 300 meters traveled. There will be additional P2.00 per minute of running time from last year’s P3.50 per two minutes waiting time. The flag down rate will remain P40.00. 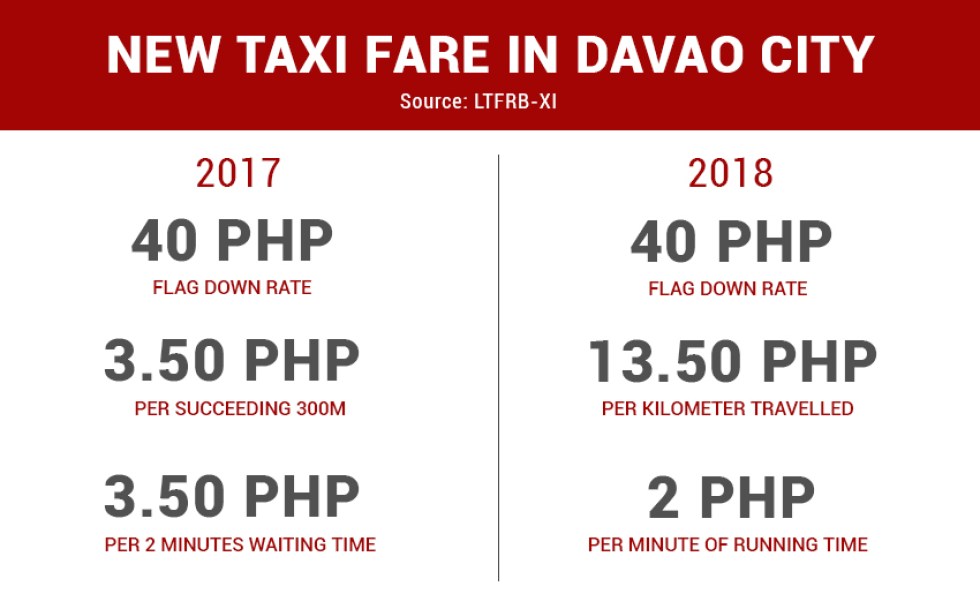 For instance, an 11.5-kilometer trip from Davao International Airport to San Pedro Street, which takes 36 minutes (based on Google Maps estimation), with a 15-minute waiting time would cost:

Yñiguez said passengers should only pay the new rate if the unit is already recalibrated and has the new LTFRB seal.

“Taxi operators you’re supposed to instruct your drivers not to charge the new fare structure unless your unit has already been calibrated and tested,” said Yñiguez.

The LTFRB-11 is eyeing to calibrate all the taxi units with the new rates by next month. To date, around 150 units were already calibrated out of more than 5,500 taxis in the city.

Yñiguez urged all the operators to head to the old airport in Sasa to undergo the recalibration process.

She also maintained that the timing of the increase is not related to the increase in fuel price due to the added excise tax under the Tax Reform for Acceleration and Inclusion (TRAIN) Law.

In October 2017, LTFRB board member Aileen Lizada said that the fare hike is part of their move to phase out taxi units which aged 13 years or older during the recalibration of their taxi meters under the Omnibus Franchising Guidelines (OFG).

The OFG also requires taxi operators to install dashboard cameras and closed-circuit television in their units.

Below are some comments by commuters on social media: