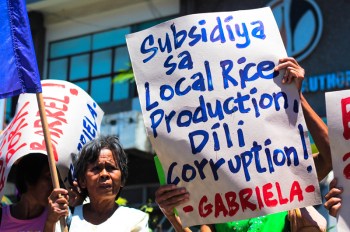 Some fifty women, many of them members of the Samahan ng Maralitang Kababaihang Nagkakaisa (Samakana) and the feminist group, Gabriela, created noise barrage outside the NFA gate on late morning, as employees peered on windows and went out at the lobby to look at the rally.

“We need to awake them [government agencies], because our pockets, our stomachs are empty,” Cora Espinoza,chairperson of Samakana, said.

She said prices of rice hovered at P32 and P34 for the cheapest varieties, and P47-P67 for the well-milled varieties. Before, she said, families could buy as cheap as P20 a kilo. She accused government of inaction.

Emerciana Alo, a 65-year-old resident, said her family could hardly afford to buy rice now, with many family members without work and grandchildren under her care.

Felimon Cangrejo, manager of NFA-Davao confirmed the rising prices of rice and blamed it on the declining supply going toward the harvest of season. But he said prices would begin to go down by the end of September once the harvest would begin replenishing supply and buffer stocks.

“The price of rice is still high in the market right now because at the buying price was already high by the time they bought the stocks from the suppliers,” Cangrejo told reporters in an interview inside his office. (Earl O. Condeza, davaotoday.com)